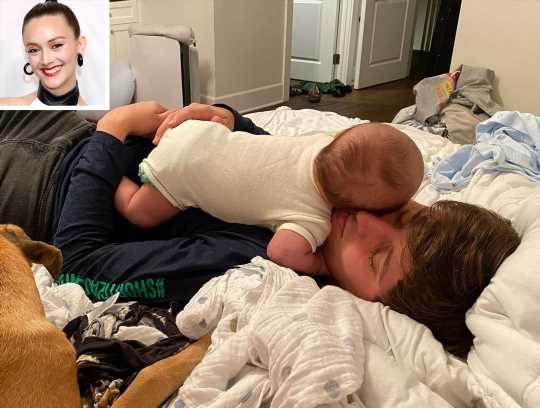 Billie Lourd is celebrating her fiancé Austen Rydell on his birthday.

On Saturday, Rydell turned 29 and the Booksmart actress marked the occasion with a sweet Instagram tribute that included new photos of their son Kingston, whom she welcomed in September 2020.

"IT'S MY FAVORITE HOLIDAY O THE YEAR – @avstenrydell 's BIRTHDAY!!!" she wrote in the caption alongside the photo series, which began with one of the couple cradling their newborn and ended with another of Rydell sleeping with their son.

"He's the best best friend / the best dad / best person to wake up to (even when we've only slept 1 ish hours) / best adventure partner / best human in general WOWWWW I AM SO OBSESSED WITH HIM," Lourd, 28, continued, adding some hashtags: "#sorryforthecaps #notreallytho #howelsecouldiexpressmyenthusiasum #DILF #waitno #DIDF and as frank sinatra says #youmakemefeelsoyoung !!!"

Having kept her pregnancy a secret, Lourd surprised everyone when she first announced the birth of her son in September, sharing a photo of the little boy's feet on her Instagram.

As the grandson of the late Star Wars actress Carrie Fisher, Kingston was fittingly dressed in a solar system onesie for the birth announcement. He was also wrapped in a blue and white fuzzy blanket.

Lourd and Rydell got engaged last June. In his announcement of the happy news on Instagram, Rydell wrote that saying "yes" to his proposal was a no-brainer for the Scream Queens alum.

In January, she opened up about how her fiancé cared for her while she was pregnant, calling him the "best dad in the world."

"He was so caring and incredible and cooked for me and gave me foot massages," she told stepdad Bruce Bozzi on SiriusXM's Quarantined with Bruce, adding that he "did these classes with me, like he did the lactation class, he did the positive birthing class. So he was with me every step of the way. And we just became even closer friends, even better partners. I think it prepared us to be the best parents and he's sitting out there with the baby right now."