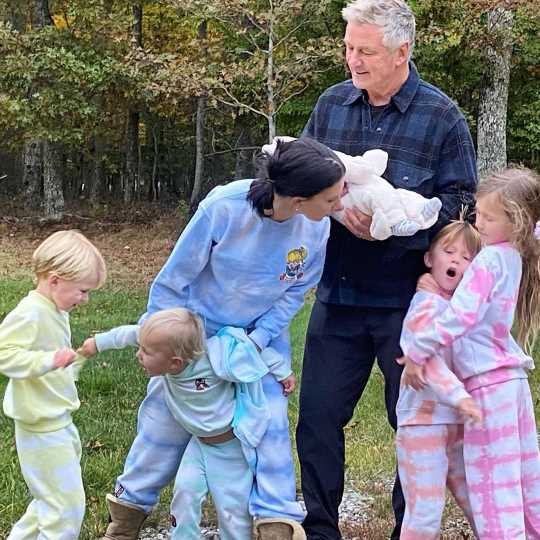 Could Hilaria and Alec Baldwin's family be complete?

After welcoming their fifth child together, son Eduardo "Edu" Pao Lucas, in September, the couple tells PEOPLE that they don't have plans for another baby.

"Everybody's asking me this question. I don't know. I've said in the past that I was done when I wasn't done. I think, right now, I'm so tired," Hilaria, 36, says. "And I feel, just with COVID, it's just insanity."

Before she can finish, Alec, 62, chimes in, "We're oh-so-done." With a laugh, Hilaria replies to her husband, "I want to ask you that in two hours, and we'll see what you say. I'll ask you in two hours."

"Right now," says Hilaria, "during times of COVID, it very much feels like we're done."

Prior to the pandemic, Hilaria explains that it "didn't ever feel" like she had a lot of children. "It really didn't … some of them would be at school, and then some would be in their Gymboree class. And then, on the weekends, we had so much fun," she recalls.

"We would go to museums and concerts and everything. Now, we're in the same house for eight months, not doing a lot, and all of a sudden it does feel like you have a lot of kids," says the fitness guru. "It's wonderful, but it does feel like there's a lot of them."

Although the couple both feel they're ready to cap their family, Hilaria says her children are always asking when the next sibling is coming.

"My kids are used to new siblings coming in, so they're already like, 'When is the next one going to come?' " she says with a laugh. "And I'm like, 'Guys, you and the entire world need to stop asking me that!' "

"They've been really great, though. They love [Edu]. They love babies," Hilaria adds. "It's actually really amazing to watch them because I know that they're going to be the kind of adults who are really good with kids because they just know so much." See All of the Celebrity Babies Born in 2020

Reflecting on all her children, the proud mom says she loves watching them grow into their own personalities.

"I think that they really are their own little individuals. Carmen is just fabulous. She's the boss. She's just so funny, and she's such a little adult that wants to hang out with Alec and I late at night," she tells PEOPLE.

"Rafa is hilarious. He's my fun one," continues Hilaria. "Leo is my real sensitive one; he's so sensitive and so sweet and wants to take care of everybody. Romeo is Mr. Independent — he's so independent. He looks the most like me, I think, because he's got my coloring and, I think, my features a little bit more."

And while little Edu continues along with his newborn baby life, Hilaria says she trusts Cuties Baby Diapers to keep him clean and dry.

"I love that Cuties is sustainable. They use good ingredients. They're a really thoughtful brand," she explains. "And I like that they don't leak. Pretty much, he can sleep in one of their diapers overnight and I'm not going to have a problem."