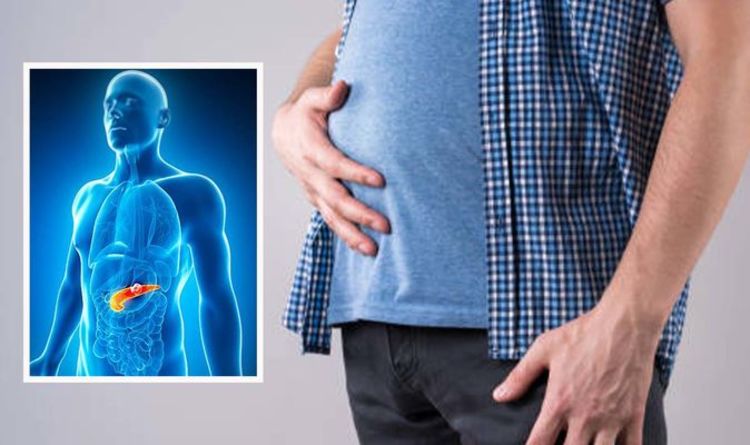 Pancreatic cancer often will not cause symptoms in the early stages, and the signs are often hard to distinguish from other issues. Sadly, incidence rates for pancreatic cancer are projected to rise by 6 percent in the UK between 2014 and 2035, to 21 cases per 100,000 people by 2035. There are several signs to be aware of, and if you have symptoms you should go to your GP.

Pancreatic Cancer UK explains that problems digesting food such as feeling full quickly when you eat, bloating, burping or wind, are all potential signs.

This is because pancreas plays an important role in breaking down food, so it is common for pancreatic cancer to cause problems with eating and digesting food.

It notes: “Symptoms of this include feeling full up quickly when you eat, bloating of your tummy, lots of wind, and burping.

“But these symptoms are common problems and aren’t usually due to pancreatic cancer.”

READ MORE: The simple movement that could burn same calories as 10 marathons in a year – Dr Mosley

Alongside having the potential to cause digestive problems, which may cause gas and bloating, pancreatic cancer can also cause bloating because of another issue.

PanCAN says that pancreatic cancer can also cause ascites, the build-up of extra fluid in the abdomen, and this causes the belly to swell and stretch out.

There are a number of other symptoms of pancreatic cancer.

These include pain in your tummy or back, losing weight without meaning to, jaundice, and changes to your bowel habits.

Cancer Research UK says that almost seven out of 10 people with pancreatic cancer go to their doctors because they have pain.

“People describe it as a dull pain that feels as if it is boring into you. It can begin in the stomach area and spread around to the back. The pain is worse when you lie down and is better if you sit forward. It can be worse after meals,” it says.

Many people with pancreatic cancer have jaundice when they first go to their doctors. Most of them will have pain as well, which can often be seen in the skin and eyes.

Cancer Council says: “Pancreatic cancer is often called the silent killer, and with good reason – most patients don’t experience symptoms until the cancer is big enough to impact the surrounding organs. Even then, the symptoms are often vague.”

It is possible that you are experiencing some symptoms because of another illness you might suffer from.

That is why it is necessary to get examined by a GP or a medical professional when you develop new symptoms or if your symptoms change and get worse.

Some lifestyle factors and certain medical conditions can increase the risk of pancreatic cancer.

For example, the American Cancer Society (ACS) says that smoking is one of the most important risk factors for pancreatic cancer.

It says: “The risk of getting pancreatic cancer is about twice as high among people who smoke compared to those who have never smoked.”

The NHS recommends losing weight if you are overweight and cutting down on alcohol.