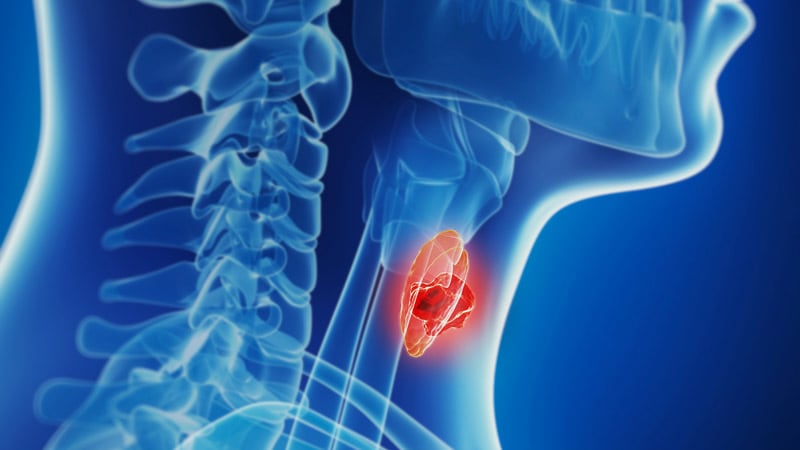 The global burden of thyroid cancer is substantial, and incidence rates are increasing in many developed countries including the Unites States, concludes a new analysis based on 30 years of observational data.

“We report overall increases in the burden of thyroid cancer across the majority of EU15+ countries between 1990 and 2019, evidenced by plateaus in incidence rates and reductions in mortality and DALY [disability-adjusted life-years] rates,” the authors report.

“However, in a number of countries, including the US, there are unfavorable increasing mortality and DALY trends over this time period…[and] a better understanding of the trends in the disease burden of thyroid cancer may help to inform future health-system planning,” they add.

For the analysis, James Schuster-Bruce, MBChB, from St. George’s University Hospital NHS Foundation Trust, London, United Kingdom and colleagues compared trends in thyroid cancer across 30 years of follow-up among 15 countries of the (pre-2004) European Union as well as those in the US, Australia, Canada, and Norway (EU15+).

Data from the Global Burden of Disease (GBD) study database were used to track these trends. “We extracted age-standardized incidence rates (ASIRs), age-standardized mortality rates (ASMRs) and DALYs for thyroid cancer from EU15+ countries between 1990 and 2019 using the dedicated GBD study results tool,” the investigators explain.

Australia, Denmark, and the US were the only countries showing positive AAPC changes, the team observes. For example, in the most recent period to 2019, Denmark and Australia had reductions in ASMR trends whereas in the US, the trend was toward increasing ASMRs

“It has therefore been suggested that an increase in subclinical disease has inflated the data to look more substantial than the clinical reality,” the authors write. However, they insist that overdiagnosis alone is unlikely to account entirely for increasing incidence trends in the current analysis.

Rather, their concern for countries with high incidence rates of thyroid cancer is the surveillance burden of disease that does not affect mortality. “Close observation of future time trends in thyroid cancer disease burden should be performed in the context of recent changes in international clinical practice guidelines, which have suggested more conservative diagnostic and management strategies,” the authors suggest.

“In the context of the more conservative treatment guidelines and reported increase in true disease, it is important to closely observe mortality and DALYs over the coming years to ensure optimum thyroid cancer management in these nations,” they add.

The study had no specific funding. Schuster-Bruce has disclosed no relevant financial relationships.