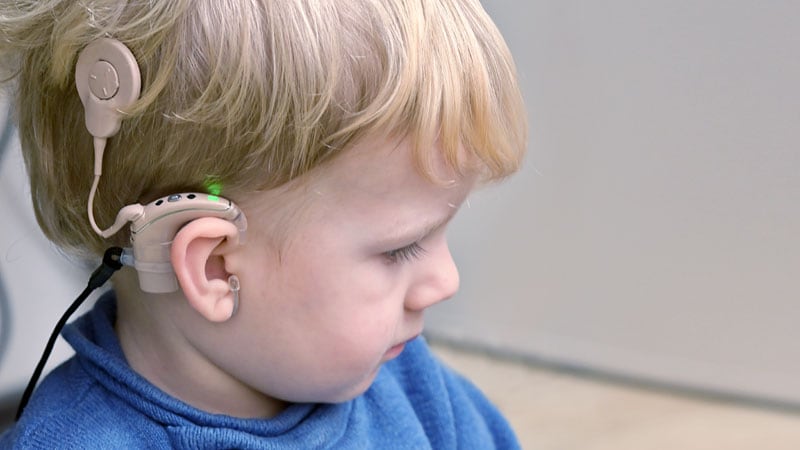 A new study in the journal Pediatrics pushes against the notion that children with low nonverbal cognition and adaptive functioning skills won’t improve if given cochlear implants. Some insurers cover hearing aids for children with developmental disorders but not the implants, which can cost between $60,000 and $100,000 per ear.

“We were surprised [by] the large magnitude of the improvements, not only in quality of life, but also in cognition, ability to function in daily living situations, and speech and language,” lead author John S. Oghalai, MD, of the University of Southern California, Los Angeles, told Medscape Medical News. “Remember, these are children with substantial developmental delays. Any improvements are incredibly important and meaningful.”

All children with severe hearing loss should be referred for cochlear implant evaluation, “regardless of the presence of other disabilities,” Oghalai said “The younger this referral happens the better the outcomes will be.”

Oghalai and his colleagues reviewed data from 204 children approximately 1-3 years old with hearing aids receiving treatment in Texas and California. Of these, 138 received a cochlear implant and had normal cognitive skills and social competence (referred to as adaptive behavior). Another 37 received a cochlear implant and also met criteria for early developmental impairment (EDI), defined by measures of nonverbal cognitive scores and adaptive functioning.

A third group of 29 children with EDI continued with hearing aids without a cochlear implant.

The children were evaluated annually for 1 to 5 years, with the average follow-up of 2 years. At baseline, no significant differences were noted between the children with EDI who received implants and those who did not on cognition, language, auditory skills, or measures of parental or child stress.

Overall, children who received implants scored higher on cognitive and social measures than those who continued using hearing aids.

Children who received implants, and their parents, also experienced less stress than those who did not receive the devices, according to the researchers.

Francis called the new research “reasonably powered and designed,” and said it “documents benefits in the cognitive, language and patient–child relationship domains” in children who received cochlear implants “compared to children with similar levels of developmental delay whose hearing loss was treated using hearing aids.”

However, “larger studies will be needed to account for potential effects of older age at intervention in the hearing aid group,” he said. Socioeconomic effects are a topic for future research as well, Francis added.

The researchers initially wanted to perform a controlled clinical trial. However, by the time they secured funding, health insurance policy had changed to cover cochlear implants for children without EDI because of demonstrated benefits shown in studies.

They also were unable to determine the reasons for families’ decisions to choose implants or hearing aids, and were unable to assess the impact of insurance on the choice of implantation. But they did find that families with insurers who would cover implants often did choose the devices. Children also were followed for an average of 2 years, so long-term outcomes are unknown.

Despite these limitations, the results support the value of cochlear implantation in children with disabilities and developmental delays, and should be discussed with parents, the researchers concluded.

“Cochlear implants are just a tool; they do not provide speech and language,” Oghalai said. “Any child with severe hearing loss requires significant therapy and education via sign language, auditory-verbal therapy, or both. Making the decision about what type of therapy to do is personal, and it depends upon the family and the options that are available to them in their community.”

The study was funded by the National Institutes of Health. The researchers and Francis have disclosed no relevant financial relationships.

Heidi Splete is a freelance medical journalist with 20 years of experience.