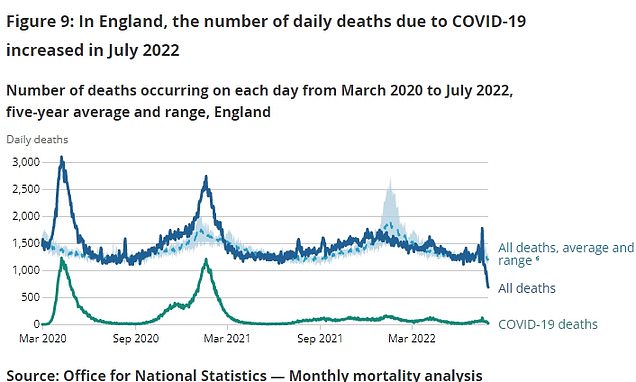 Up to 12% more Brits than usual died every DAY during last month’s heatwave, official data shows

Daily deaths from all causes spiked during the heatwave in England and Wales last month, analysis shows for the first time.

On average, 1,149 people in England and 74 people in Wales died per day in July, the Office for National Statistics found.

But this rose to 1,224 and 83 average deaths per day, respectively, on the days when temperatures soared.

This represented a 6.5 per cent and 12.3 per cent increase in daily deaths for Wales and England compared to non-heatwave days.

The ONS said ‘further investigation is required to understand’ the trends and investigate the deaths further.

But heatwaves are known to increase the risk of death for people with circulatory conditions or problems with their lungs or heart as their body struggles to keep cool.

Elderly people in general are also considered to be at higher risk, in part due to their age but also because they tend to live alone and may not drink enough.

Dangerously hot days were recorded between July 10 to 25 and again on July 30 to 31.

This included the temperature hitting a record 40.3C (104.5F) at Coningsby in Lincolnshire on July 19. 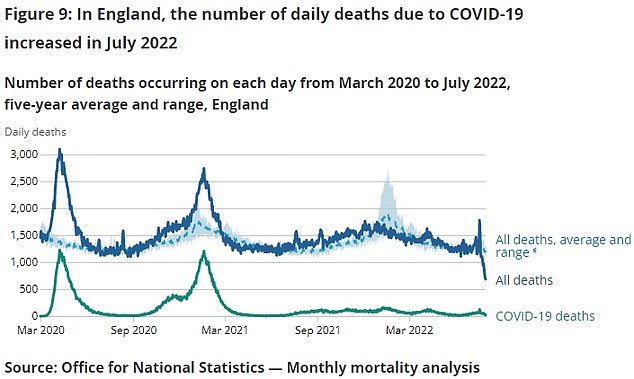 The ONS found to deaths recorded in July were 6.5 per cent in England on days when the country baked in high temperatures. Deaths from Covid were also found to spike by 31 per cent on these days, but are still far below levels seen during previous waves of the virus 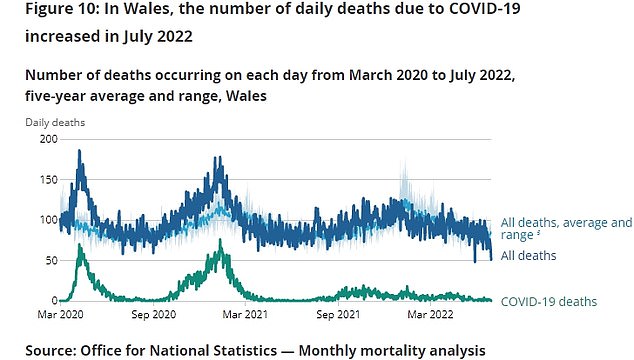 A similar patter emerged in Wales, where daily deaths rose 12 per cent during the heatwave, with Covid deaths also rising by 33.6 per cent, from three deaths per day to four

Covid deaths were also found to spike on those days, with levels rising 30 per cent on heatwave days.

In England Covid deaths rose to 60 per day during the heatwave, compared to 46 per day for the rest of the month, a rise of 31 per cent.

A similar pattern was observed for Wales where deaths from the virus rose from 3 per day to four during the heatwave.

Commenting on the data the ONS said the heatwave itself could have combined with other factors to cause this spike in deaths, adding that further investigation was underway.

The analysis comes as separate ONS report found almost 1,000 more people than usual died in England and Wales in the week ending August 12.

Nurses will be flown in from Nepal to fill NHS staff shortages despite a global ban on recruitment from the country due to its own workforce struggles.

Initially Up to 100 nurses from Nepal are set to work at Hampshire Hospital NHS Foundation Trust under a pilot scheme running until the end of next year.

But ministers hope it will pave the way for thousands more Nepalese nurses to join the NHS and for the scheme to be widened across the nation.

Britain has agreed to recognise their qualifications, giving the medics the automatic right to work in the NHS without having to sit further exams.

Their flights, visas and registration fees will also be paid for.

It comes as part of an international hiring spree to fill around 50,000 nursing and midwifery vacancies in time for winter, when the NHS crisis is expected to worsen.

The move comes despite Nepal being on a World Health Organization ‘red list’ to prevent health workers from countries with shortages from being poached.

Unions have hit out at officials who are ‘over-relying’ on foreign medics and failing to recruit and retain British staff.

In total, the countries recorded 10,355 deaths for that week which is 10 per cent higher than the five-year average.

It is latest in a series of reports from the body highlighting an ongoing spike in excess deaths compared to historical levels.

Critically Covid itself isn’t wholly to blame, with the ONS only recording 356 deaths where the virus was the underlying cause of death.

Experts have said the rise in deaths could be a consequence of the pandemic’s disruption to healthcare leading to missed or delayed diagnosis for conditions like cancer.

Others have pointed to the recent wave of A&E pressures that have seen some Britons stuck waiting in ambulances for over 24 hours as a potential culprit.

The figures come after sustained warnings from scientists who warned that shutting down society and cancelling operations during the pandemic could cause the worsening of other conditions like cancer, diabetes and heart disease.

The number of patients seeking NHS treatment plummeted during the pandemic, as Britons were told to stay at home and some sought to avoid piling pressure on the struggling health service.

An estimated 13m patients are expected to be waiting for routine care by 2024 because of pandemic-induced delays and patients returning to the health service after putting it off during Covid.

UK-wide figures from the ONS showed a similar pattern to England and Wales with 11,782 deaths recorded that week, 1,082 more than usual compared to recent years.

Professor Paul Hunter, an infectious disease expert at the University of East Anglia, said a multitude of factors could be to blame for the rise in excess deaths.

He said among these was the impact of the pandemic lockdown and NHS resources being focussed on the virus at the time.

‘Indirect impact of pandemic on things like delays in diagnosis and treatment either because of restrictions or because health services stretched by large numbers of Covid infections,’ he said.

Professor Hunter added that lockdown reduced people’s exercise levels and battering their mental health could have also played a part.

Echoing the other ONS report today, he added that recent record-breaking heatwaves could also have caused more Britons to die than normal. 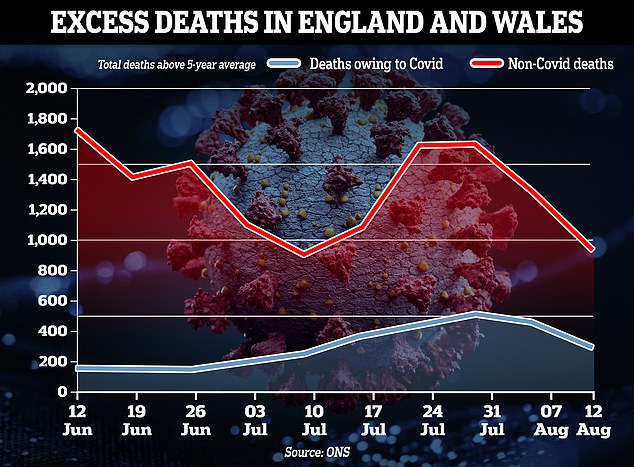 Excess deaths are about 1,000 higher compared to five year averages a trend some experts have pinned on the pandemic delaying healthcare while others have said A&E delays could be to blame

Professor Sir David Spiegelhalter, an eminent statistician from Cambridge University also said the excess deaths could be caused by a range of factors.

He said ambulance delays and pressures in A&E were one of the primary causes.

‘The excess non-Covid deaths are spread over a range of causes requiring emergency care, and so I think are primarily due to the huge problems in healthcare at the moment, shown in ambulance delays, and long waits in A&E,’ he said.

‘This is not due to lockdown or any specific measures, but reflects general issues in the NHS, exacerbated by the pandemic.’

Excess deaths have risen as summer Covid wave has continued to crash, with just one in 40 people in England infected on any given day in the first week of August.

ONS analysts estimate just over 1.4million people had the virus in the week up to August 6.

This was down 32 per cent on the week ending July 26, when the figures were previously updated.