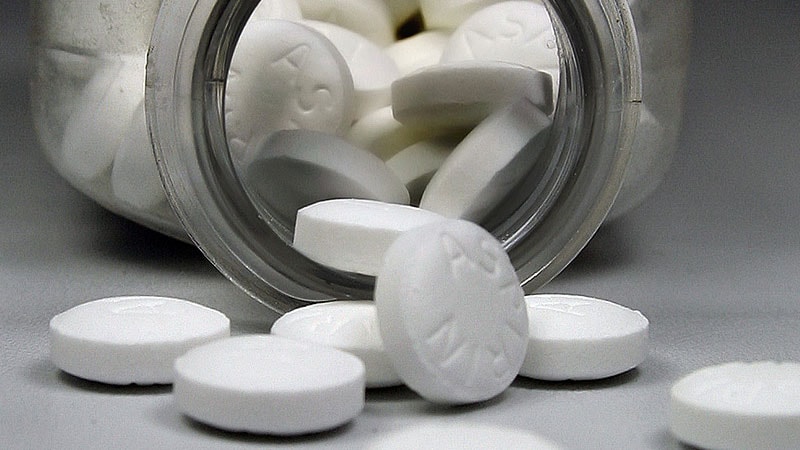 The US Preventive Services Task Force (USPSTF) has published a final recommendation statement on aspirin use to prevent cardiovascular disease.

The statement advises against starting aspirin for the primary prevention of cardiovascular disease in individuals aged 60 years or older.

For people aged 40-59 years, the USPSTF suggests that aspirin could be considered in those at increased risk of cardiovascular disease (10-year risk of 10% or greater) but that the decision should be individualized.

It notes that in the 40-59 age group, evidence indicates that the net benefit of aspirin use is small, and that persons who are not at increased risk for bleeding are more likely to benefit.

It adds that these recommendations only apply to people who do not have a history of cardiovascular disease and are not already taking daily aspirin.

The USPSTF statement was published online today in the Journal of the American Medical Association. It is accompanied by an evidence review, a modeling study, a patient page, and an editorial.

The Task Force concludes that there is adequate evidence that low-dose aspirin has a small benefit to reduce risk for cardiovascular events (nonfatal myocardial infarction and stroke) in adults 40 years or older who have no history of cardiovascular disease but are at increased cardiovascular risk.

Evidence shows that the absolute magnitude of benefit increases with increasing 10-year cardiovascular risk and that the magnitude of the lifetime benefits is greater when aspirin is initiated at a younger age.

But it adds that there is also adequate evidence that aspirin use in adults increases the risk for gastrointestinal bleeding, intracranial bleeding, and hemorrhagic stroke. The USPSTF determined that the magnitude of the harms is small overall but increases in older age groups, particularly in adults older than 60 years.

For patients who are eligible and choose to start taking aspirin, the benefits become smaller with advancing age, and data suggest that clinicians and patients should consider stopping aspirin use around age 75 years, the statement advises.

It also says that evidence is unclear whether aspirin use reduces the risk of colorectal cancer incidence or mortality.

USPSTF vice chair Michael Barry, MD, director of the Informed Medical Decisions Program in the Health Decision Sciences Center at Massachusetts General Hospital, Boston, told theheart.org | Medscape Cardiology that these recommendations only apply to patients not taking aspirin already and who have no evidence of existing cardiovascular disease.

“In adults aged 60 or over we do not recommend starting aspirin for primary prevention. That is because in this age group the risk of bleeding outweighs the cardiovascular benefit,” he said.

“For adults aged 40-59 years with a greater than 10% predicted risk of cardiovascular disease, there appears to be a net benefit from taking aspirin, but this net benefit is relatively small and will vary with other factors such as magnitude of cardiovascular and bleeding risk. People should talk to their physician about these factors and whether to take aspirin or not,” he added.

Barry noted that these recommendations do not apply to people who are already taking aspirin for primary prevention. “These people need to talk to their physicians about whether they should continue. They need to review the reasons why they started aspirin in the first place, and they need to have their bleeding risk evaluated. Someone who has taken aspirin long term without any bleeding complications has a lower risk of future bleeding complications,” he said.

The Task Force recommends an aspirin dose of 81 mg daily for those people deciding to take aspirin for primary prevention.

“There is an abundance of evidence that less than 100 mg a day is enough. The lower the dose the lower the bleeding risk. So, the most convenient dose is the widely available 81 mg baby aspirin tablet,” Barry noted. “While enteric coated products are meant to reduce gastric irritation, the data do not show any difference in bleeding risk between various aspirin formulations,” he added.

Barry pointed out that aspirin is just one tool for reducing cardiovascular risk.

“People can reduce their risk significantly in many other ways including taking regular exercise, eating a heathy diet, controlling blood pressure and diabetes, and by taking statins if they are at increased cardiovascular risk.”

He noted that recent trials have suggested that aspirin only has a marginal value over and above all these other factors. And the risk reduction with aspirin is smaller than with some other interventions.

“For example, aspirin is associated with a 12% reduction in MI whereas statins are associated with a 25%-30% reduction. Statins are a more powerful tool in reducing cardiovascular risk than aspirin, so perhaps people should consider taking statins first. The benefit of aspirin may be smaller in individuals already taking a statin, and clinicians need to think about the big picture,” Barry said.

He explained that physicians need to evaluate the cardiovascular and bleeding risk in each individual patient. “While there are widely available tools to estimate cardiovascular risk, there are no easy tools yet available to evaluate bleeding risk, so physicians need to consider clinical factors such as history of peptic ulcers.”

He suggests for the many people who have an average bleeding risk, then personal preference may come into play. “In the 40-59 age group, the benefits and harms of aspirin are pretty well-balanced. For the average person we think there may be a small net benefit, but this is small enough for personal preference to be considered as well.”

Pendulum Swinging Away From Aspirin Use

In an editorial accompanying publication of the Task Force statement in JAMA, Allan S. Brett, MD, clinical professor of internal medicine at the University of Colorado School of Medicine, Aurora, explains that the USPSTF recommendations on aspirin use for primary prevention of cardiovascular disease have changed numerous times over the past 30 years, with the last update in 2016 narrowing the eligible population.

In the new recommendation statement, “the pendulum has swung further away from aspirin prophylaxis for primary prevention: the guideline does not recommend routine preventive aspirin for anyone,” Brett notes.

He points out that an important development between the 2016 and current version was the publication in 2018 of three large placebo-controlled randomized clinical trials of primary prevention with aspirin — ARRIVE, ASPREE and ASCEND — which taken together “cast doubt about net benefit for aspirin prophylaxis in current practice.”

Asked how physicians should go about “individualizing” the decision on the use of aspirin in the 40-59 age group at increased cardiovascular risk, Brett suggests that some patents will have a general philosophy of medical care of “don’t prescribe medication for me unless there is strong evidence to support it,” while and others may favor preventive interventions even in borderline cases.

But he notes that many patients have no strong general preferences and often ask a trusted clinician to decide for them. “For such patients, the best approach is for clinicians to be knowledgeable about the data on primary prevention with aspirin. Close reading of the new USPSTF guideline and its companion Evidence Review, and becoming familiar with the 3 more recent aspirin trials, is a good way to prepare for these clinical encounters,” he concludes.

Commenting on the Task Force statement for theheart.org | Medscape Cardiology, Andrew Freeman, MD, a cardiologist at National Jewish Health, Denver, Colorado, noted that cardiology societies are already making similar recommendations on aspirin use in primary prevention. “The American College of Cardiology prevention guidelines have been giving similar advice for a couple of years now. It takes a few years for professional societies to catch up with each other,” he said.

“Over the last few years, it has become obvious that the benefit of aspirin is not really very positive until a patient has had a cardiovascular event. In primary prevention, it doesn’t become beneficial unless they are at quite a high risk of having an event,” Freeman noted.

“In general, most cardiologists are now telling people that, despite what they may have been told in the past, they don’t need to be on aspirin unless they have had a cardiovascular event,” he added. “Our understanding has changed over the years and the weight of evidence has now become clear that the risk of bleeding is not insignificant.”

Freeman agreed with the shared decision-making advocated for patients in the 40-59 age group. “If a patient is particularly worried about a family history of heart disease, taking aspirin may make some sense, but for most people who have not had a cardiovascular event, the net benefit is very low and gets lower with age as the bleeding risk increases,” he said.

The USPSTF is an independent, voluntary body. The US Congress mandates that the Agency for Healthcare Research and Quality (AHRQ) support the operations of the USPSTF.