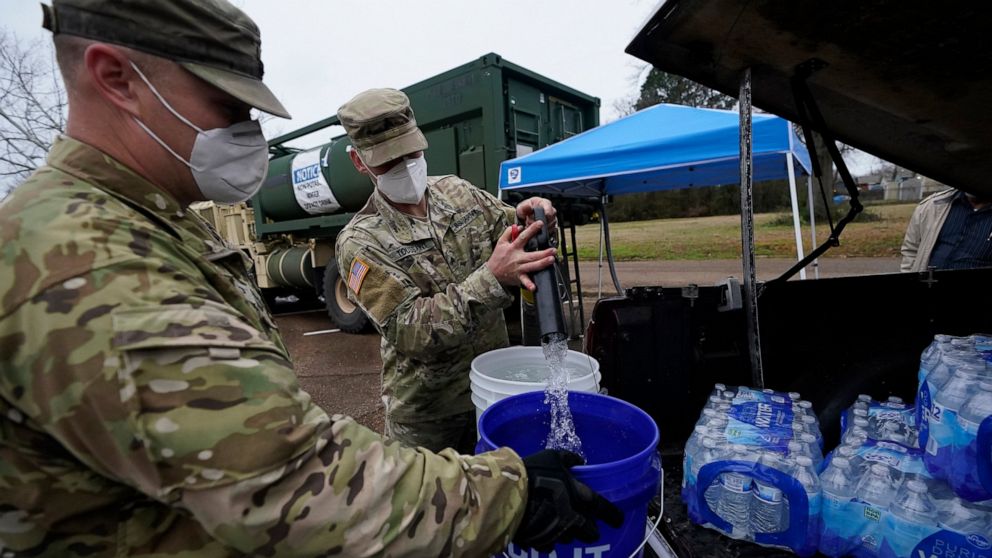 JACKSON, Miss. — Frustrations are mounting in Mississippi’s largest city, more than two weeks since winter storms and freezing weather ravaged the city’s water system — knocking out water for drinking and making it impossible for many to even flush their toilets.

For more than two weeks now, residents in the city of 160,000 have been warned to boil any water that does come out of kitchen taps before using it.

“I pray it comes back on,” Jackson resident Nita Smith said. “I’m not sure how much more of this we can take.”

Smith has not had water at her house for nearly three weeks now, she said.

Smith is concerned about her mother who has diabetes, since not having water makes it difficult to take her medicine. Her mother and most of the other elderly people on her street don’t drive anymore, so she’s been helping them get water to clean themselves and flush their toilets, she said.

A key focus of city crews this week is filling the system’s water tanks to an optimal level, officials said in an update late Tuesday. Workers are also continuing to fix dozens of water main breaks and leaks throughout the capital city.

But they have given no specific timeline for when the crisis will be resolved.

Bonnie Bishop, 68, and her husband, Mike, 63, have been without water at their Jackson home for 14 days as both struggle with health problems.

She’s recovering after a three-and-half-month hospital stay with the coronavirus and back at home but still in therapy to learn how to walk again and deals with constant neuropathy in her hands and feet.

She has not been able to soak her feet in warm water, something that usually helps with the neuropathy, or help her husband with gathering water to boil for cooking for cleaning.

Mike Bishop just had surgery on his elbow. The first week of the couple was without water, he still had staples in his arm and was hauling five-gallon containers from his truck, his wife said. Bonnie Bishop said she told her husband not to strain himself, but he wouldn’t listen. They need water, and feel like they have no choice.

“It’s a lot of wear and tear on the elderly,” she said.

On Monday, the couple drove 25 miles (40 kilometers) to Mike’s mother’s house to do laundry.

“My greatest concerns are sanitation and hygiene,” Bonnie Bishop said. “I am sure that is everyone’s concern.”

Jackson’s water system has not been able to provide a sustainable flow of water throughout the city since the mid-February storms, city officials have said.

“Our system has basically crashed like a computer and now we’re trying to rebuild it,” Jackson Public Works Director Charles Williams said at a recent briefing. The city does not have exact numbers of people still without water, Mayor Chokwe Antar Lumumba has said.

The city’s water mains are more than a century old, and needs related to its infrastructure have gone unaddressed for decades, the mayor said.

“We more than likely have more than a $2 billion issue with our infrastructure,” he said.

Melanie Deaver Hanlin, who was without water for 14 days, was flushing her toilets with pool water and showering at friends’ homes. She said serious updates need to be made to Jackson’s water system.

“The problem needs to be fixed, not patched,” she said. “That’s the issue now — poor maintenance for far too long, and Jackson residents are paying the price.”