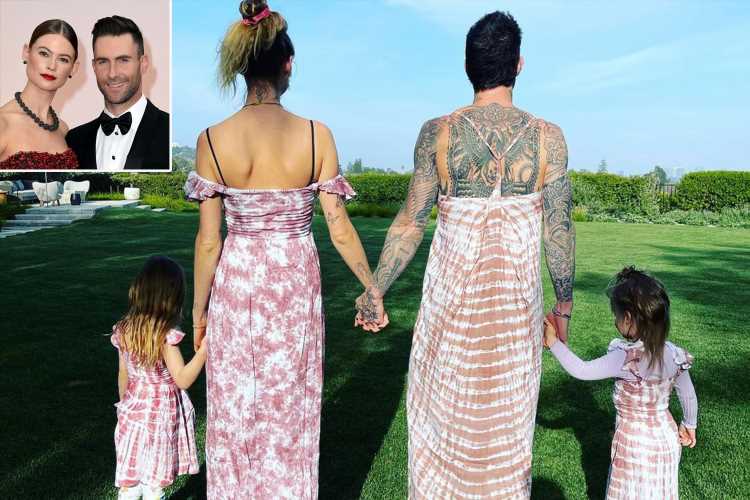 Adam Levine is having some fun with fashion!

On Tuesday, the Maroon 5 frontman, 42, shared a photo of himself and wife Behati Prinsloo wearing matching dresses with their daughters: Dusty Rose, 4, and Gio Grace, 3.

In the cute family picture, Levine coordinates with one of his girls in a blush pink halter maxi dress from Tiare Hawaii.

Meanwhile, Prinsloo, 32, matches with their other daughter in an off-shoulder frock with another tie-dye pattern by the same label.

All four can be seen holding hands as they pose with their backs to the camera.

Prinsloo reposted the snap on her Instagram Stories, tagging the fashion brand behind the dresses alongside the emoji: "🙏😂." Prinsloo commemorated the milestone by posting a silly selfie of the mother-daughter duo on Instagram.

"my bestie turned 3. 👽👽," the model wrote alongside a picture of the pair with an otherworldly filter to the photo, giving them large ears and cartoonish eyes. Last April, Levine opened up about the possibility of him and Prinsloo expanding their family.

In an interview with Howard Stern on his Sirius XM show, the singer said his wife is content with being a mother of two at the moment.

"I think if I asked her to have another baby right now she'd punch me in the f—— face because she's not ready," he said. "We're good. We've got two kids."

Prinsloo also shot down pregnancy rumors a month earlier after fans had confused a blurry photo on her Instagram with a sonogram.

"Guys. This is not an ultrasound lol," she wrote while updating the caption, explaining that it was actually just a close-up shot of her "black and white splatter sweatpants."

The mother of two added, "Dusty got hold of my phone and somehow posted this picture from my photo library I thought it was weird and cool and left it up. But everyone is now congratulating me on my 3rd pregnancy."

However, that's not to say that Prinsloo hasn't ruled out on having more children in the future.

"It's not out of the question," Prinsloo told PEOPLE in 2019, as she spoke about the couple's open-ended plans to give their daughters a sibling. "I grew up an only child, so I always wanted a big family."