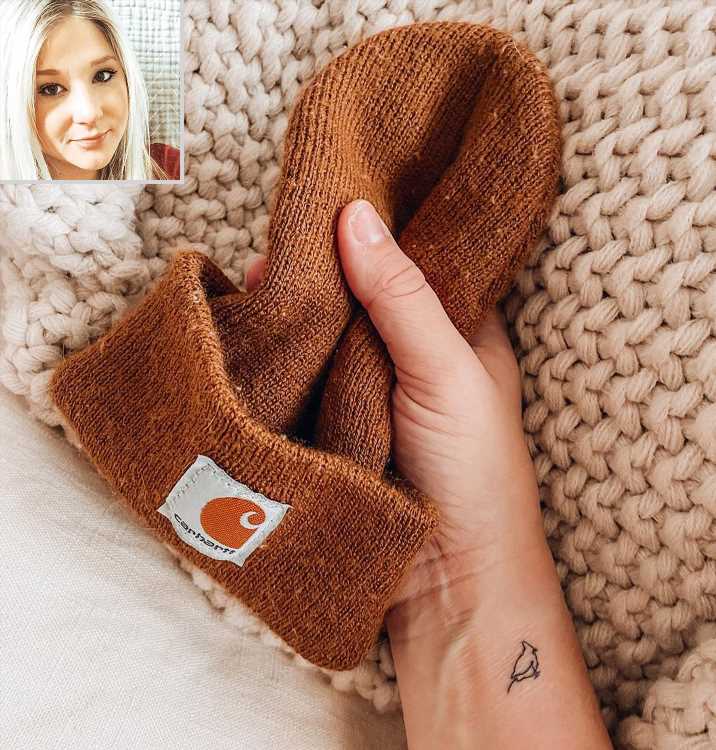 Brittani Boren Leach is paying tribute to her baby boy Crew one year after his sudden, tragic death.

The YouTuber and her husband, Jeff, lost their 3-month-old last year after he was found unresponsive while napping on Christmas Day. She announced the tragic news that Crew had died two days later, sharing a photo of her cradling her baby boy's body, with her husband beside her.

On Wednesday, Leach shared a photo of a brown beanie clutched inside her hand and began her heartbreaking caption, addressing Crew, "One year ago I held your hand for the last time and kissed your bald head as tears poured from my eyes. One year ago I rode down the halls next you as people paid tribute to your life as a hero."

"One year ago I said 'Goodbye for now' outside of OR doors," she continued. "One year ago I walked out of a hospital with aching empty arms and a shattered heart. I'm strong because I have to be, but today I don't want to be. Sometimes I cry out to God and beg him to let me hold you one more time."

"But God knows my work here isn't done, so he sends a Cardinal to comfort my heart until I can hold you again," the grieving mom added of the tiny bird tattoo on her wrist, visible in the photo. "Every time I look down at this tiny Cardinal, it will be a reminder that you are always with me. I miss you Crew, and everyday is just one more day closer to you. 🤍" Leach was joined by Jeff, their sons Cooper and Cash, Leach's son Carter and Jeff's daughter Sydney back in September when the family paid a visit to Crew's grave, on what would've been the baby boy's first birthday.

"Happy birthday baby," the social media influencer wrote atop a photo on her Instagram Story of Crew's grave, covered with candles and gifts from his parents and siblings.

On another image of the grave, the mom wrote, "All the gifts from his siblings. He is so loved."

Leach filmed the family of six sitting in front of the grave singing "Happy Birthday" with a candle-lit birthday cake, which they ate on the grass together afterwards.

In a heartfelt message shared in August, Leach opened up about her emotions ahead of Crew's birthday and the anniversary of his death.

"His birthday is coming up in a few weeks and every single day that it gets closer, it kills me," said Leach. "And everybody's starting to decorate their house for fall, and that also kills me because after fall is Christmas, and I don't wanna decorate for Christmas. I just wanna skip over [it]; I just wanna go to January."

In May, Leach and her husband announced that they were expecting another baby boy in early December. Their son, Cole Dean, arrived early on Nov. 12.

The family embarked on "a little getaway" over the Christmas holidays, during which Leach shared a pair of adorable snapshots of Cole and wrote in her Sunday post, "We even had a visit from a cardinal today … and there's NO doubt our Crew is here with us. ❤️ Swipe to see the next picture of Cole, it reminds me so much of big brother Crew's smile. 😭"