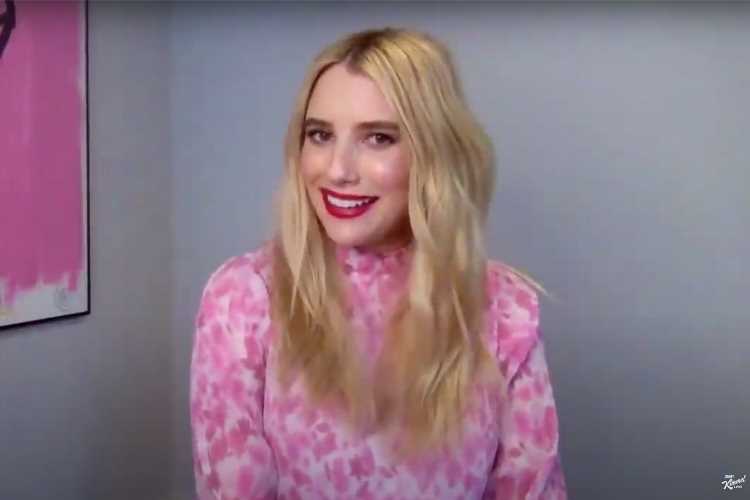 The news of Emma Roberts' pregnancy didn't stay secret for long — thanks to her mom, Kelly Cunningham.

The actress, who is currently expecting her first child, a boy, with boyfriend Garrett Hedlund, revealed Monday on Jimmy Kimmel Live! that her mom accidentally "spilled the beans" about the star's pregnancy on social media.

"I was keeping my pregnancy pretty low-key, but unfortunately my mother has Instagram. Mothers and Instagram, it's a bad combination," Roberts told host Jimmy Kimmel. "She spilled the beans."

"You have to understand about my mom, she doesn't own a computer and she had a flip phone until about three years ago," she continued. "For Mother's Day, I got her an iPhone, because I was like, 'Now we can FaceTime and iMessage.' It was such a lovefest, and it was the worst thing I ever did."

The Scream Queens alum explained that Cunningham got Instagram and initially only had "a couple hundred followers" — but soon that "grew to a couple thousand, which grew to she had no idea what she was dealing with."

Soon, Cunningham began direct messaging with her daughter's fans on Instagram and accidentally confirmed the actress was pregnant. "It was a disaster, and I found it all out on a plane so I couldn't get to her, I couldn't call her or attack her," Roberts said. "I could just iMessage with her and DMed her and ask her to please stop."

"She was like, 'Thank you so much for the well wishes, we are so excited,' " the actress recalled of her mom's messages to some of her fans. "My friends were sending me screengrabs, it was like unbelievable. And then when I said to her, 'Mom you revealed my pregnancy,' she goes, 'Emma, you announced it.' And I said, 'No I didn't, that was a tabloid.' She was like, 'Oh, that wasn't clear.'"

While the American Horror Story star said the mother-daughter duo "kind of laughed" about the mishap, they also "kind of got into a fight."

"I blocked her at one point. It was my only weapon," Roberts said with a laugh. "She texted me at 2 a.m., 'Queen, did you block me, question mark, sad face.' And I said, 'Yes, I did block you.' And then I unblocked her. It's been an Instagram war with my mother that I never saw coming. It's a good story to tell the baby." In late August, Roberts announced that she and Hedlund, 36, are expecting their first child together. A source close to Hedlund told PEOPLE at the time that he and Roberts are "very serious" in their relationship, and "beyond excited to be having a boy."

"Garrett thinks Emma is amazing. They will be great parents," the source added.

Never miss a story — sign up for PEOPLE's free daily newsletter to stay up-to-date on the best of what PEOPLE has to offer, from juicy celebrity news to compelling human interest stories Earlier this month, Roberts celebrated the upcoming arrival of her son with a socially distanced garden baby shower attended by close family and friends. Hedlund, Kristen Stewart and Camila Morrone all made appearances at the event.

"Emma wore a dress that showed off her cute baby bump and a matching mask," a source told PEOPLE. "She was very excited. She received many wrapped gifts for their baby boy."