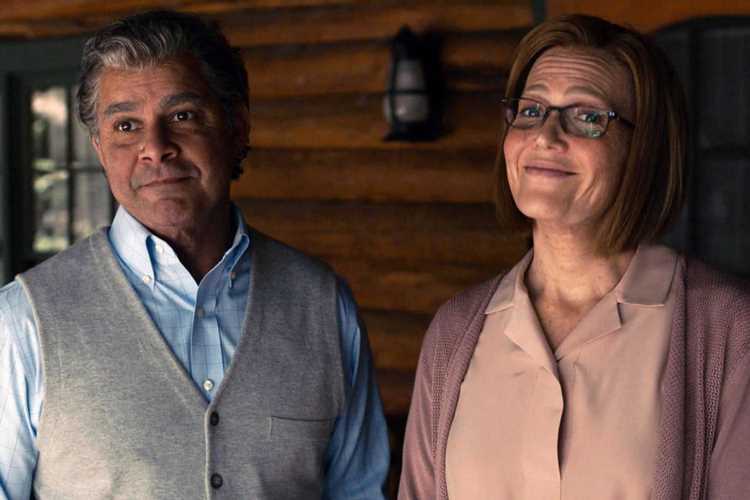 Mandy Moore in This Is Us The This Is Us actress announced in September 2020 that she is expecting a baby with husband Taylor Goldsmith, which means that the hit show will have to work around her baby bump.

Not to worry,  the show’s creator Dan Fogelman told reporters during a virtual panel attended by PEOPLE, “We haven’t really adjusted our plan. We’re just going to work Mandy right ’til go time. Amongst the many challenges of this season of production [during the COVID-19 pandemic], that’s not a big one.”

He did joke that we may not see Moore play the older version of her character, Rebecca Pearson as much “because she would have some really complicated explaining to do.”

Moore’s co-star Chrissy Metz told ET to expect some creative solutions: “Mandy gets to go back and forth in time; luckily she’s pregnant sometimes and so she can kind of cover up her belly. They’ve done a brilliant job of working around it. I don’t know how, I guess it’ll be magic.” Deschanel was pregnant with daughter Elsie Otter in 2015 while filming the hit show New Girl. The show runners found creative ways to hide her bump, like having Deschanel’s character, Jessica Day, get injured and ride around on a motorized scooter, and eventually sending her character off to jury duty when Deschanel needed to take her maternity leave.

Lauren Lane in The Nanny When Lane became pregnant during the fifth season of The Nanny, the show’s writers included clever allusions to her poorly hidden baby bump, including a moment where Lane’s Broadway producer character C.C. Babcock holds the poster for the musical Baby in front of her body. There was no chance that Jane Krakowski’s self-centered and deluded 30 Rock character would have a storyline to incorporate Krakowski’s own pregnancy; as Tina Fey and the show’s executive producer Robert Carlock told EW, “At this time, we plan to shoot around Jane’s pregnancy, because no child should have Jenna Maroney for a mother.”

They worked around her bump by dressing her in a dog suit and having her character gain weight for a role in Mystic Pizza, The Musical. Lisa Kudrow become pregnant in 1997 with her son Julian Murray Stern. Rather than attempt to hide her bump, the show’s writers created a season four storyline in which her character, Phoebe Buffay, becomes a surrogate for her brother’s triplets. Part of Monica Gellar’s storyline was that she could not get pregnant, so when Cox was expecting during the final season of Friends, she hid her bump with jackets, loose clothing and scarves. It was still pretty obvious.

Amy Poehler in Parks and Recreation Poehler’s character, Leslie Knope, already had a penchant for wearing suits, making it relatively easy to conceal Poehler’s pregnancy (with son Abel, born in August 2010) behind blazers – and hunting overalls – in the show’s second season. The show also opted to film the first six episodes of the third season in succession with the second so that they could give Poehler a maternity leave.

Kristen Bell in House of Lies Though Bell’s second pregnancy 2013 (with daughter Delta) was written into the show, Bell’s first pregnancy (with daughter Lincoln) was not. The show’s producers worked around it with their usual tricks (big bags, blazers and camera angles) but also went the extra mile and used CGI.

The actress explained while being interviewed by Conan O’Brien in 2014 that she and costar Adam Brody had a sex tape scene to film while she was seven months pregnant. “I had this huge beer belly, this huge gut and I was pretending to act in a sex tape,” the actress said. “And now I can forever look at my daughter and go, ‘Oh, you were present for that!'”

Bell said that Brody “affectionately refers to our sex scenes as threesomes because my belly was just on top of him. Is it really that gross?”

Christian Serratos in The Walking Dead When the star became pregnant in 2017 during the show’s seventh season, the actress traded in her usual crop tops for baggier clothes and well-placed weaponry.

Her character, Rosita, was also injured at the end of season seven, giving her character an excuse to recuperate at the start of season eight – and Serratos time off with her little one. When Leeves, who played Daphne Moon on Frasier, became pregnant, writers on the show made her storyline about becoming addicted to food. Then, her character was sent away to lose the weight, and came back (after Leeves gave birth) at her original size. January Jones also had to don a fat suit when she was pregnant while filming Mad Men.

On the show, Betty Draper’s obsession with being thin and perfect turned into an obsession over weight gain when she was diagnosed with a benign tumor on her thyroid in season five. Washington was pregnant with her first child, Isabelle Amarachi, when she filmed season three of Scandal. If you watch the season back, you can see Washington’s bump being concealed by everything from clever camera angles and other actors to gorgeous outwear and the ever-so-popular “holding a prop in front of her bump” method.

Debra Messing in Will and Grace Messing didn’t fool anyone while pregnant during Will and Grace’s sixth season, though she attempted to hide her bump with everything from flowers to towels. No matter what, it was always pretty obvious that the star was expecting.

Messing ended up not appearing in the last four episodes of the season because she was put on bed rest.

Phylicia Rashad in The Cosby Show Rashad became pregnant in the show’s third season, so the producers relied on the usual tactics to cover up her bump. The most clever was having Rashad fall ill and hollowing out a piece of a mattress so that she could lie in bed without showing her growing belly. While the show hid Fumero’s first pregnancy in 2016 — except for one episode in season four where her character, Amy, pretended to be pregnant during a sting operation — when she got pregnant during season seven, the writers wrote her pregnancy into the storyline so that they wouldn’t have to hide it.

Fumero told PEOPLE in 2016 that filming while pregnant is not easy.  “[Enzo] was born, like, five days after we wrapped. I don’t recommend it.” The Modern Family star was actually eight and a half months pregnant while filming the pilot episode of Modern Family! They hid her bump with pillows, laundry baskets and camera angles.

Sarah Jessica Parker in Sex and the City We couldn’t help but wonder, how did Sarah Jessica Parker hide her pregnancy while filming the fifth season of Sex and the City in 2002?

Well, the season was shortened from 13 episodes to just eight, and the actress wore babydoll tops and dresses to mask her growing belly. When the actress became pregnant with twins during the show’s third season, the showrunners made sure to keep it under wraps by shooting the star mostly from the chest up.

Two episodes of the show were filmed in Cross’s actual home (made up to look like her character Brie’s) because the actress was on bed rest! The actress became pregnant during the fourth season of Angel, and has alleged that her pregnancy announcement spurred creator Joss Whedon to fire her, because it didn’t align with his vision for the show.

Before killing her character Cordelia off, her pregnancy was written into the show: She was pregnant with a demon baby, then was put into a coma, then finally died (after helping Angel find his true calling again).

Alyson Hannigan in How I Met Your Mother The actress was pregnant twice while filming How I Met Your Mother, though the second pregnancy was written into the show’s plot.

For her first pregnancy in season four, Hannigan distracted from her bump with everything from globes to purses to a hot dog eating competition, where she rubbed her “food baby” after her victory.

Cobie Smulders in How I Met Your Mother Smulders was also pregnant during season four of How I Met Your Mother, though her character’s storyline included the fact that she was unable to have children so her bump needed to remain out of sight. They did so by hiding her underneath loose-fitting clothing and behind inanimate objects.

Lucille Ball in I Love Lucy During the second season of I Love Lucy, the star became pregnant with Desi, Jr., her second child with husband and costar Desi Arnaz.

As a result, Ball became the first actually pregnant woman to play a pregnant woman on television and she couldn’t even say the word “pregnant;” instead, they said she was “expecting.”

Ball also had to hide her bump under large clothing and aprons as her fictional character was not as far along as she was.

Gillian Anderson in The X-Files Anderson’s pregnancy was hidden in the most X-Files way ever: With an alien abduction in season two.