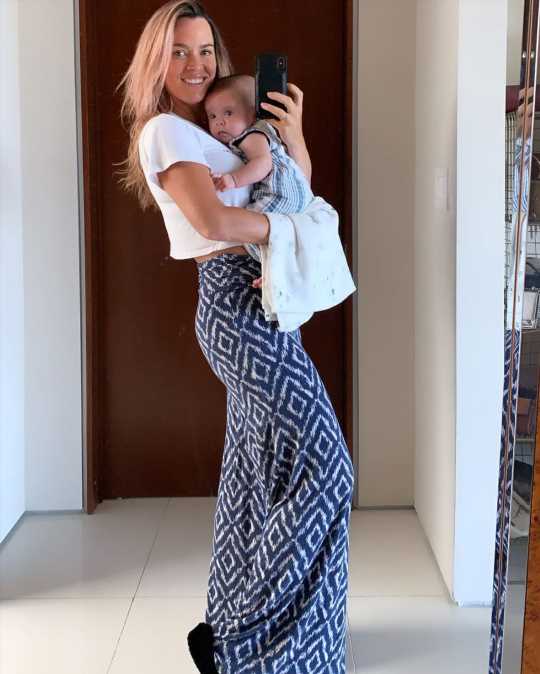 We felt cute, may delete later 🤣 But for now, any mamas (or future mamas) out there with questions for me regarding 👶, ask away and I’ll answer as many as I can 💕 #cozypants @lisarinna We felt cute, may delete later 🤣 But for now, any mamas (or future mamas) out there with questions for me regarding 👶, ask away and I’ll answer as many as I can 💕 #cozypants @lisarinna

Teddi Mellencamp Arroyave's mantra as her 4-month-old daughter Dove's neurosurgery date approaches is "one foot in front of the other."

On Monday's episode of her Teddi Tea Pod podcast, The Real Housewives of Beverly Hills star opened up about the emotional moments she learned her baby girl would need surgery after doctors diagnosed her with lambdoid craniosynostosis — which she previously described as "a very rare type of non-syndromic craniosynostosis and occurs when one of the lambdoid sutures at the back of the head fuses before birth."

Mellencamp Arroyave first learned that something was amiss at Dove's 2-month checkup, where her pediatrician said she might have torticollis, which the Bravo star and husband Edwin Arroyave's son Cruz, now 5½, had. (The two also share daughter Slate, 7½.)

The doctor recommended, before moving on to using a helmet or DOC Band, physical therapy for Dove — which Mellencamp Arroyave, 39, started right afterward. But at the infant's follow-up appointment, "The doctor was like, 'Yeah, we're definitely leaning in the direction of needing the DOC Band. But before you go to those specialists, I want you to go to this neurosurgeon, just so he can have a look.' "

The mother of three took Dove to the neurosurgeon "immediately after" without her husband, as hospitals are restricting partners due to the ongoing coronavirus pandemic, and initially thought the appointment would be "mainly a routine check."

However, "Immediately, [the doctor] was like, 'Teddi, we have to take her and get a CT scan,' " she recalled. "And they walked me over. And getting a CT scan for a baby is already a 'thing,' because you have to put their head in this little space and they're nervous, and my mind is racing a mile a minute. And then I was waiting for the results and all of a sudden I had all this worry and panic."

"And then that night, they called and said that she has something called lambdoid craniosynostosis, and she's gonna need neurosurgery," Mellencamp Arroyave continued, tearing up. "So that's booked for July 30th, and it's two days in the NICU after the surgery and then it's four to five days in the hospital and there's just so many unknowns."

The star praised her husband as "such a fixer" and "a positive force," but also noted that when she came home after Dove's appointment — before learning her diagnosis and subsequent surgery plan — "I was like, 'I need you to just let me crumble for a second.' "

The next day, Arroyave was able to accompany his wife to the neurosurgeon for them to explain what would be going into the procedure. And that, Mellencamp Arroyave said, was when "it really hit home" for him.

"We both have our faith and we know that it's gonna be okay, but it's a struggle right now," she explained. "They're saying her face is gonna be really swollen after the surgery and she's not gonna know what happened. So it's definitely one of those trying times, where you're just one foot in front of the other."

Mellencamp Arroyave, who is the daughter of John Mellencamp, first shared the news of Dove's diagnosis and upcoming surgery last week, posting a photo of her baby girl alongside the news.

Aside from revealing that she was "dealing with anxiety" surrounding her daughter's health news and "filled with nerves," she also said her family is "so grateful to have an amazing team of doctors and surgeons who have caught this early and will be working on her" and that the procedure has "a very high success rate."

"Please keep baby Dove in your prayers and if you have had a child with this same surgery, please let me know below, as I would love any additional insight and support," she wrote. "Sending 💕 to you all."

On her podcast Monday, Mellencamp Arroyave opened up about how her older children were handling their baby sister's condition, saying, "The biggest thing that they understand is Mommy's leaving [and] gonna be gone for six days with Dove, and that's something that's gonna be hard for them, as well."

"In one way, it's great that Edwin will be home with them, but in another way it's gonna be hard that he can't be in the hospital with me," she continued. "And all I wanna do is make sure that I'm in the best possible mind space for [Dove] by then. There's those highs and lows of anxiety and feeling [like] I just want to protect her and make sure she's gonna feel safe and good. I definitely have a heavy heart."