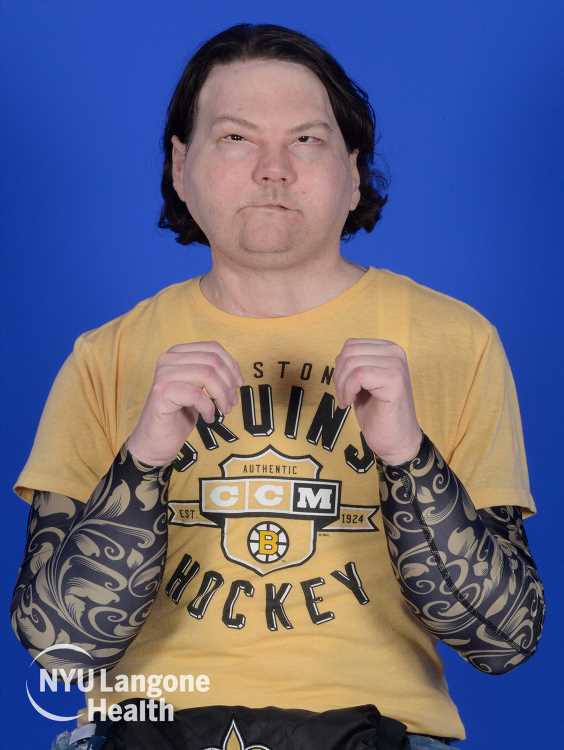 Joe DiMeo tends to "roll with the punches." The 22-year-old always looks for the positives, even when faced with extreme adversities, like a July 2018 car accident that left him with burns on 80% of his body.

The New Jersey native had been driving home after a late shift at work when he fell asleep at the wheel and crashed his car, which flipped and caught on fire. He was pulled halfway out of his car by a good Samaritan — who happened to be R&B singer Ted Wizard Mills, lead singer of Blue Magic — and woke up in the hospital nearly three months later after around 20 reconstructive surgeries.

DiMeo had survived, but with significant losses — doctors had to amputate his fingers due to the severe burns, he had no lips and his eyelids were completely fused. "They did what they could at the best of their ability for me," DiMeo tells PEOPLE. Once back at home, "I used to just lay on the couch because I wasn't able to do anything at all," he says. "I would just sit on the couch and watch TV and play with my dogs, and try to be as active as I could."

Still, DiMeo was always looking for the positives. Before he left the hospital, one of the plastic surgeons who worked on him had taken a video and sent it to Dr. Eduardo Rodriguez, a world renowned expert in reconstructive plastic surgery at NYU Langone Hospital in New York City. In March 2019, DiMeo spoke with Rodriguez, who brought up the possibility of a face and hands transplant.

"I liked his attitude — he's a really down-to-earth guy," DiMeo says of Rodriguez. "When I finished talking to him that day, I was like, 'I've got to do this.' " There were major risks, though. While there have been around 50 face transplants in the world (including two done by Rodriguez) and about 100 hand transplants, they had never successfully been done at the same time. Transplant surgery can easily go awry with infections or vascular failure after reconnecting the blood vessels, or the patient's body could reject the transplant after the surgery.

"When we talked about the possibility of doing both the hands and the face, I had to let him know that this has been attempted twice in the world and both have failed, and actually one of those patients died," Rodriguez tells PEOPLE. "He understood the risks that were involved, and he knew that this was a cutting-edge surgery that hadn't been successful in the past, but he had the greatest faith in all of us."

With the challenges — and the possibility that DiMeo could regain his independence — in mind, the next step was finding a donor. Because of the many blood transfusions DiMeo had received during his post-accident hospital stay, there was just a 6% chance of identifying a donor that would work.

Over the next year, DiMeo waited patiently as Rodriguez searched for a viable donor and worked with his team to train for the surgery. The process grew more complicated when the COVID-19 pandemic hit — DiMeo is at an extremely high risk of severe illness if he were to get the virus, and Rodriguez and his team were pulled to the frontline when New York City became the COVID-19 epicenter in early 2020. But on Aug. 10, Rodriguez found a possible donor.

"It was exhilarating. I had to ensure that this patient is the ideal donor for Joe, but with every step I go through, you start feeling better. And when I identified that this is the perfect donor for Joe, it was really exciting because now our entire team, that trained for close to a year, is ready to provide Joe with a chance to get his life back to normal," he says.

Just two days later, DiMeo was at the hospital, ready for the transplant, without any fears in his mind.

"I was clear headed that morning. It was like, 5:30 a.m., and Dr. Rodriguez came up to ask if was worried or wanted to back out, and I actually said, 'Let's do it now.' And he said, 'Well, we have to wait for the other doctors.' "

But they soon got going, connecting two bones, 21 tendons, five veins, two major arteries and three major nerves to transplant the donor's hands and face on to DiMeo. The surgery took just 23 hours, a "historically" fast time says Rodriguez, whose past face transplants alone were 24 to 25 hours. It was "smooth sailing," he says, with just one issue that they were able to easily fix. After the landmark surgery, the first-ever successful face and hands transplant in the world, Rodriguez felt "elation."

"When we completed this operation and I looked at Joe with a new face and two arms and they look perfect, I was so proud of this team that came together, and even more so through this great health crisis that none of us have ever experienced, and we pulled it off."

DiMeo woke up a few days later, and soon started rehab to help him regain the strength in his hands. "I do a lot of fine motor stuff with pinching and squeezing and trying to get the smaller muscles to work. It's a little bit trickier because I know I can do that stuff, but I just have to find the right muscle to do it."

But DiMeo is determined, and now five months post-transplant with hours of physical therapy under his belt, he's "way ahead" of schedule. "Right now I have 20 lbs. of grip, and most people don't have that in five months, that usually takes a year. And I'm getting a lot of sensation and grip back."

Rodriguez is watching him carefully for any issues or rejections, but "every week" gets better. DiMeo can now feed himself, shower, wash his hands, play pool — all things he couldn't do before his transplant surgery. "I feel really grateful," DiMeo says. "I can feel the fur of my dog, or when he licks his palm, and it makes me happy. It's the small things you do every day, and you don't know it's gone until you lost it." Rodriguez says the surgery would not have been as successful if not for a patient like DiMeo.

"This is an individual with tremendous amount of courage, who went into an operation not knowing if he's going to come out of alive," Rodriguez says. "He just has that mentality and hope and a mental strength that he will succeed. And that is a major element that has helped him heal and help him get back to normal."

To DiMeo, that's just his personality.

"I just kind of roll with the punches and keep looking forward," he says. "You can always look on the downside of things, but there's always more good things than bad things."