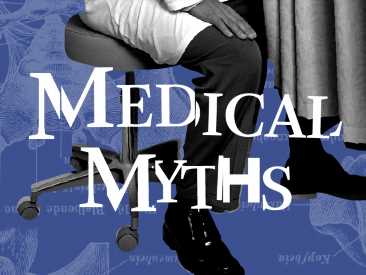 This edition of Medical Myths will mark Arthritis Awareness Month by focusing on some of the most long lived half-truths and untruths associated with arthritis. We tackle prevention, supplements, the effects of weather, and more.

Arthritis is a condition that results in pain and inflammation in joints. There are two main types: osteoarthritis (OA) and rheumatoid arthritis (RA).

OA — the form of arthritis — occurs when the cartilage that sits between the bones in a joint wears down. People sometimes refer to the condition as “wear and tear” arthritis.

Arthritis is not an uncommon condition. OA is a leading cause of disability in older adults, affecting an estimated of the global population, which equates to more than 500 million people.

According to the , RA is less common but still affects an estimated 0.3–1% of the world’s population. It also tends to appear earlier in life than OA — typically between the ages of 20 and 40 years — and it can severely affect day-to-day activities. The WHO notes, “Within 10 years of onset, at least 50% of patients in developed countries are unable to hold down a full time job.”

Aside from OA and RA, there are several other forms of arthritis, including:

As May is , this edition of Medical Myths will tackle some of the misconceptions that surround arthritis.

Arthritis is more common in older adults, but it can affect people of any age. One , which took data from the in the United States, found that doctors have diagnosed arthritis in 49.7% of adults aged 65 years or older.

2. If your joints hurt, it is arthritis

This is not true. Not all joint pain is arthritis, and not all joint discomfort is a sign that arthritis will develop later. There are many possible causes of pain in and around the joints, including tendinitis, bursitis, and injuries.

3. People with arthritis should not exercise

Exercise is not generally an activity that people with arthritis need to avoid, although they should speak with their doctor before beginning a regimen. Exercise can help maintain range of motion and strength in the joints.

According to the American College of Rheumatology:

“Exercise and arthritis can and should coexist. People with arthritis who exercise regularly have less pain, more energy, improved sleep, and better day-to-day function.”

The organization also suggests that “exercise should be one of the mainstays of treatment for OA of the hip and knee.”

Nightshade vegetables, which include tomatoes, eggplant, potatoes, and peppers, are embroiled in a long standing arthritis myth. Some people claim that these foods increase arthritis symptoms.

“There is no evidence that nightshade vegetables induce inflammation or worsen arthritis symptoms. However, the Arthritis Foundation does recommend certain anti-inflammatory foods, including oily fish that are rich in omega-3, colorful fruits and vegetables rich in antioxidants, nuts and seeds, and beans.”

5. Heat is better than ice for sore joints

This is not true. In fact, both ice and heat can soothe sore joints. According to Guy’s and St Thomas’s National Health Service (NHS) Foundation Trust in the United Kingdom:

The Trust explains that people should use heat before exercise, when a joint is stiff, and when they experience pain. Cold can also relieve pain, and it might also be useful if the joint is inflamed, particularly if there is swelling after activity.

6. Arthritis is not preventable

This is a partial myth. It is not possible to prevent every case of arthritis, as some risk factors, such as advancing age, are not modifiable. However, people can eliminate or minimize certain to prevent the onset of arthritis or slow its progression.

For instance, people with excess body weight have an increased risk of developing knee OA. Maintaining a moderate weight can lower arthritis risk.

Smoking tobacco is also associated with an increased risk of developing RA. Quitting smoking will reduce the risk and bring a range of other health benefits.

Also, as arthritis can develop following injuries, protecting the joints during sports or other physical activity can help reduce the risk of developing arthritis in later life.

7. After receiving a diagnosis, there is nothing you can do

Thankfully, this is a myth. Although there is often no cure for the disease, its course varies depending on the type of arthritis. Medications are available that can help reduce the symptoms of many types of arthritis and slow disease progression.

People can also adopt certain lifestyle measures to slow the progression of some types of arthritis, such as maintaining a moderate weight, quitting smoking, eating a healthy diet, and getting enough sleep.

8. Glucosamine and chondroitin can cure arthritis

Generally, there is no cure for arthritis. However, glucosamine and chondroitin supplements may help relieve symptoms for some people with OA.

Both glucosamine and chondroitin are structural components of cartilage. They are widely available in supplement form.

MNT spoke with Dr. Orrin Troum, a rheumatologist at Providence Saint John’s Health Center in Santa Monica, CA, who explained why the myth might have arisen:

“Despite the publication of the book by Dr. Jason Theodosakis — The Arthritis Cure — which suggested that glucosamine and chondroitin sulfate could cure arthritis, those claims remain unsubstantiated.”

Researchers have conducted a number of studies investigating both compounds in isolation and in combination, but the results are not clear cut. As an example, a large National Institutes of Health (NIH) from 2008 set out to investigate whether glucosamine and chondroitin are effective against knee OA pain.

The researchers studied the effects of glucosamine and chondroitin separately and together, comparing them with a placebo. They also trialed celecoxib — a prescription drug that doctors use to manage OA pain.

Although celecoxib did reduce pain compared with the placebo, the authors concluded that “there were no significant differences between the other treatments tested and placebo.”

However, they noted that for a “subset of participants with moderate-to-severe pain, glucosamine combined with chondroitin sulfate provided statistically significant pain relief compared with placebo.” They pointed out that this subset was too small to draw significant conclusions, though.

According to the National Center for Complementary and Integrative Health:

“Research results suggest that chondroitin isn’t helpful for pain from OA of the knee or hip. […] It’s unclear whether glucosamine helps with OA knee pain or whether either supplement lessens OA pain in other joints.”

Dr. Troum concluded: “There does appear to be a pain-modulating effect of either glucosamine or chondroitin or when used in combination for some patients that have pain from OA. Since these supplements appear to lack significant side effects, a trial of them may be appropriate for patients seeking pain relief without using traditional prescription medications, such as nonsteroidal anti-inflammatory medications or acetaminophen.”

Dr. Schulz agreed, telling MNT that although some studies show benefits while others do not, “these supplements are relatively safe to take, so I usually recommend having patients try them to see if it works for them.”

There is a persistent claim that rain and damp weather make arthritis symptoms worse. We will end on this topic because although it sounds as though it should be a myth, there does seem to be some evidence that weather can influence arthritis symptoms. However, it is not conclusive, and the weather does not seem to affect everyone with arthritis.

MNT spoke with Dr. John Tiberi, an orthopedic surgeon who specializes in joint replacement and joint preservation at Cedars-Sinai Kerlan-Jobe Institute. He told us:

“There is not a concrete, conclusive scientific explanation for the effect of weather on the symptoms of arthritis. There are several theories, however, and, anecdotally, patients frequently tell physicians that their symptoms do, in fact, vary with changes in the weather.”

Dr. Troum echoed this message, saying, “Many of my patients can tell when it’s going to rain or when the weather is going to change. I find them, at times, more reliable than the weather report! Patients with inflammatory arthritis or swollen joints frequently can feel the change in barometric pressure, typically the day before the weather changes.”

The exact relationship between weather and arthritis symptoms is not understood, but it does seem to exist to some degree. Aside from detecting barometric changes, Dr. Schulz outlined the theory “that low temperatures affect the viscosity of the joint fluid, which can also make the joint feel stiffer.”

As this final “myth” demonstrates, despite the prevalence of arthritis, we still have much to learn about it. However, we do know that by maintaining a lifestyle that includes exercise and a nutritious, balanced diet, we can reduce the risk of some types of arthritis and slow their progression.

As scientists continue to investigate these conditions, better treatments are sure to arise. Maybe, if the stars align, we will one day understand why the weather affects arthritis symptoms, too.