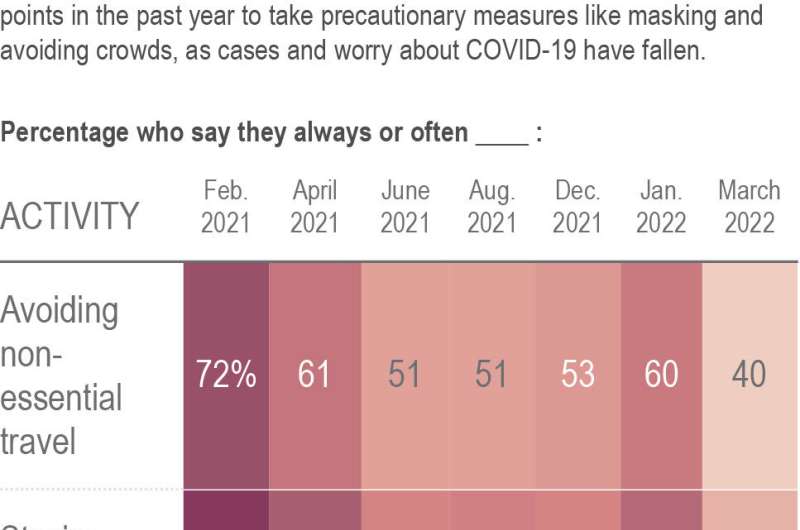 Many Americans have taken significant steps back from once-routine coronavirus precautions, with less than half now saying they regularly wear face masks, avoid crowds and skip nonessential travel.

Americans are letting down their guard even as experts warn a new wave of COVID-19 cases is coming. A new poll from The Associated Press-NORC Center for Public Affairs Research shows fewer people taking protective measures than at any point in AP-NORC polls conducted since early 2021.

Most Americans say they at least sometimes still follow those safeguards. But they’re increasingly returning to pre-pandemic norms as coronavirus infections have fallen to their lowest level since July.

The federal Centers for Disease Control and Prevention no longer recommends masking indoors for most Americans, while cities are lifting mask and vaccine requirements to enter restaurants, bars and concert venues. And more U.S. workers are returning to offices after two years of doing their jobs at home.

Judy Morgan, a retired teacher from Poulsbo, Washington, said she and her husband, a Navy veteran, have gradually become more relaxed about wearing masks and other precautions since getting their vaccine booster shots in late October. Roughly six weeks ago, she went back to shopping without a mask when the Navy base where she buys groceries stopped requiring face coverings.

“I figured when the military starts easing up, because they’re pretty strict, that’s a very good sign,” said Morgan, 80.

Morgan and her husband plan to put their masks back on at the airport later this week when they fly to Florida to celebrate her birthday. She said they were extra cautious earlier in the pandemic because her husband has a heart condition that makes him more susceptible to severe illness from COVID-19—and she’s ready to go back to that behavior if another severe wave of infections hits.

“My hope is that it’s tapering off and every variation will be somewhat less viral or significant,” Morgan said. “But my fear is something new will happen.”

Experts say the coronavirus isn’t going away, and most Americans recognize the virus will stick around. In January, an AP-NORC poll showed just 15% of Americans said the pandemic will be over when COVID-19 is mostly eliminated. Most said they expect the pandemic to end when it’s largely a mild virus. 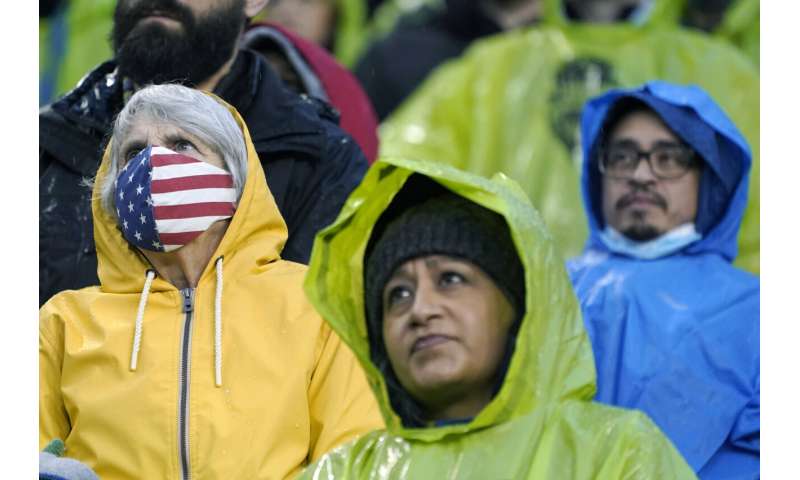 But that might not be the case just yet. Experts still say new variants could soon start another wave of rising infections in the U.S. Scientists are closely watching an extra-contagious spinoff of omicron that already has case numbers climbing in parts of Europe and Asia, as well as a delta-omicron hybrid, though so far infections of that variant appear to be rare.

Sonia Montoya, of Albuquerque, New Mexico, isn’t taking any chances. The 65-year-old bookkeeper still works remotely from her office colleagues, orders any restaurant meals to go and makes sure to wear a mask when shopping or attending church. Six of Montoya’s relatives and friends died from the virus, and she said she’s still very worried about getting sick even though she’s vaccinated.

“It came back and hit us again once before, and I have a feeling if we aren’t cautious we are going to do it again,” Montoya said. “Yes, it’s slowing down, but there’s a lot of stupid people out there, especially the younger ones that don’t think it’s serious.”

Since vaccines became widely available to the American public, AP-NORC polls have consistently shown that vaccinated people are more worried about infections and more likely to take preventive steps than the unvaccinated. The vaccinated are still more likely than the unvaccinated to say they’re always or often avoiding nonessential travel (44% to 29%), staying away from large groups (51% to 32%) and wearing face masks around other people (49% to 26%).

But the new poll shows that over the past two months the vaccinated and unvaccinated alike have become less likely to regularly take those precautions. Likewise, both Democrats and Republicans are less likely than they were in January to say they frequently take protective measures.

Jason Newman, of Greenville, Kentucky, said he never wears a mask unless he’s required to, has no concerns about dining out and never got vaccinated. He said he’s tested positive for COVID-19 twice but suffered no symptoms either time.

The 43-year-old postal worker said in recent months he’s noticed more people who seem to be treating the virus the way he does.

“It’s always going be here no matter what, because they won’t be able to eradicate it,” Newman said. “I think, by and large, they’re all over it.”