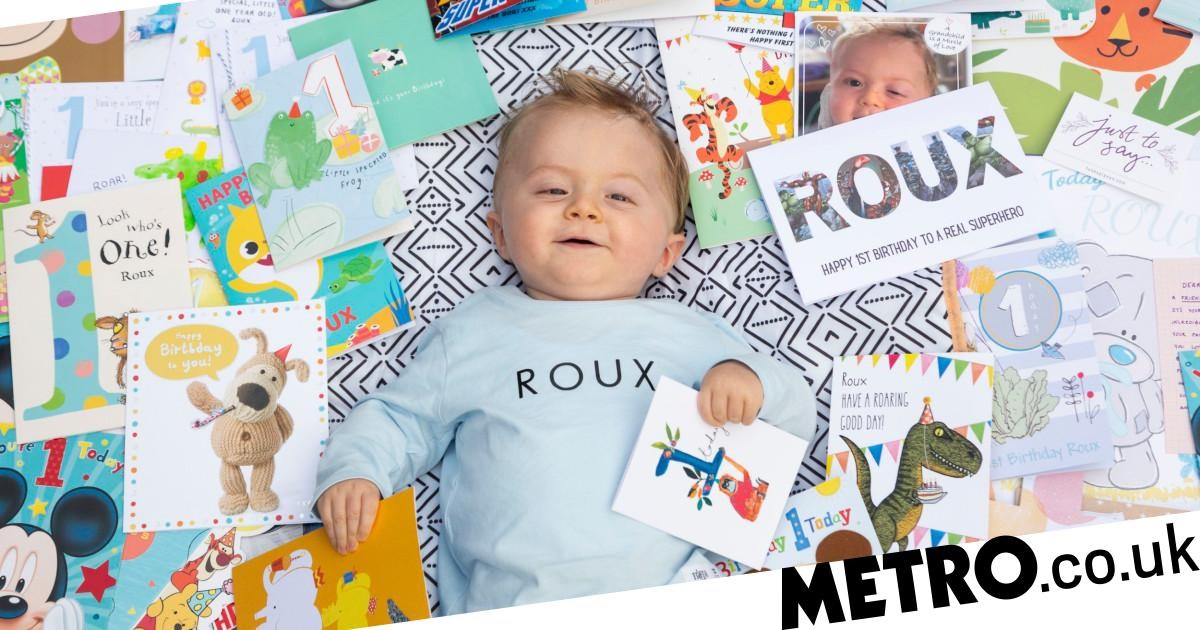 A baby who survived a giant brain tumour returned home from hospital to celebrate his first birthday surrounded by hundreds of birthday cards from around the world.

Roux Owen was discharged from hospital on his birthday after undergoing 10 operations in just 11 months to remove a tumour the size of two oranges.

His parents Antony and Amy, 32, from Hull, had expected him to spend the day in hospital so asked well-wishers to post birthday cards to the ward.

But on his birthday, they were told by doctors that he was being discharged and he could return home.

A global army of well-wishers sent cards to the ward where Roux had spent almost half of his life since being diagnosed with an immature teratoma, a benign tumour that continues to grow.

Dad Antony, an English teacher, said: ‘We were overwhelmed with the number of cards we received.

‘We’ve had hundreds from all around the world, as far away as Nigeria.

‘He has touched so many people.

‘It seems strange but the love and support we have had from people means we’ve never felt alone during all this.’

Roux was diagnosed with a brain tumour in November last year when he was just four weeks old after his parents became concerned that he was not feeding properly.

After eight major operations, the tumour was finally removed last month and he was sent home.

But Roux was rushed back to hospital last week after a shunt inserted in his head to remove excess fluid to reduce brain swelling, became infected and blocked.

He needed another two operations to repair the shunt and drain fluid from his brain.

The tumour has left Roux without sight in his left eye and doctors believe he is a few months behind in his development.

But his happy personality has inspired his parents to hope that he will catch up.

Anthony continued: ‘They said they can’t say for sure if there is anything he won’t be able to do until it comes to that point in his development.

‘He is such a happy, settled boy and he is doing things and hitting his milestones, just a bit later than he normally would have.’

And they are now hoping to make up for lost time and enjoy family life together with Roux and their other son Noah.

Antony added: ‘The last year has just been as hard for Noah, I can’t imagine what it has felt like for him.

‘We can’t wait to do all the normal, boring family things together that we haven’t been able to do for the last year.’

The family has raised more than £30,000 for Leeds Cares, a charity that supports Ward 52, where Roux was treated during his stay in hospital.

Schoolteacher Amy added: ‘Day in, day out, they worked flat out to ensure Roux received the best possible care.

‘Words will never be enough to express how much they mean to our family.

‘They’ve provided us with a future for our little boy that at one point we didn’t think we would have.

‘It will always hold a very precious place in our hearts.’

You can donate to the Owens’ fundraising page via the JustGiving website.

Do you have a story you want to share?