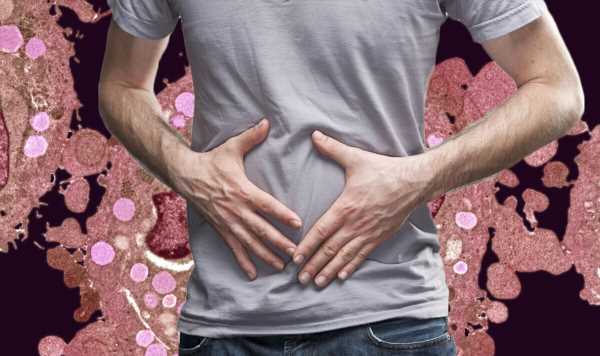 Fortunately, bowel cancer boasts survival rates of 91 percent when diagnosed at the localised stage. Once the disease advances, however, it becomes increasingly hard to contain. A sign that a tumour is growing inside the bowel, may include four types of abdominal pain, according to health bodies.

Nearly 43,000 people are diagnosed with bowel cancer in the UK each year, making it the fourth most common cancer in the country.

The majority of cases depart from the formation of a polyp inside the colon – where cells have regrouped inside the lining of the passageway.

Although these pre-cancerous growths are mostly benign, some go on to become cancerous.

This occurs when the cells acquire the ability to grow in an uncontrolled way, forming tumours that invade neighbouring tissue.

Catching the disease early is critical for survival, so changes in the body’s normal functions should never be ignored.

Patients often complain of changes in their bowel movements first, and this is often accompanied by pain in the abdominal region.

In early research published in the American Journal of Gastroenterology, researchers assessed the frequency of different bowel cancer symptoms in a sample of 194 patients with colorectal cancer.

The researchers wrote: “The most common symptoms were rectal bleeding (58 percent), abdominal pain (52 percent), and changes in bowel habits (51 percent); the majority had anaemia (57 percent) and occult bleeding (77 percent).”

The study found no overall association between the duration of the symptoms and the stage of the tumour.

Sometimes, patients with abdominal pain also complain that it radiates to the lower back, which is also a symptom of stomach and rectum cancer.

Often, this discomfort becomes more pronounced after eating, when food travels through the bowel.

Alternatively, patients sometimes report a lack of appetite which may eventually lead to weight loss.

According to the health platform Prime Health Denver, colon cancer may also make the body gurgle.

The health body continues: “If your stomach growling is accompanied by the following symptoms (blood in stool, excess gas, nausea, diarrhoea, heartburn, unintended weight loss), you should go to the doctor right away.”

There is no surefire way to avoid cancer, but preventive measures can help lower your odds.

Keeping the waistline trim is important, and this can be done with the help of a healthful diet and exercise routine.

Diets that include vegetables, fruits and whole grains have been linked with lower rates of cancer because they contain natural substances such as antioxidants.

These molecules have cancer-protective effects which confer protection against mouth, throat, and stomach cancer too.

Scientists also know that a diet comprising a lot of red and processed meat is directly associated with the development of the disease, so these foods should be avoided.