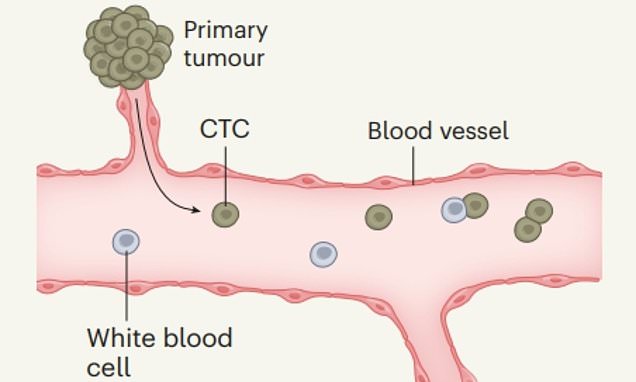 Cancer may find it easiest to spread around the body when patients are sleeping, research suggests.

Tumours are deadliest if they have metastasised, when malignant cells break away from where they first formed to create another mass.

Until now, scientists had assumed the killer process — which often renders cancers incurable — occurred continuously throughout the day.

But new evidence shows it mainly occurs during the night. Swiss academics believe tumours ‘awaken’ when patients are asleep.

Heightened levels of melatonin, the same hormone which determines our sleeping patterns, are thought to be to blame.

Experts believe the findings, specifically on breast cancer, could be true across other tumour types.

It could mean doctors are better able to diagnose patients and even treat them if they take samples at night.

Some 56,000 more women are diagnosed with breast cancer every year in the UK, with almost 290,000 new cases found in the US annually.

Around 90 per cent of women survive at least five years if the disease hasn’t spread around the body. But survival rates plummet to just 29 per cent for women whose cancer has mestastasised.

Tumours are deadliest if they have metastasised, when malignant cells break away from where they first formed to create another mass. Graph shows: More cells break off tumours while asleep (right) to form another mass than when people are awake (left)

The new study, led by experts at ETH Zurich, was published in the leading scientific journal Nature.

Researchers sought to investigate how levels of circulating tumour cells — the ones responsible for metastasis — differ through the day.

First, they took blood samples from 30 women with breast cancer at 4am and 10am.

They found there were nearly four times as many cells in samples from 4am — when participants would have been asleep — as at 10am.

A higher prevalence of the cells doesn’t necessarily lead to a greater chance of the cancer spreading around the body, however. Most breakaways die in the blood. Only a handful manage to settle elsewhere in the body.

Professor Nicola Aceto and colleagues then looked at how the cells affected mice to see if those taken at night were more likely to cause tumours.

Healthy mice were then given injections of both types of cell, to see if they provoked cancer in their bodies.

Samples taken from sleeping mice were significantly more likely to result in a tumour in healthy mice, results showed.

Researchers said the results suggested medics should try taking blood samples at night or in the early morning to better spot when a tumour start to mestastasise.

Professor Aceto, a molecular oncologist, said: ‘When the affected person is asleep, the tumour awakens.

‘In our view, these findings may indicate the need for healthcare professionals to systematically record the time at which they perform biopsies.

‘It may help to make the data truly comparable.’

Independent experts also claimed the research suggests current treatments aimed at destroying cancer cells, like chemotherapy, could be more effective at night or in the early morning.

Writing in the same journal, Professor Sunitha Nagrath, a chemical engineer at the University of Michigan, said: ‘The time-dependent nature of [circulating tumour cells] dynamics might transform how doctors assess and treat patients.

‘The data pointing to [circulating tumour cells] proliferation and release during the rest phase suggest that doctors might need to become more conscious of when to administer specific treatments.’

What is breast cancer?

Breast cancer develops from a cancerous cell which develops in the lining of a duct or lobule in one of the breasts.

When the breast cancer has spread into surrounding breast tissue it is called an ‘invasive’ breast cancer. Some people are diagnosed with ‘carcinoma in situ’, where no cancer cells have grown beyond the duct or lobule.

Most cases develop in women over the age of 50 but younger women are sometimes affected. Breast cancer can develop in men though this is rare.

Staging means how big the cancer is and whether it has spread. Stage 1 is the earliest stage and stage 4 means the cancer has spread to another part of the body.

The cancerous cells are graded from low, which means a slow growth, to high, which is fast growing. High grade cancers are more likely to come back after they have first been treated.

A cancerous tumour starts from one abnormal cell. The exact reason why a cell becomes cancerous is unclear. It is thought that something damages or alters certain genes in the cell. This makes the cell abnormal and multiply ‘out of control’.

Although breast cancer can develop for no apparent reason, there are some risk factors that can increase the chance of developing breast cancer, such as genetics.

What are the symptoms of breast cancer?

The usual first symptom is a painless lump in the breast, although most breast lumps are not cancerous and are fluid filled cysts, which are benign.

The first place that breast cancer usually spreads to is the lymph nodes in the armpit. If this occurs you will develop a swelling or lump in an armpit.

How is breast cancer diagnosed?

If you are confirmed to have breast cancer, further tests may be needed to assess if it has spread. For example, blood tests, an ultrasound scan of the liver or a chest x-ray.

How is breast cancer treated?

Treatment options which may be considered include surgery, chemotherapy, radiotherapy and hormone treatment. Often a combination of two or more of these treatments are used.

How successful is treatment?

The outlook is best in those who are diagnosed when the cancer is still small, and has not spread. Surgical removal of a tumour in an early stage may then give a good chance of cure.

The routine mammography offered to women between the ages of 50 and 70 mean more breast cancers are being diagnosed and treated at an early stage.