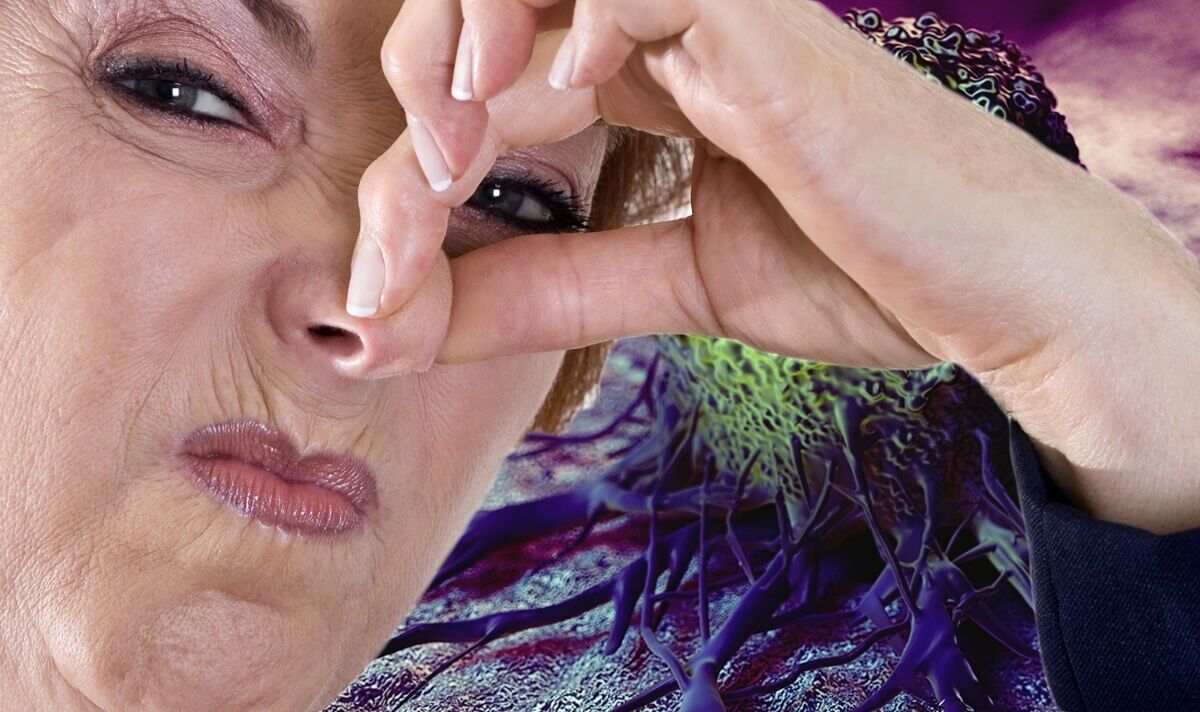 Cancer symptoms: Top 14 early signs to look out for

The presentations of cancer are multifaceted and extensive, making diagnosis difficult in some cases. Generally, however, symptoms tend to reflect the tumour’s point of origin. When these warning signs manifest physically, they may produce a smell. This is particularly true of tumours that break through the skin’s surface, leaving dead tissue in their wake.

When tumours ulcerate, they can let off a smell that is widely described as unpleasant and strong.

MacMillan explains: “An ulcerating cancer wound is when cancer that is growing under the skin breaks through the skin and creates a wound.”

These wounds, sometimes medically referred to as “fumigating” wounds, are the result of a tumour damaging the blood vessels.

Tumours are able to block and damage small the vascular system, causing oxygen circulation to hinder.

Unless treated swiftly, this can lead to the necrotising – or death – of tissue, leaving a wound that may become infected and ulcerated.

Although these types of complications are rarely seen in cancer patients, they are possible with several types of cancer.

In fact, ulcerating cancer can develop in the part of the body where the tumour has started, or where it has spread to.

Ulceration, however, is more likely to happen in cancers that originate in the breast, head and neck, or melanoma.

This is partly due to the fact that these cancers develop close to or on the skin.

If the wound presses against nerves, this can cause pain at the site of the ulcer, or elsewhere in the body.

As an ulcer protrudes from the skin, leakage or discharge may be apparent at the site of the wound.

According to Cancer Research UK, this may let off a “strong” and “unpleasant” smell.

Blood seeping from the wound isn’t uncommon either, and this may cause itching in some cases.

Other smelly signs of cancer

Smelly signs are commonplace with cancer, but not all symptoms are associated with issues relating to the epidermis.

Occasionally, the disease triggers a set of different biochemical processes in the body, which can lead to the production of various volatile molecules.

Doctor Yehuda Zeiri, a Biomedical engineer at Ben-Gurion University’s Kiryat Bergman Campus in Be’er-Sheva, Israel, said: “According to the scientific literature there is evidence that the scent may contain markers for lung cancer, breast cancer, diabetes, melanoma and more.”

Other research states that polyamides may be responsible for the scent of certain cancers.

These molecules are linked to the growth, proliferation and differentiation of cancer cells.

They can be transported to the lung, released in exhaled breath, or may be released in urine and sweat.

Although high polyamide levels give off a distinct odour, experts claim it cannot be picked up by the human nose.