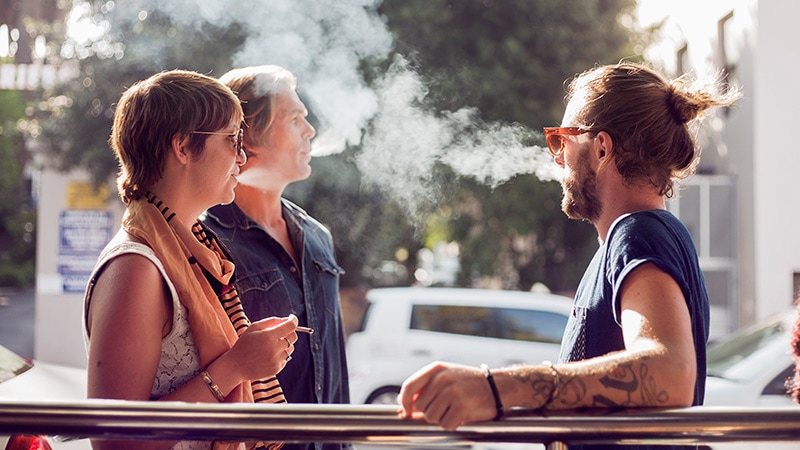 Regular smokers in Denmark purchased fewer cigarettes during the initial phase of the COVID-19 pandemic than they had previously, according to research published earlier this month in Communications Medicine.

“We think of this as a potential bright spot from the pandemic,” said Sally Sadoff, PhD, an economist at the University of California, San Diego, who led the study. Pandemic-era declines in smoking among the most frequent smokers should result in long-term improvements in health, she said.

Sadoff said researchers and clinicians worried that the added stress from living through a pandemic would cause an increase in smoking. That did occur for social smokers. But for regular smokers, who face greater health risks from COVID-19 and in general, the opposite was true.

Other countries saw increases in smoking during the pandemic, so the new findings are encouraging, said Hilary Tindle, MD, MPH, founding director of the Vanderbilt Center for Tobacco, Addiction and Lifestyle at Vanderbilt University Medical Center, Nashville, Tennessee.

“Everybody else was in the opposite direction, so this is awesome,” Tindle, who was not involved in the latest work, said. She co-authored a 2021 study that showed that some smokers in the United States smoked more during the pandemic even if they were aware of COVID-19’s risks for smokers.

Tracking With an App

Sadoff and her colleagues analyzed data on cigarette purchases by more than 4000 Danish people in 2019 (before the pandemic) and 2020 (during the pandemic). The data came from smartphone apps that anonymously track purchases at Danish grocery stores. The data allowed the researchers to explore shifts in individual purchase patterns. They were unable to identify by name who purchased cigarettes.

If a shopper had purchased an average of at least one cigarette per day in 2019, researchers considered that person to be a regular smoker. Anyone with a lower average was an occasional smoker, and anyone who did not purchase cigarettes at all was a nonsmoker. By these standards, prior to the pandemic, 76% of the sample were nonsmokers, 16% were occasional smokers, and 8% were regular smokers, according to the researchers.

Sadoff and her colleagues estimate that in 2020 ― the first pandemic year ― regular smokers bought cigarettes 30% less often than they had in 2019 and purchased 20% fewer cigarettes whenever they did add cigarettes to their grocery cart. Occasional smokers, on the other hand, bought cigarettes at the same rate as before and tended to buy modestly more cigarettes after the pandemic began. People who were nonsmokers before the pandemic stayed that way.

“Our story demonstrates the importance of purchase data that track people at the individual level prior to and through the pandemic,” Sadoff said, noting that other studies of smoking behavior during the pandemic rely on self-reports, which may be less reliable.

The Danish study has limitations. It tracked only cigarette purchases at grocery stores, not at convenience stores, so some purchases likely were missed. On the other hand, Sadoff said, cigarette cartons bought at a grocery store are intended for household rather than individual use, which may overestimate how many cigarettes people bought for themselves.

The researchers also compared how often regular smokers quit smoking altogether in 2019 and 2020 by identifying people who bought cigarettes in the first 10 weeks of either year but never bought them again during the rest of that year. Some people continued to purchase after that 10th week but eventually stopped; by halfway through 2020, 10% more regular smokers had stopped smoking than had done so before the pandemic.

“The sustained decline in purchases and quitting suggests these behaviors could persist long term, which could lead to long-term improvements in health,” Sadoff said.

Sadoff and colleagues were unable to study how many people may have switched from traditional cigarettes to alternatives, such as e-cigarettes, because their dataset doesn’t include that information. Tindle noted that, although it is always best to not smoke at all, a switch to e-cigarettes could still be beneficial.

Sadoff and Tindle have disclosed no relevant financial relationships.

Marcus A. Banks, MA, is a journalist based in New York City who covers health news with a focus on new cancer research. His work appears in Medscape, Cancer Today, The Scientist, Gastroenterology & Endoscopy News, Slate, TCTMD, and Spectrum.