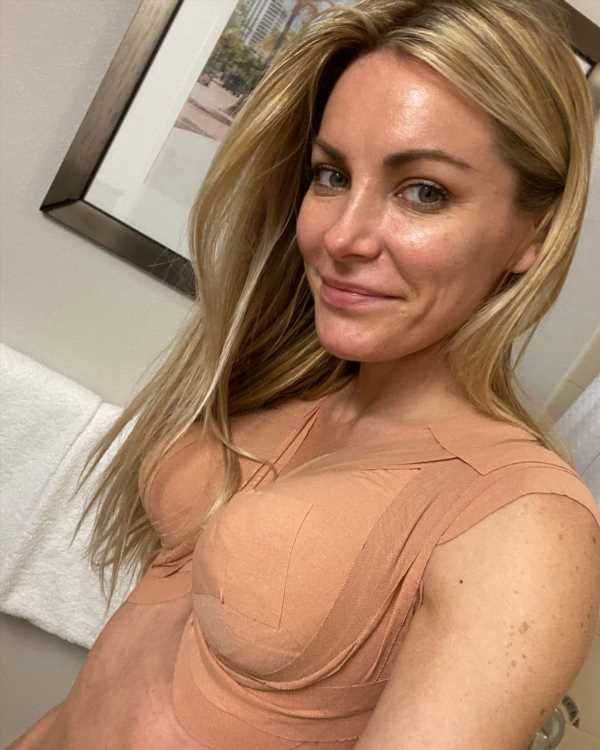 Crystal Hefner is opening up about a harrowing cosmetic procedure that she "almost didn't make it through."

The former Playmate and widow of Playboy founder Hugh Hefner, 34, revealed on Wednesday that she almost died last year while undergoing a "fat transfer surgery."

Alongside a photo of herself wrapped in support bandages, she wrote on her Instagram, "I had a fat transfer surgery October 16 and almost didn’t make it through."

"I lost half the blood in my body and ended up in the hospital needing a blood transfusion," Hefner shared. "I've been slowly eating my way back to health since then and I am now finally feeling ok.⁣"

A fat transfer procedure involves fat being removed from one area in the body and grafted to another area, fat cells are often injected into a woman's breasts to increase their size or change shape.

⁣"I advocate for being natural since I got very ill and removed my implants and everything else toxic in my body in 2016," she continued. "I should have learned my lesson the first time but I guess the universe keeps sending you the same lesson until you learn it." In her post, the model and DJ called out unrealistic beauty standards, saying, "Our culture is a trap and makes women feel terrible about themselves."

"Social media makes it worse. Advertisements make it worse. Physically fake people make it worse (I was one of them)," she wrote. "How our culture defines beauty makes it impossible to keep up with. Women are overly sexualized. I know from the worst kind of experience."

"For ten years my value was based on how good my physical body looked. I was rewarded and made a living based on my outer appearance," Hefner said. "To this day I need to write reminders of why I’m worthy that have nothing to do with my physical appearance to convince myself that I’m enough."

The star went on to say she feels "sorry for the next generation looking up to people whose looks aren’t even attainable without lots of filters, makeup, or money and women need to stop feeding into it.⁣"

"This is a huge slap on my own wrist for caving in to this pressure, even now in my 30's – as I thought I would have learned my lesson by now," she remarked of her near-death experience.

In 2016, Crystal said that she removed her breast implants because they had "slowly poisoned" her and caused debilitating illnesses, which included "intolerance to foods and beverages, unexplained back pain, constant neck and shoulder pain, cognitive dysfunction (brain fog, memory loss), stunted hair growth, incapacitating fatigue, burning bladder pain, low immunity, recurring infections and problems with my thyroid and adrenals."

"I've had days in 2016 when I couldn't get out of bed. I’ve felt such despair knowing life was happening all around me but I couldn’t participate," she recalled in a Facebook post. "The fatigue was so severe that I could barely leave the house or drive. I was afraid to get up there in front of a crowd and go blank with brain fog."

After revealing that she had been diagnosed with Lyme disease earlier that year, Crystal said she began receiving comments from fans that claimed her symptoms "resembled 'Breast Implant Illness.' "

Explaining that both silicone and saline breast implants break down and chemicals in them can harm the body, Hefner said she "could breathe much better" after she underwent surgery to have "the toxic bags removed."

"My implants took 8 years to make me this sick, so I know it will take time to feel better," she wrote at the time. "Many of my friends have implants. I worry for their health and hope that they, and everyone, can benefit from what I have experienced."