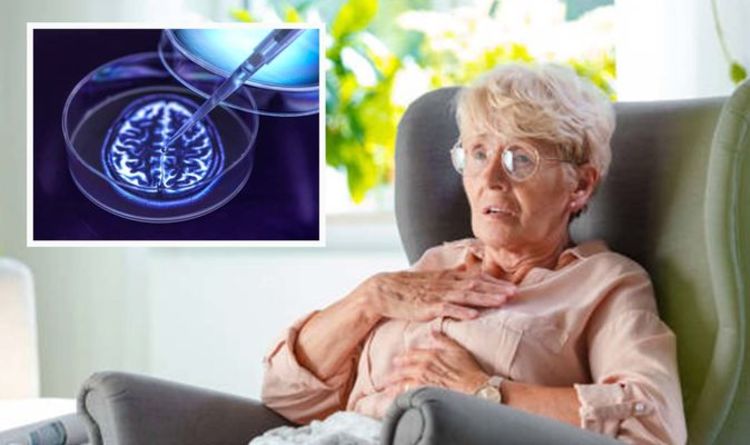 Dementia: Dr Sara on benefits of being in nature

Early diagnosis means its progression can be slowed down in some cases, so it is important to spot the signs early. Research shows there are more than 850,000 people in the UK who have dementia. The number of people with dementia is increasing. By 2025, Dementia UK reports more than one million people will be living with dementia in the UK.

Some signs may show up in a person’s mood. Indeed, Elaine Smith, Dementia Expert at Richmond Villages Willaston, said: “Changes in mood may also be a key early sign of dementia, as the individual may become more fearful or anxious when they find themselves in unfamiliar situations.”

The dementia expert added: “It can be difficult to identify the early signs of dementia as everyone’s symptoms are different and they may not be immediately obvious.

“Early symptoms also depend on the type of dementia that the individual may have.”

She suggested: “Start by closely monitoring and examining any changes in day-to-day behaviour, for example, if you see the individual experiencing difficulties in performing familiar tasks, struggling to follow a conversation, having problems concentrating and memory loss then it is worth speaking to a GP and getting their professional opinion.”

One in 14 people over the age of 65 have dementia, and the condition affects one in six people over 80.

There are many different types of dementia, with Alzheimer’s disease being one of the most common.

The NHS notes: “Early symptoms of frontotemporal dementia may include: personality changes – reduced sensitivity to others’ feelings, making people seem cold and unfeeling. lack of social awareness – making inappropriate jokes or showing a lack of tact, though some people may become very withdrawn and apathetic.”

The Alzheimer Society of Canada states: “Anyone can feel sad or moody from time to time. However, someone living with dementia can show varied mood swings – from calmness to tears to anger – for no apparent reason.”

The NHS says that dementia symptoms may also include problems with language, such as using words incorrectly, or trouble speaking, as well as movement and difficulties doing daily activities.

It explains: “The symptoms of dementia usually become worse over time. In the late stage of dementia, people will not be able to take care of themselves and may lose their ability to communicate.”

The NHS suggests that risk factors such as hearing loss, untreated depression, loneliness or social isolation, or sitting for most of the day, may also be important.

The Alzheimer’s Society notes that mid-life – from your 40s into your early 60s – is a good time to start taking steps to reduce your risk of developing dementia, though it is helpful to take steps at any age.

“The brain changes that cause dementia can start years or even decades before symptoms develop. If you live a healthy lifestyle now, you are reducing the chances that these brain changes will happen,” it adds.

The NHS Health Check can help find early signs and tell you if you’re at higher risk of certain health problems that can also increase your risk of dementia.

It is a free check-up of your overall health for people aged 40 to 74 who do not have heart disease, diabetes or kidney disease, and have not had a stroke, and is offered every five years.

As the NHS explains, a healthy lifestyle can also help prevent cardiovascular diseases, such as stroke and heart attacks, which are themselves risk factors for Alzheimer’s disease and vascular dementia.

If memory loss begins to affect daily life, it is recommended that you speak with your GP.

Early diagnosis means its progression can be slowed down in some cases, so it is important to spot the signs early.