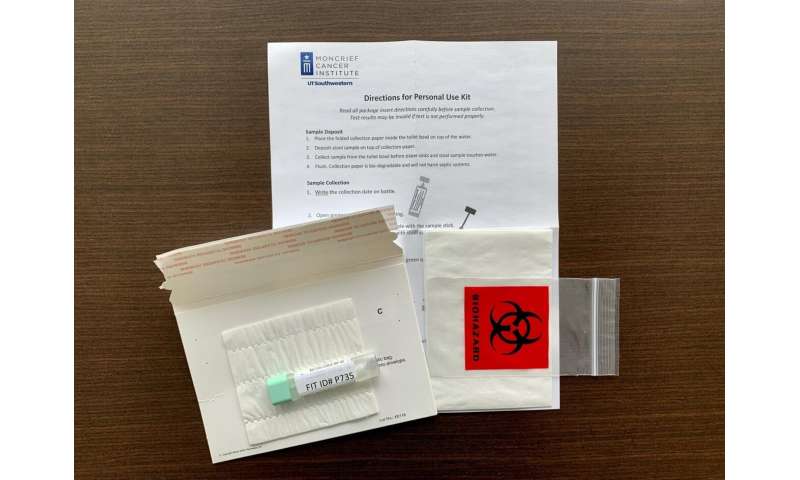 A program that asks patients to mail in stool samples to screen for colon cancer is an effective way to expand screenings to underserved and underinsured communities and offers an alternative to in-person testing during the pandemic, according to a study conducted by UT Southwestern.

In an article published recently in CA: A Cancer Journal for Clinicians, UT Southwestern physicians identified nine best practices for effective mail-in screening campaigns, which can take the place of invasive, unpopular colonoscopies.

While doctors say that mail-in stool samples bring new meaning to the phrase “dropping something in the mail,” they also note that this program is a way to continue cancer screenings while keeping people out of clinics and hospitals during the COVID-19 pandemic.

It’s also cost-effective and just as capable of detecting cancer as a colonoscopy.

“This project is succeeding in making cancer screenings less invasive and more widely available. Serendipitously, it now has the added benefit of being yet another way to keep people out of hospitals and clinics during pandemic shutdowns,” says Amit Singal, M.D., an author of the study, professor of internal medicine and population and data sciences, medical director of the Liver Tumor Program, and clinical chief of hepatology at UT Southwestern.

More than 53,200 Americans are expected to die of colon cancer in the United States in 2020, according to the National Cancer Institute.

The best practices identified in the article are:

The best practices were learned from mailed FIT campaigns throughout the United States, including one that reached more than 108,000 people in 25 North Texas counties including Tarrant County. Another campaign reached more than 15,000 persons at Parkland Health & Hospital System, the Dallas County safety-net health system. Nearly a third of the FIT kits were returned by recipients, and approximately 5 percent of them returned positive.

“What the test enables you to do is say you can do this in the privacy of your own home. A lot of people prefer that,” says Keith Argenbright, M.D., director of UT Southwestern’s Moncrief Cancer Institute in Fort Worth and a professor in the Harold C. Simmons Comprehensive Cancer Center.

Returned stool samples were tested for a blood antigen associated with colon cancer, and patients who tested positive were told they needed to schedule a diagnostic colonoscopy. Follow-up with patients from Dallas County was performed by UT Southwestern staff, and follow-up with patients from other counties was handled by staff from the Moncrief Cancer Institute, which is part of the Simmons Cancer Center.

Argenbright said oncologists nationwide fear cancer deaths will spike several years from now because many cancers will go undetected as people put off colonoscopies and other screenings during the pandemic.