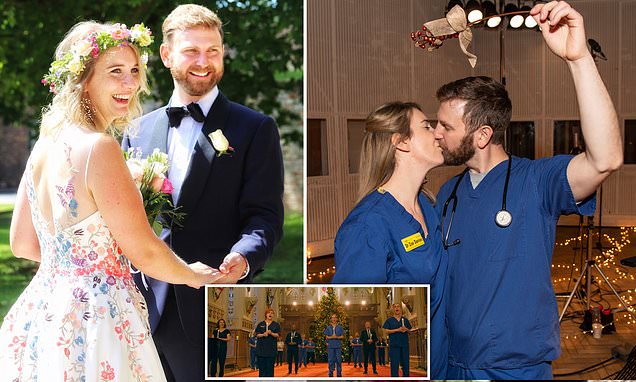 Inspiring stories of the Queen’s choir: Frontline medics who performed in the Monarch’s Christmas message tell of sacrifice, song and romance

Gareth Malone. Justin Bieber. The Lewisham and Greenwich NHS choir could easily have been forgiven for thinking they had already reached the height of fame with their celebrity collaborations.

Formed in 2012 for a BBC programme with choirmaster Gareth Malone, the choir went on to catch the attention of the Canadian pop star in 2015, when their single was vying with Bieber’s for the Christmas number one spot. The multi-millionaire told everyone to back the choir, securing them the top slot.

But Bieber, who teamed up with the NHS workers again after asking them to collaborate on a charity Christmas single of a new version of his UK hit, Holy, must now surely be relegated to second place in the NHS choir’s hall of fame. 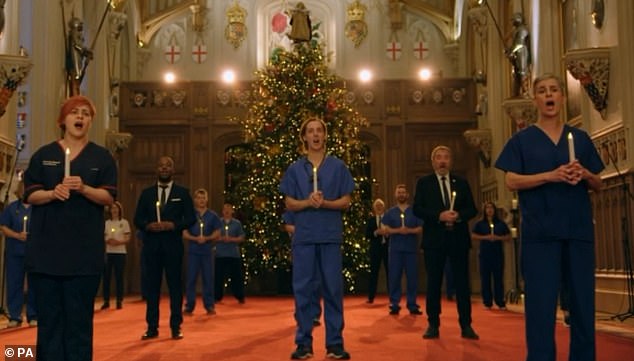 The Lewisham and Greenwich NHS choir could easily have been forgiven for thinking they had already reached the height of fame with their celebrity collaborations. They are pictured performing for the Queen’s Christmas Day broadcast

They can now boast a royal blessing, having been given the honour of performing for the Queen’s Christmas Day broadcast. For the choir, who yesterday spoke of the ‘amazing experience’ of being chosen to appear in Her Majesty’s annual recording, it’s been a year like no other.

Not least for two of its members, surgeon Tom Jackson, 35, and consultant endocrinologist Zoe Davies, 37, whose love story blossomed after meeting in the choir and who had set a date to get married in April 2020.

When, in August 2019, Tom got down on one knee in the South of France with a surprise proposal for Zoe, the excited couple inevitably started making plans for their dream wedding. The location was an easy decision to make.

The ceremony would take place in the soaring chapel of Christ’s College, Cambridge, where Zoe had been an undergraduate, followed by a reception in the college’s historic Grand Hall.

Proceedings would — inevitably — be accompanied by the NHS choir which had been the setting for their romance. 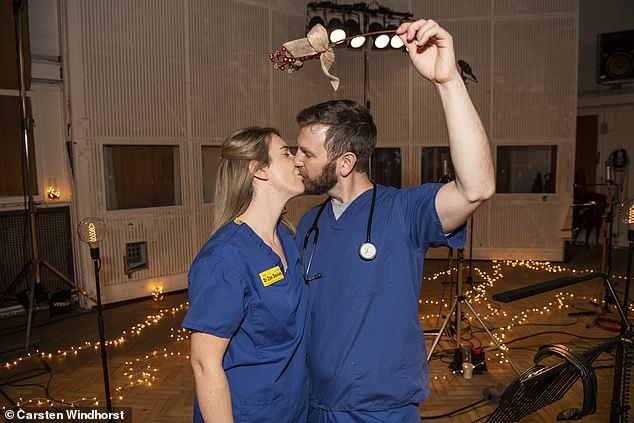 For the choir, who yesterday spoke of the ‘amazing experience’ of being chosen to appear in Her Majesty’s annual recording, it’s been a year like no other. Not least for two of its members, surgeon Tom Jackson, 35, and consultant endocrinologist Zoe Davies, 37, whose love story blossomed after meeting in the choir and who had set a date to get married in April 2020

Zoe had been a founding member in 2012 and met Tom when he joined in 2016. Their wedding would be a family affair, too.

‘Tom’s father is an Anglican vicar, so it was agreed he could marry us and our choir was going to sing for us,’ says Zoe. ‘We were having the reception in the Grand Hall, surrounded by 120 friends and family.’

But, as so many couples this year would discover, there was one problem. The date had been set for April 4, 2020 and Tom and Zoe, who live in South-East London, had to cancel during lockdown.

‘We’ve had a pretty difficult year,’ says Zoe. ‘My dad was really ill so in February, we had a ‘blessing’ in a hospital where he was a patient because we were worried he might pass away before the wedding.

‘Then when the universities closed, we realised we couldn’t get married at our original venue so tried to move the wedding to a smaller church, but that turned out to be 48 hours after Boris Johnson said: ‘No more weddings’.’ The couple were then dealt more blows after lockdown was announced.

‘Zoe was going to Yorkshire to care for her father in his last days so not only were we not going to be married but we realised we would have to live apart,’ says Tom.

‘As we listened to the PM’s speech, we decided there and then to say our vows to each other on our own and exchange our rings and be ‘married’ until the day we could do it all legally.

‘Shortly after that I had Covid. I’m lucky that I wasn’t too badly affected but even now I’m not up to peak fitness. Then in June sadly, Zoe’s father died.’

Throughout it all, Tom and Zoe continued to find support from the choir that brought them together.

Tom says: ‘I’d been in my school choir and it was one of the theatre nurses who caught me singing one day and said I should join. And when I did, there was this gorgeous blonde girl singing a solo. That was Zoe.’

Zoe adds: ‘I immediately felt a connection with him and we became good friends over the next few months — particularly when we performed with the choir at Glastonbury.

‘We camped with the whole choir and Tom and I watched Adele together on the Saturday night. After that I just fell in love with him. Tom was a complete gentleman and often drove me home from choir rehearsals. We started dating properly around six months after we’d met.’

On the day the couple were due to marry in April, the choir surprised them — along with dozens of their guests — with a ‘virtual wedding’ on Zoom and performed a special song.

‘It was such a surprise,’ says Zoe. ‘Every part of being in the choir has been a ‘pinch me’ moment and throughout this year we’ve kept rehearsing together virtually with our fantastic choirmaster Phil. It has provided us with a really big support to know we are there for each other.’

In August, the couple finally managed to marry legally, with just ten family members to witness the ceremony. 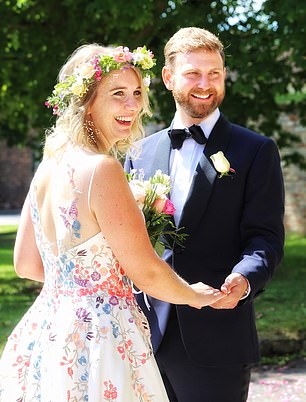 In August, the couple finally managed to marry legally, with just ten family members to witness the ceremony. ‘It was in a church in the North Yorkshire village where my mum still lives and it was perfect,’ says Zoe

‘It was in a church in the North Yorkshire village where my mum still lives and it was perfect,’ says Zoe.

‘People in the pubs and street were cheering us because it was the first wedding they’d seen all year.’

Their honeymoon abroad was out of the question so in November they decided to spend time together at home. But it just so happened that the recording of the charity single at Abbey Road was organised for that weekend and 18 of the choir were able to meet up — socially distanced, of course — to record their vocals. Bieber’s voice was added later.

For many of the choir it was the first time they had seen each other in the flesh since the start of the pandemic.

‘It was a really special moment for us,’ recalls Tom. It

also supplied some unexpected kudos. ‘Teaming up with an international superstar to record a song in Abbey Road was something way beyond my dreams,’ says choir member Graeme Tyler, 47, a staff nurse in the Children’s Emergency Department, who lives in Bromley and is married with three children.

‘Even my teenage son admitted, ‘Yeah, that’s pretty cool Dad’, which is high praise from a 17-year-old.’

Caroline Smith, 47, the organiser of the choir, agrees. ‘Recording at Abbey Road studios was very special,’ she says.

‘I was very nervous how it would sound because we could only hear our own voices in rehearsal but I think it sounds great.

Caroline, a children’s community physiotherapist has been part of the choir since it first began with Gareth Malone eight years ago. ‘We loved it so much that when filming ended we wanted to keep it going,’ she says.

‘As I’m part-time, I started organising rehearsals and dates for performances and it took off from there. This year has been very different. When we realised that we wouldn’t be able to meet up, we ended up doing Zoom rehearsals. It’s not the same because you can’t all sing together. You’re literally singing to yourself and all you can hear is Phil, our choir director giving you your line to sing. But it’s lovely to see people’s faces. And this song is about how we’ve really needed each other this year.’

Rachael Reader, 33, an upper limb physiotherapist at the Queen Elizabeth Hospital, joined the choir after the Christmas number one, initially as a means of stress relief.

‘Since the pandemic I’ve been deployed into several departments, including ITU where I helped care for Covid patients, turning them over to help them breathe.

I hadn’t worked on the ITU for years and it was claustrophobic in all the PPE,’ she says.

‘Singing is just great for stress-relief. Before Covid, if you were having a bad day there would always be someone there to give you a hug and take you for a drink. That’s not possible now, but it’s still been such a support to catch up in rehearsals.’

Midwife Lizzie Farrant, 39, agrees: ‘This year has been frightening and working on maternity and antenatal wards has been challenging, but I’ve never felt more of a sense of being part of the NHS family. I think it’s helped a lot of us feel more resilient.’

Sentiments shared by Caroline Duffy, 56, a theatre nurse who studied music at university.

‘To be able to sing with my friends on days off, has been something positive to cling to,’ she says.

Johan Lindskog, 35, an anaesthetic registrar, admits he was thrown into the deep end with the pandemic.

‘This was my first year as a registrar. As I specialise in all things airways and lungs, I was involved in helping to intubate the sickest Covid patients and stabilise them ready for ITU,’ he says.

‘At first, it was very daunting seeing so many sick people. We’ve all had many long and exhausting shifts that leave you feeling quite isolated from the world.’

What better show of public gratitude than to be championed by the Queen?

As Zoe says: ‘After everything that’s happened in 2020, it’s just great to be able to spread a little joy.’

No doubt, Her Majesty would agree.