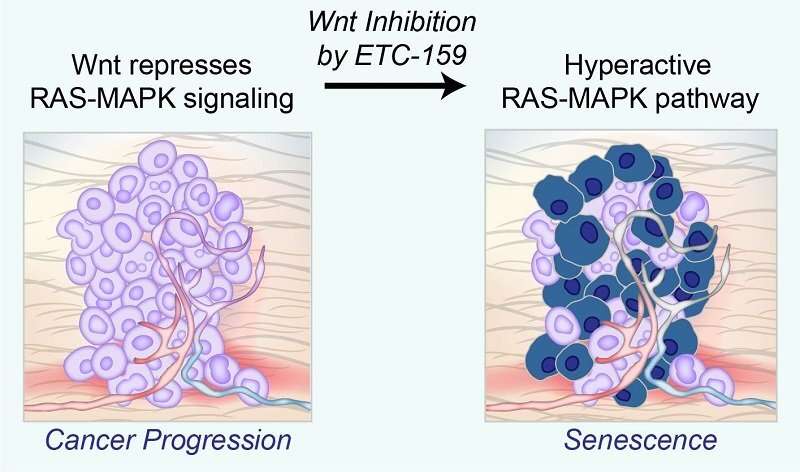 Sometimes, too much of a good thing can turn out to be bad. This is certainly the case for the excessive cell growth found in cancer. But when cancers try to grow too fast, this excessive speed can cause a type of cellular aging that actually results in arrested growth. Scientists at Duke-NUS Medical School have now discovered that a well-known signaling pathway helps cancers grow by blocking the pro-growth signals from a second major cancer pathway.

Inhibiting Wnt signaling with ETC-159 reactivates the hyperactive RAS-MAPK pathway, causing cells to led undergo senescence.Many cancers are driven by activating mutations in the RAS-MAPK signaling pathway which triggers a cascade of proteins that directs cells to grow, divide and migrate. Mutations in proteins involved in this cascade can turn on genes that make this process go into overdrive, causing cells to grow out of control and aggressively invade other parts of the body. However, too much RAS-MAPK signaling causes cancer cells to prematurely age, and eventually stop growing—a process called cellular senescence.

The team made the discovery while investigating how Wnt proteins regulate pancreatic cancers. Scientists have long observed that genetic mutations causing Wnt proteins to be hyperactive drive many common cancers. The long-held thinking had been that this is because Wnt signaling causes cells to grow too fast. The new findings suggest this idea needs re-evaluation.

By making RAS-MAPK signaling “not too hot and not too cold,” Wnt signaling enables cancers to grow steadily instead of heading towards the premature aging that can be caused by excessive RAS-MAPK signaling. These findings support a growing awareness that cancers need a “just-right” level of RAS-MAPK signaling. Disrupting modulating signals like Wnt can cause cancers to stop growing by forcing them to undergo cellular senescence, similar to just getting old.

Assistant Professor Babita Madan, from Duke-NUS Cancer and Stem Cell Biology (CSCB) Program, a senior co-author of the study, explained, “Using an experimental drug, ETC-159 , to stop Wnts in multiple models of human pancreatic and colorectal cancer, we found that, unexpectedly, Wnt signaling turns off as many genes as it turns on.”

Digging deeper, the team made the connection between Wnt signaling and the diminished activity of the RAS-MAPK pathway. Inhibiting Wnt signaling with ETC-159 and other anti-cancer drugs actually activated RAS-MAPK signaling, while inhibiting cancer growth at the same time.

“This makes sense; while activating mutations in the RAS-MAPK pathway are common in cancer, in isolation, they cause cells to stop growing by causing senescence, a form of aging-induced arrested cell growth,” said Professor David Virshup, Director of the CSCB Program, and also a senior co-author of the study. (Prof Virshup’s seminal research on Wnts led to the development of ETC-159.) “By reining in RAS-MAPK signaling, Wnt signaling achieves Goldilocks’ goal of getting it not too hot, not too cold, but just right.”

One implication of this research is that it opens up additional ways to attack cancers. The traditional way is to kill cancer cells, however this new study shows that stopping cancer cell growth can be achieved by inducing senescence.