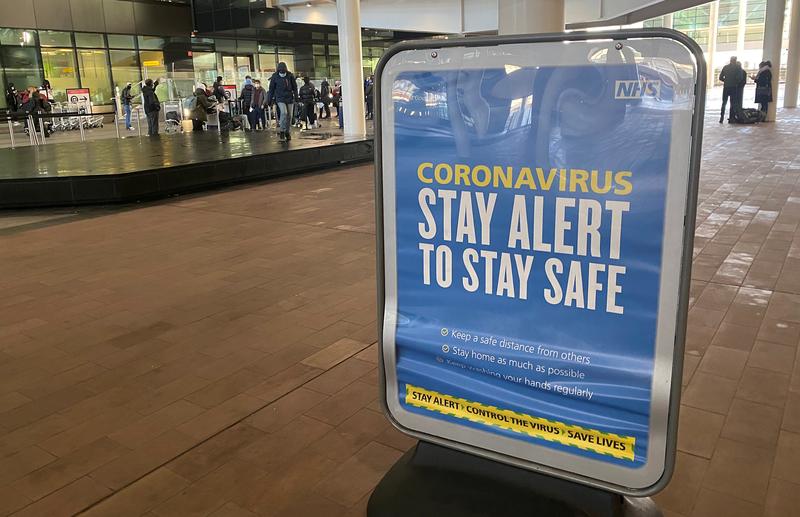 LONDON (Reuters) – Britain will confirm in early May whether it will allow international travel to resume from May 17 and which countries will fall into the red, amber or green categories in a new traffic light system based on COVID-19 risks.

FILE PHOTO: A public health message is displayed at a terminal at Heathrow Airport, amid the spread of the coronavirus disease (COVID-19) pandemic, London, Britain, January 16, 2021. REUTERS/Toby Melville

Giving new details of how it hopes to allow people to travel this summer, the government’s Global Travel Taskforce also said work was ongoing to develop a certification system, sometimes called “vaccine passports”, for inbound and outbound travel.

Britain is gradually emerging from a strict winter lockdown prompted by a huge surge in COVID-19 infections and deaths. As things stand, international travel is banned except under specific circumstances defined by the government.

Case numbers have dropped dramatically since the January peak, and one of the government’s top priorities is to avoid undermining the success of the national COVID-19 vaccination programme by importing vaccine-resistant variants from overseas.

So far, more than 31.8 million people in the United Kingdom have received at least one dose of vaccine, while 6.1 million have received two, in one of the fastest mass vaccination campaigns in the world.

“The framework announced today will help allow us to reopen travel safely and sustainably, ensure we protect our hard-won achievements on the vaccine rollout and offer peace of mind to both passengers and industry as we begin to take trips abroad once again,” said Transport Secretary Grant Shapps.

Airlines, travel companies and members of the public eager to plan their summer holidays have been putting pressure on the government to explain what the rules would be.

Under the new traffic light system, restrictions such as hotel quarantine, home quarantine and compulsory COVID tests will apply differently depending on which category of country a passenger has come from.

Factors in assessing which category a country should fall into will include the percentage of the population that has been vaccinated, the rate of infection, the prevalence of variants of concern and the country’s access to reliable genomic sequencing.

There will be a “green watchlist” identifying countries most at risk of moving from green to amber, although the government said it would not hesitate to change a country’s category at short notice should the data show the risk had increased.

The taskforce recommended removing a “permission to travel form” currently required, meaning passengers would no longer need to prove they had a valid reason for leaving Britain.

It also said it was working with the travel industry and with private COVID-19 test providers to reduce the cost of travel for the British public.

“This could include cheaper tests being used when holidaymakers return home, as well as whether the Government would be able to provide pre-departure tests,” the statement from the travel taskforce said.

Under current rules, free testing provided by the National Health Service is not available for the purpose of travel, meaning passengers have to turn to private providers who charge high fees for tests.

The taskforce indicated that a digital travel certification system would be part of the plan, but gave few details beyond saying that Britain wanted to play a leading role in developing international standards in this area.