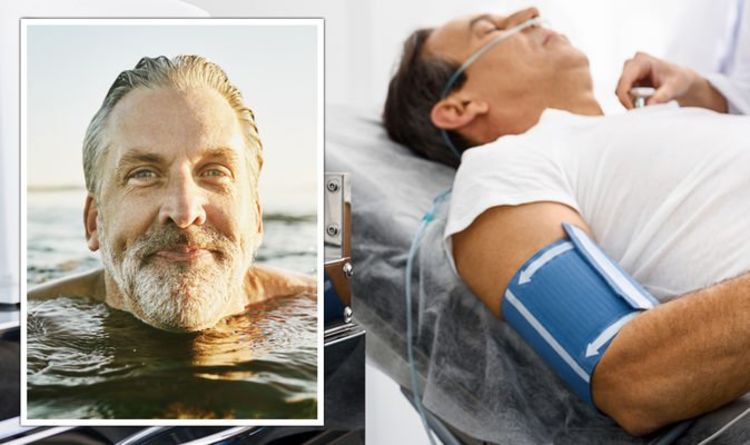 Researchers suggest jogging, running, walking cycling and swimming – when undertaken for at least 30 minutes seven days a week – could offer the most promising results.

Current recommendations for individuals at risk of hypertension advise getting an average of half an hour of moderate-intensity aerobic exercise five to seven days a week, with researchers stressing that consistency in key.

Some studies have found that running and walking make the biggest difference to blood pressure in hypertensive individuals.

One experiment, which included 35 women and 32 men aged between 55 and 80 asked participants to follow three different daily plans.

READ MORE: Back pain exercises: The ‘jarring’ workout you should AVOID or risk lower backache pain

Each plan was undertaken in a random order, and was separated with a break of six days in between.

One plan consisted of uninterrupted sitting for eight hours, while a second consisted of one hour of sitting before 30 minutes of walking on a treadmill at moderate intensity, followed by 6.5 hours of sitting.

Under the third plan, participants were asked to sit for an hour before walking on a treadmill for 30 minutes, followed by 6.5 hours of sitting, which was interrupted every 30 minutes with three minutes of walking at light intensity.

Findings revealed that blood pressure was lowered in both men and women who took part in all three exercise plans.

Michael Wheeler, who authored the study, said: “For both men and women, the magnitude of reductions in average in average systolic blood pressure following exercise and breaking in sitting approached what might be expected from anti-hypertensive medication in this population to reduce the risk death from heart disease and stroke.”

The effects was more pronounced in systolic pressure, which is deemed a stronger predictor of heart problems than diastolic pressure.

A 2020 study published in the Journal of the American College of Cardiology by a team from the Institute of cardiovascular science at University College, revealed the promising effects of consistent training.

Notably, they determined that first-time marathon runners training for the London Marathon in 2016 ad 2017 showed significant improvements in blood pressure and a four year reduction in vascular age.

Researchers at Harvard University warned that not all blood pressure-lowering strengthening exercise were safe for condition.

Recent studies have also have illustrated the detrimental effects other forms of exercise can have for blood pressure, notably isometric resistance training, a form of physical strength training.

Deepak L Bhatt, Editor in Chief at Harvard Heart Letter, explained that isometric exercises, which are typically performed against opposing forces – like the wall or the floor – could significantly raise blood pressure.

These dynamic exercises usually aim to work the muscles and joints, and are often practised with elasticised band, dumbbell or other free weights.

Bhatt explained: “When you perform any type of exercise – whether it’s aerobic, strength training, stretching or even balance exercises – both blood pressure and heart rates increase to meet the greater demand for oxygen from your muscles.

“Some research suggests that isometric exercise may boost blood pressure more than dynamic exercise, but the evidence isn’t yet conclusive.”

As a general guide, optimal blood pressure is considered to be between 90/60mmHg and 120/80mmHg. A blood pressure above 140mmHg is associated with an increased risk of stroke, kidney disease, and dementia.