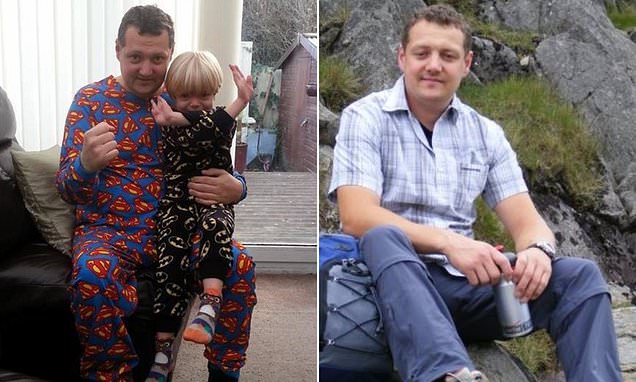 A heart-failure drug that dramatically improves symptoms and helps boost survival has been approved for NHS use – giving new hope to half a million patients.

Called dapagliflozin, the daily tablets are already taken by Type 2 diabetics to control blood sugar levels, but the £244-a-year medication will now be offered to those suffering one of the main types of heart failure, following stunning trial results.

And it might save one of the first to get the drug on the NHS, a 44-year-old father-of-two, from needing a heart transplant. 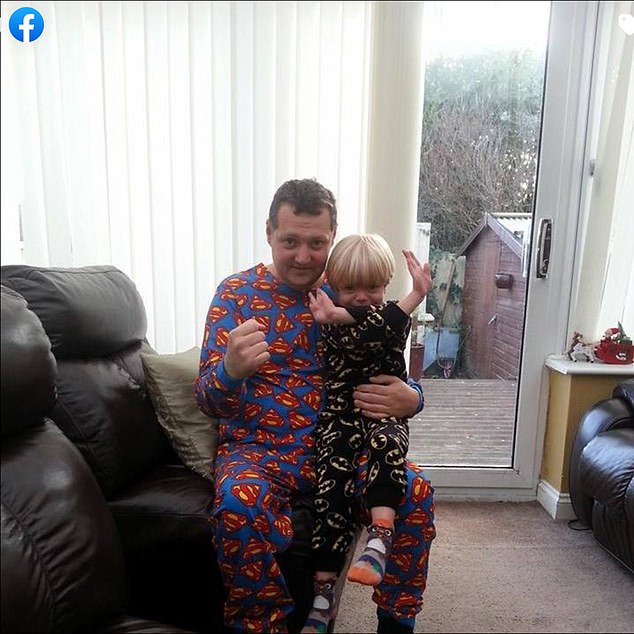 Daniel Smith, pictured in December 2015 with one of his sons had just been placed on the transplant list having suffered heart failure in 2012 after a mild viral infection 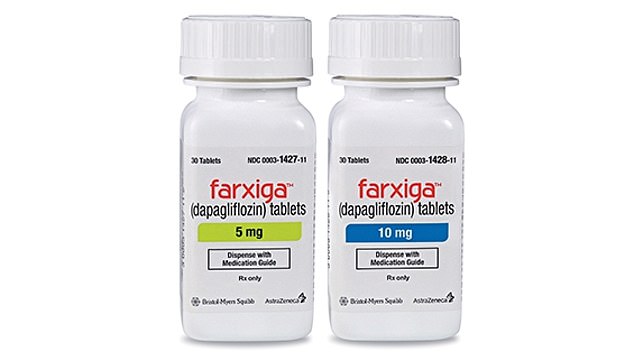 Mr Smith was placed on a clinical trial using the drug dapagliflozin, pictured, which has dramatically improved his health

Former electrician Daniel Smith, from Nottingham, was diagnosed with heart failure, triggered by a mild viral infection, in 2012. Fit and healthy prior to this, Daniel enjoying hiking and climbed Snowdon – but suffered gradually worsening health that left him housebound.

Daniel was prescribed the new drug dapagliflozin in the week before Christmas and is already feeling its remarkable effects.

He said: ‘Before, I would get out of breath just trying to make my bed, and wake up gasping for air at night.

‘Imagine running 100m as fast as you can, and how out of breath you’d feel afterwards – that’s how heart failure can make you feel, just sitting doing nothing. But that seems to have stopped, and I’ve only been on the tablets a few weeks.’

Heart failure affects roughly one million Britons. Previously, one in five would die within a year of diagnosis and just a third will survive for more than ten years. University of Glasgow cardiologist Professor John McMurray, who led a 2019 study into the drug which led to last month’s approval, said: ‘We can’t cure it yet, but in some cases we can now put the condition into complete remission using a combination of drugs, including dapagliflozin, and save some sufferers progressing to the point they need a heart transplant.’

Heart failure means the heart becomes unable to pump blood effectively around the body. It usually happens if the cardiac muscle has become too weak, or stiff. One of the most common triggers is a heart attack, which damages the muscle. It can also be a result of problems with heart valves, viral infections and genetics. 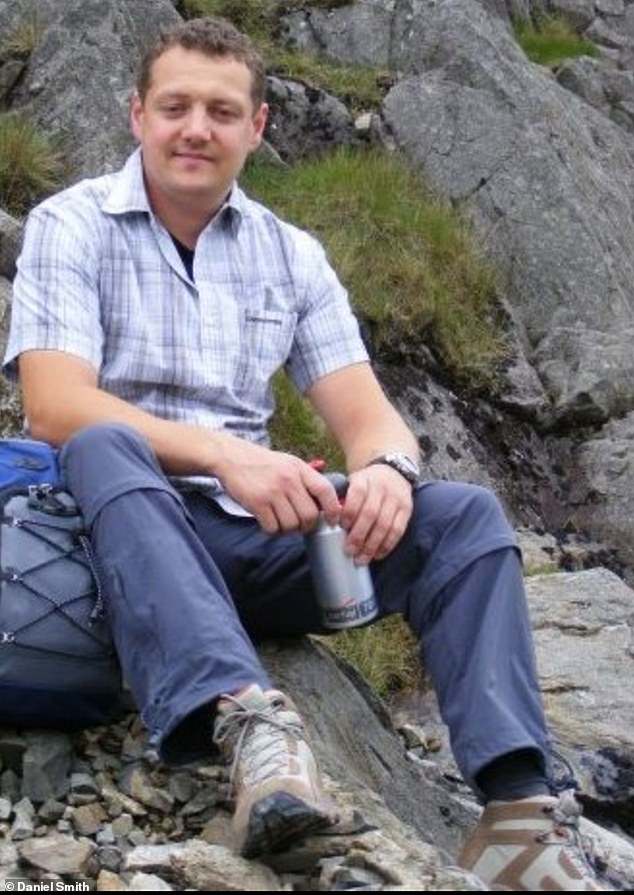 Prior to his illness, Mr Smith, pictured, was fit and healthy and pictured here in October 2009, climbed Mount Snowdon in Wales

Although heart disease can occur at any age, it’s most common in older people. It causes a range of problems, including elevated pressure in the blood vessels around the lungs, forcing fluid into them – leading to extreme breathlessness and fatigue, as the body is starved of oxygen. Fluid can also build up in the abdomen and limbs, leading to bloating and swelling.

The number of Britons affected has been steadily rising over the decades due to a combination of an ageing population and more people surviving heart attacks. An increasing number of patients living with diabetes and high blood pressure, which in turn raise the risk of heart failure, is also a factor. 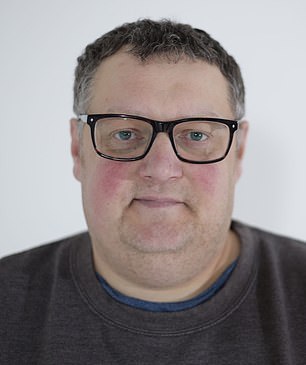 Mr Smith, pictured here in February 2020 said before his treatment making his bed was an ordeal which would leave him out of breath

Symptoms can suddenly worsen, which is why heart failure causes roughly 86,000 emergency hospital admissions every year. Worse, a major report in 2018 found two in three cases were being missed by GPs, who mistook symptoms – often vague in the earlier stages – for asthma or simply old age.

Until now, for many, the only way out would be a heart transplant. But dapagliflozin has an astonishing effect, even in the most severely affected patients.

In a trial of almost 5,000 patients, the tablets, taken alongside standard heart-failure medication, led to a significant 30 per cent reduction in urgent hospital admissions, and a remarkable 18 per cent lower risk of death from cardiovascular disease over two years.

Prof McMurray said: ‘We asked patients to fill in forms relating to frequency and severity of their symptoms, quality of life, and how their illness limited them. A treatment that gives a five-point improvement would be considered a success, but we saw some reporting a ten- or 15-point improvement. We’ve never seen anything like it.’

Improvements seem to last for as long as patients are on the drug. No serious side effects are seen, though some patients experience low blood sugar, or hypoglycaemia – seen in diabetics with heart failure who also take insulin or other medication for the condition.

Prof McMurray said: ‘Until recently, you’d expect people with heart failure not to survive more than a few years, but now we routinely see patients who’ve been alive for ten years or longer.’

The drug has given Daniel a new sense of optimism after a difficult year. When he first became unwell, at just 35, his breathlessness was put down to stress, and he was prescribed anti-anxiety medication.

After months of worsening symptoms, he was given a heart scan which revealed the true cause.

Daniel said: They told me the heart failure was probably triggered by a virus, but I don’t remember being ill,’ His condition remained stable until 2015 when he experienced a sudden decline. Daniel was put on the transplant list and started new medication which held him stable until late 2019, but he began to worsen again.

Having been housebound all last year, he was prescribed dapagliflozin the moment it was approved in December.

The father-of-two added: ‘It’s hard to tell, as in lockdown we can’t go very far anyway, but I do feel better already. I am less breathless and less exhausted. I don’t feel so bloated, either.

‘My big hope is that I can start to do things like play football or go for bike rides with my kids. And maybe it’ll keep me from a transplant.’

The drug is one of a class of medicines called sodium-glucose co-transporter-2 (SGLT2) inhibitors. They work in diabetes by helping to flush excess glucose out of the body, in the urine.

Experts don’t fully understand why they have such a powerful effect on heart failure but they may cause changes in the heart itself.

Dapagliflozin is currently available only for patients with a condition called reduced ejection fraction, or HFrEF, one of the two main types of heart faulure and affecting some 500,000 adults in England and Wales.

This year, two major studies looking at dapagliflozin in patients with the other main type, called heart failure with preserved ejection fraction, or HFpEF, will report findings.

Prof McMurray says early signs are promising. ‘For the first time, we may soon have a drug for these patients as well.

‘There are other drugs similar to dapagliflozin that we now know work, too, and more coming down the line. We’re chipping away at this disease.’