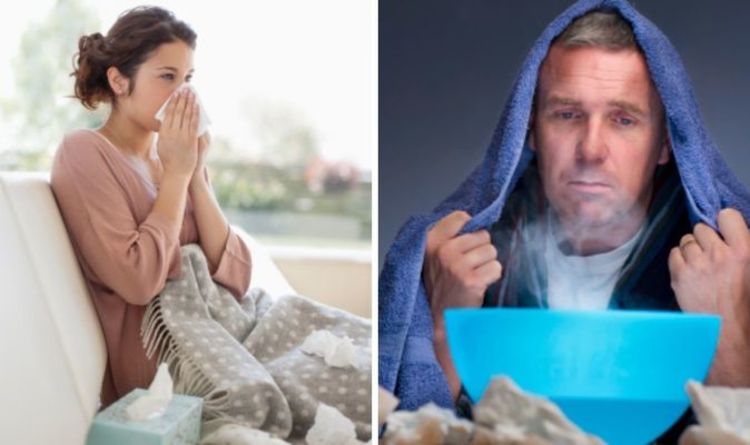 Nasal congestion is the proper term for a blocked or stuffy nose, and it can be caused by a number of conditions. Fortunately, some of these conditions will settle on their own. However, you may need to treat your blocked nose at home to help it fade away quickly. Here’s how to unblock your nose naturally – and FAST, according to Patient Info and Healthline.

Nasal congestion is caused by anything that irritates or inflames the nasal tissues.

This could be an infection such as a cold, flu or sinusitis, allergies such as food allergies or hayfever, or irritants such as tobacco smoke or car exhaust (nonallergic rhinitis).

Very rarely, nasal congestion could be caused by a tumour.

How to unblock nose naturally – and FAST

To unblock a nose, you need to try and figure out what caused it in the first place.

The most common causes, such as the common cold or the flu, will get better on their own.

However, there are a number of treatments that will improve the situation quickly and make you feel better.

Most of the time you don’t need to see a doctor for nasal congestion, Patient Info explains.

However, you should consider seeing a doctor if:

Here are five examples of natural blocked nose treatments, but be warned that they will only work for a short period of time and need repeating until the cause has gone away.

Put boiling water from a kettle in a large bowl or basin, and set it on a table (being extra careful not to burn yourself).

Patient Info says: “Sit on a chair at the table and put your face over the bowl, breathing normally for five or 10 minutes.

“Alternatively, you can buy a steam cup from a chemist and breathe the steam through the mask.

“For small children, the safest method of steam inhalation is in the bathroom.

“Shut the door, turn on the hot shower and/or hot tap and sit with your child (outside the shower as you want the water very hot) while looking at a book or playing with a toy for five to 10 minutes.”

Saltwater (saline) may be helpful to clear a blocked nose for a short time, but you’ll need to repeat the process a good few times.

Patient Info explains that you can buy saline drops from a chemist or get them on prescription.

They are sometimes used in babies who are congested, so they are better able to feed.

However, there are also saline sprays and solutions which aim to wash out the passageways of the nose.

The site explains: “These all make the gunk blocking the nose more liquid so that it drains out more easily.”

Soak a washcloth or flannel in warm water, squeeze out the excess water and pop it on your upper nose and lower forehead.

Healthline reckons this may help unclog a stuffy nose by reducing inflammation and opening up the nasal passages from the outside.

The warmth may help relieve the inflammation in your nostrils and sinuses and make it easier to breathe, so make sure the compress is warm enough to do the job but not too hot that it will burn your skin.

Eating spicy food may help to open up your nasal passages and unblock your nose.

Healthline recommends eating chilli peppers, ginger, turmeric and garlic, as these foods can trigger gustatory rhinitis and cause the body to make more mucus.

This will encourage your nose to run and could solve the blockage.

Propping your head up with pillows at night could help to fight the battle of a blocked nose.

Healthline explains: “Keeping your head elevated can prevent mucus from pooling in your sinuses at night. It can also relieve sinus pressure.

“Lie on your back and use an extra pillow to ensure that your head is at a slightly higher angle than the rest of your body.”