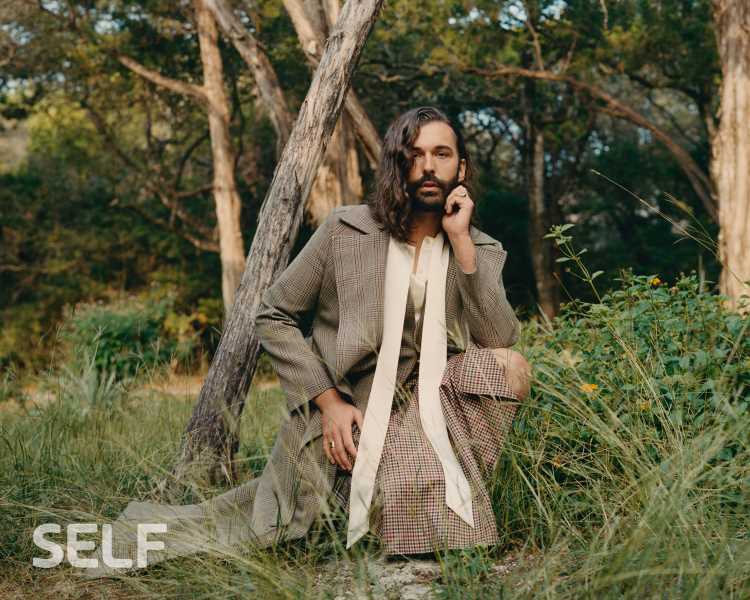 Jonathan Van Ness has been at home — gardening and spending time with his four cats — throughout the COVID-19 pandemic. As someone who is HIV positive and therefore at a higher risk of severe illness, he feels safer staying at home. And he is aware of how much of a privilege it is to be able to do so.

As one of the five stars of Netflix’s hit show Queer Eye, Van Ness, who uses he/she/they pronouns, went from barely making ends meet as a hairstylist to a celebrity over the last four years. He was filming a new season of the show in Austin when the pandemic hit, and was able to buy a home there, where he has stayed for the last nine months. Van Ness, 33, told SELF for their digital cover that he frequently feels guilty that he’s now financially successful enough to stay home.

“One thing I struggle with a lot is thinking about what I would have done in this pandemic if this entire situation happened, like, four years ago,” he said. “If I didn’t have a platform and I didn’t have all these opportunities — what would I have been doing if I still had my studio salon space?” Seeing his hairstyling clients could have put Van Ness at risk as an immunocompromised person.

“Anytime you hear about a respiratory pandemic and living with a chronic illness, whether it’s HIV, diabetes — whatever your chronic illness is — I think, yes, you are going to be more nervous,” he said.

Van Ness said that before the show, his annual income was $10,000 some years and he relied on HIV social programs, such as the AIDS Drug Assistance Program, to afford his medications. Now, he has a private doctor and private health insurance, and doesn't have to worry about getting his regular medications and care during the pandemic. That privilege, he said, is something that many people living with HIV — and other disenfranchised individuals — do not have.

“There are not enough resources in the HIV social safety net anywhere. And when it comes to Black people, Black women, people of color, the assault on Planned Parenthood — there isn’t enough access anywhere,” he said. “And the access and the care that we do have, you constantly have to fight for it. If you turn your back for even one second, those budgets are f—ing slashed and the access isn’t there. And the Trump administration has been really f—ing difficult; [it has] just made everything much more difficult for folks to get access.” Van Ness said he’s been extremely cautious this year to minimize his risk of getting COVID-19.

“I am that person in goggles and a mask and a face shield at Whole Foods, but I don’t care,” he said. “I think it’s chic. I love it. Let me give you full hazmat realness out here. I don’t mind if it keeps me more safe.”