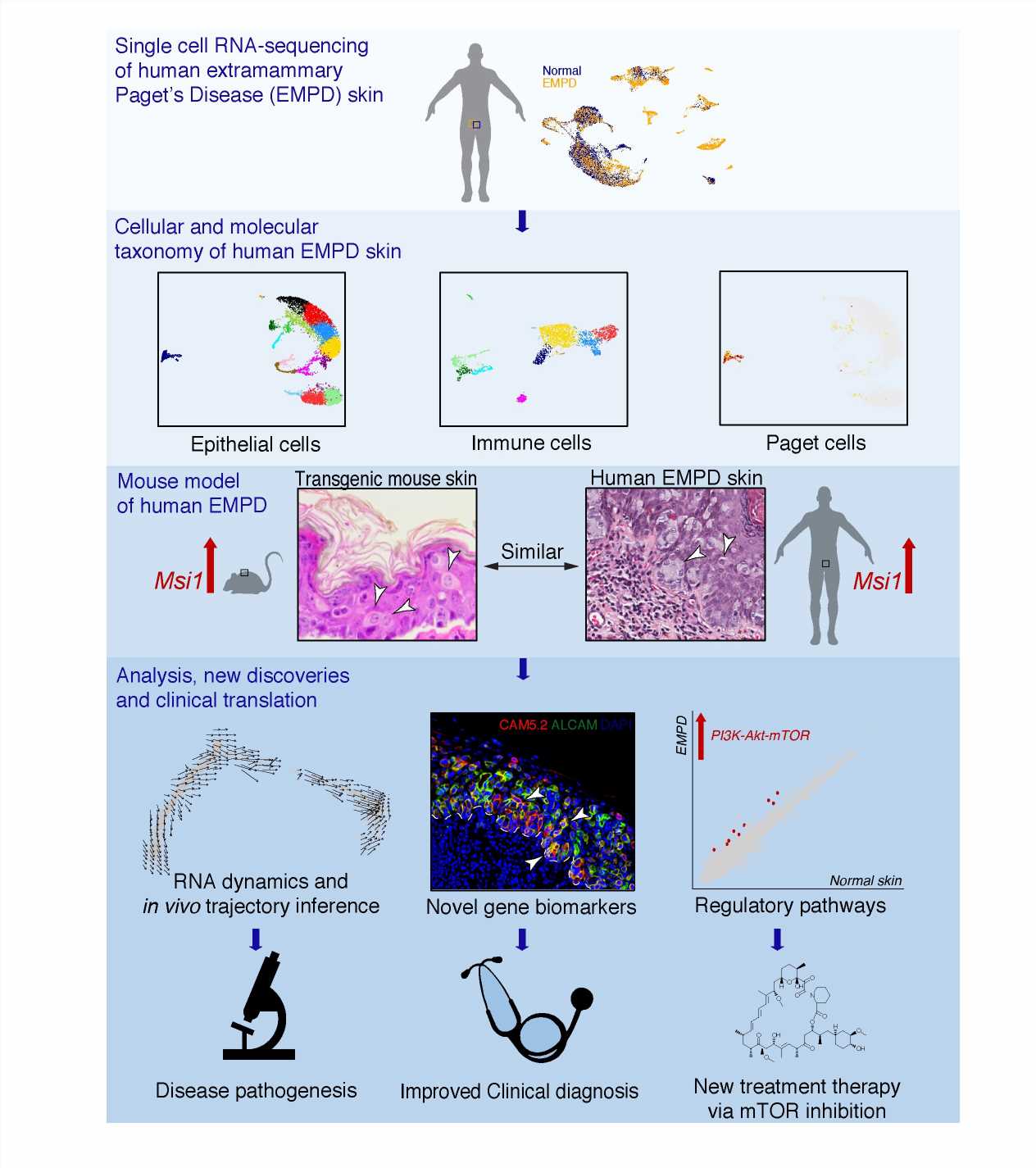 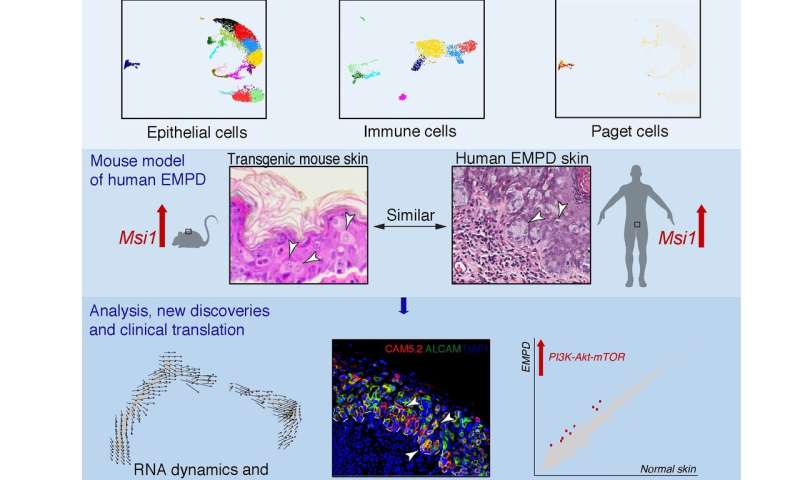 Researchers from the University of California, Irvine, in collaboration with their colleagues from Beijing, China, have gained new insights into the development of poorly understood malignant skin cancers collectively known as Paget’s disease. The team identified new biomarker genes that highly correlate with Paget’s disease. The group then used a Food and Drug Administration (FDA) approved drug to target one of the newly identified molecular features of Paget’s disease, leading to prominently improved clinical symptoms in a small cohort of Chinese patients. Their results have been published online in Cell Research.

“This is a prime example on how sophisticated computational analysis and interdisciplinary collaborations facilitate biomedical discoveries. Single-cell genomics is becoming a major emerging tool to delineate cellular and molecule machineries that encode diseases, and recently UCI has made tremendous stride in this fast-growing research area,” said Qing Nie, a study co-author and Chancellor’s Professor of mathematics and developmental & cell biology at UCI.

Paget’s disease are rare skin cancers. At the cellular level, these cancers manifest themselves as having easily identifiable large, ‘clear’-looking cells, called Paget cells. The origin of these unique looking cancer cells is currently under debate, but their emergence in skin is a useful feature marker that helps with Paget’s disease diagnosis.

Very little is known about the underlying workings of this disease, and unsurprisingly, there are no known drugs that can efficiently slow down or revert the condition. The primary approach to treating Paget’s disease consists of trying to surgically remove it, or destroy it with chemotherapy, radiotherapy or laser ablation- approaches that are not very effective and associate with disease recurrence.

“Developing a new understanding of the ‘molecular nature’ of Paget’s disease will undoubtedly uncover novel ‘disease genes.’ At least some of these genes might be targeted using medicines that are already FDA-approved for unrelated conditions. This approach could dramatically speed up the development time frame for Paget’s disease medicines,” said Maksim Plikus, study co-author and associate professor of developmental & cell biology at UCI.

To study how Paget’s disease develops at the molecular level, the Beijing- and Irvine-based researchers comprehensively examined gene features of Paget’s disease tissue samples from human patients using a new technique called single-cell RNA-sequencing. The technique allows for the identification of all extant cell types based on their unique genes. This helped the team identify previously unrecognized but prominent new disease biomarkers. One such biomarker was the gene called MSI1, or Musashi-1. Inside of cells, MSI1 binds to many RNA molecules, regulating how they encode diverse proteins.

Because studying the roles of new biomarker genes in humans has limitations, the team of researchers developed new transgenic mice, whose skin was made to have high amounts of MSI1, potentially imitating human Paget’s disease. Strikingly, just after a few days, these mice developed prominent changes in their skin that closely resembled human Paget’s disease, including the formation of large and “clear”-looking Paget-like cells. Further molecular studies with the new model uncovered many more previously unappreciated gene changes that are likely relevant to Paget’s disease cancers in human patients.

Extrapolated from mutant mouse studies, the scientists identified one specific molecular change—highly overactive mTOR signaling, which stands for the mammalian target of rapamycin. Activation of mTOR has been previously and conclusively identified as a key molecular feature of other cancer types, including certain intestinal cancers.

Because mTOR is so involved in other diseases, FDA-approved drugs, such as rapamycin, currently exist which efficiently block mTOR signaling. Using this information, the researchers conducted a small-scale clinical study, in which Paget’s disease patients were treated topically with rapamycin cream. A few weeks of rapamycin treatment lead to a clinically positive response in all enrolled patients, including a reduction on the number of Paget cells; thickness of epidermis in lesioned skin; as well as the morphology and organization of epidermis became normal. While this result is very preliminary and a larger-scale clinical study is clearly needed, it is nonetheless encouraging.