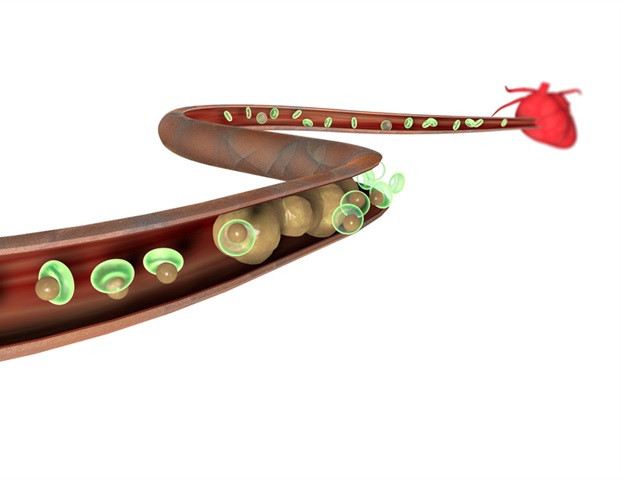 Lipoprotein particle metabolism can occur via the exogenous or endogenous pathway, depending whether the source of origin is dietary or hepatic. Both the exogenous and endogenous metabolic pathways of lipoproteins are outlined below.

The vast majority of dietary lipids are triglycerides (>95%), and the remaining are phospholipids, free fatty acids, cholesterol and fat-soluble vitamins.

Triglycerides from the diet are digested in the gastrointestinal tract to form monoglycerides and free fatty acids through various processes, including gastric lipase, bile emulsification and pancreatic lipase. Similarly, cholesterol esters from the diet undergo a process of de-esterification to form free cholesterol.

Monoglycerides, free fatty acids and cholesterol are soluble in the bile acid micelles and can be absorbed from the chymus into the enterocytes due to their smaller size.

Inside the enterocytes, they are reassembled into triglycerides and combined with cholesterol to form large chylomicron lipoproteins. Apolipoprotein B-48 regulates the secretion of these particles into the lacteals, and the chylomicrons then circulate through the lymphatic vessels and into the bloodstream.

Chylomicrons are responsible for the transport of dietary triglycerides and cholesterol from the enterocytes and into the circulation system. In the adipose and muscle tissue the majority of the triglycerides in the chylomicron can be converted to fatty acids and glycerol to provide a source of energy. Depleted of energy, the chylomicron remnants rich in cholesterol travel back to the liver to be cleared from the body, through a process mediated by apoprotein E.

Lipoproteins can be synthesized in the liver with endogenous triglycerides and cholesterol in the hepatocytes, such as those from chylomicron remnants.

HDL particles are lipoproteins that are initially free of cholesterol and are synthesized in the enterocytes and the liver. The complex metabolism of HDL involved the acquisition of cholesterol from peripheral tissues and other lipoproteins, such that it can be transported to where it is needed.

The VLDL then circulates in the bloodstream and travel to the peripheral adipose and muscle tissues in the body. By way of a hydrolysis reaction, the triglycerides can be broken down to supply fatty acids and glycerol to the cells as a source of energy.

The energy-depleted VLDL remnants, also known as intermediate density lipoproteins (IDLs), have a higher proportion of cholesterol, as the triglycerides have been consumed. They continue to circulate in the bloodstream until they are absorbed by the liver with the involvement of apolipoproetein E. Alternatively, the remnants can be further hydrolyzed by hepatic lipase, releasing more glycerol and fatty acids, to form low-density lipoproteins (LDL) that are the type of lipoproteins that are richest in cholesterol.

The LDL circulates in the bloodstream and can be absorbed by cells in the liver or peripheral tissues. The particles can bind to the target tissue with the LDL receptor with the involvement of apolipoprotein B-100. The LDL can then be absorbed by endocytosis, and the particles hydrolyzed to release lipids such as cholesterol.

Yolanda graduated with a Bachelor of Pharmacy at the University of South Australia and has experience working in both Australia and Italy. She is passionate about how medicine, diet and lifestyle affect our health and enjoys helping people understand this. In her spare time she loves to explore the world and learn about new cultures and languages.