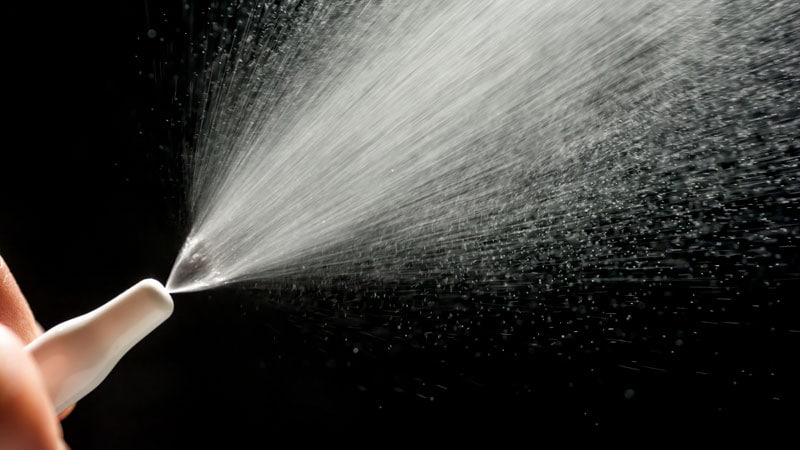 A nasal spray that delivers a short-acting calcium-channel blocker (CCB), envisioned as a self-treatment alternative to a pill-in-the-pocket strategy for managing bouts of paroxysmal supraventricular tachycardia (PSVT), has advanced another step in its development journey.

Most patients in a placebo-controlled evaluation of the nasal spray reported last year went on to participate in an open-label extension study aimed at showing how it performs against recurrent PSVT episodes over many months.

Intranasal application of the spray, which contains the nondihydropyridine CCB etripamil (Milestone Pharmaceuticals), was followed by PSVT termination within 30 minutes in more than half of cases. The arrhythmia converted within 60 minutes in three-fourths of episodes. The median time to conversion was about 15 minutes in the study, called NODE-302.

That’s faster than has generally been observed for oral CCBs and other meds taken by patients following a pill-in-the-pocket strategy for PSVT, say NODE-302 researchers. They add that such self-administered etripamil could potentially avert some of the many emergency department (ED) visits made by patients with PSVT.

Of the study’s 188 episodes adjudicated to be PSVT, 8.5% were ultimately handled by some form of medical intervention other than the nasal spray, usually intravenous adenosine in the ED. That occurred in about 13% of the 92 patients who used intranasal etripamil at least once, reported James E. Ip, MD, Weill Cornell Medical Center, New York City, on April 30 at the Heart Rhythm Society (HRS) 2022 Scientific Sessions, held virtually and live in San Francisco.

The findings, combined with preceding studies of intranasal etripamil for PSVT, he said, support a possible role for the strategy in self-management of the arrhythmia by patients as needed for recurrent episodes.

The etripamil nasal spray might be most suitable for patients with recurrent symptomatic PSVT who should or want to avoid invasive therapy of the arrhythmia, Ip told theheart.org | Medscape Cardiology. Some patients would prefer the arrhythmia be definitively treated by catheter ablation, and others might be poor ablation candidates or “don’t want to have a procedure that has some risk,” he observed.

“I would want to make sure that an electrophysiologist was involved” in that doctor–patient conversation, Jodie L. Hurwitz, MD, North Texas Heart Center, Dallas, who isn’t connected with NODE-302 or the related studies, told theheart.org | Medscape Cardiology.

Catheter ablation for PSVT has such a high success rate that she’d want to ensure the patient understands that with the nasal spray, “we’re preventing them from having to go to the emergency room, but we’re not ultimately treating their underlying arrhythmia.”

Hurwitz observed that patients with PSVT or atrial fibrillation under consideration for a pill-in-the-pocket approach almost always receive their first dose in the office or clinic under supervision, in case there are adverse effects that need to be managed. The patients in NODE-302, she noted, had originally been required to do much the same with the etripamil spray.

Entry to the placebo-controlled trial that provided the extension study’s patients called for them to take an initial test dose under clinical supervision without experiencing bradycardia, a substantial drop in blood pressure, significant heart block, or ventricular arrhythmias, Ip reported.

But should intranasal etripamil ever be approved for self-dosing, Hurwitz speculated, first-dose clinical supervision might not be needed if real-world experience were to confirm the strategy’s safety.

Of the 198 patients who completed the placebo-controlled NODE-301 trial, 169 enrolled in the open-label, observational NODE-302 extension study. The protocol called for them to engage an ambulatory monitoring device once they sensed an episode of PSVT, to attempt a Valsalva maneuver before reaching for the nasal spray, and to continue the monitoring for 5 hours after the treatment.

About 56% of the patients used the etripamil nasal spray for one adjudicated PSVT episode; about 16% and 15% did so for two and three such episodes, respectively, and one patient used the spray for 10 adjudicated episodes.

The median time from spray administration to conversion of an adjudicated PSVT event, the primary endpoint, was 21.1 minutes for a first treated episode and 13.7 minutes for a second such episode.

Kaplan-Meier curves indicated conversion rates of 53.4% at 30 minutes and 71.6% at 60 minutes for a first adjudicated and treated PSVT episode, and 63.2% and 71.1%, respectively, for a second such episode.

There were no serious adverse cardiac events during the follow-up of up to 19 months, nor were there cases of syncope, symptoms of hypotension, or atrioventricular block after successful conversion of PSVT to sinus rhythm, Ip reported.

Other adverse events on days the spray was used occurred in 45% of patients, but tended to be “mild, local, and transient,” he said. They consisted mostly of runny noses or congestion or other nasal discomfort. The etripamil in the nasal spray is carried by an acetic acid solution.

“I think this is going to be a fairly widely used approach,” proposed Gregory Feld, MD, University of California, San Diego, who was invited to comment on NODE-302 after Ip’s presentation at the HRS sessions.

The intranasal etripamil preparation, he said, seems to be “faster in onset with relatively few side effects,” compared with other meds used in pill form for PSVT conversion, which can include conventional CCBs or beta blockers and some antiarrhythmics.

“Before we end up putting somebody on daily therapy or doing an ablation, they may use this and be happy with it if they have a few episodes a year.” And if they’re able to administer it at home without heading for the ED, said Fell, it could potentially help alleviate some of the pressure in crowded emergency departments.