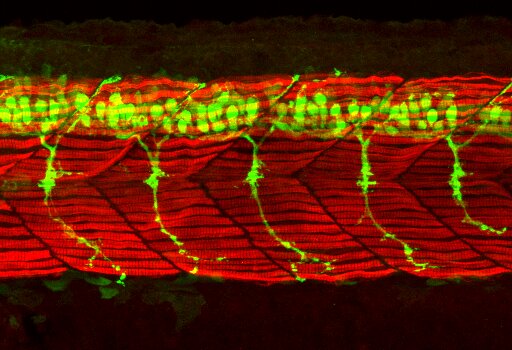 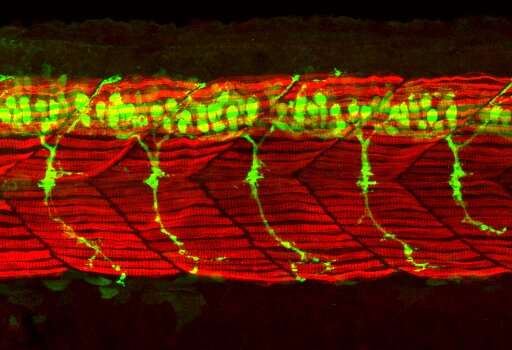 A discovery that may improve treatment options for patients with neurodegenerative diseases has been made by scientists at King’s College London and the University of Bath.

This finding centers on a molecule that plays a profound role in nerve cell development, and which is known to contribute to disease when it malfunctions. Previously it was thought that this molecule was limited to the nucleus of the cell (the organelle containing a cell’s DNA and separated from the rest of the cell by a membrane) but this new study confirms an earlier finding by the same team that it can also be found in the cytoplasm (the watery interior of a cell).

The study also demonstrates for the first time that the cytoplasmic pool of this protein is functionally active.

This finding has important implications for research into neurodegenerative disorders such as Alzheimer’s and motor neuron disease.

The discovery, described in Current Biology was made by Professor Corinne Houart at King’s College London working with Dr. Nikolas Nikolaou from the Department of Life Sciences at Bath.

Scientists have known for some time that splicing proteins—the molecules studied in this research—can sometimes aggregate and form insoluble complexes in the cell’s cytoplasm, and that these complexes can interfere with the function of a neuron (nerve cell), eventually causing the neuron to lose function and degenerate. However, this study is the first to show that a major splicing protein can be found within protein/messenger RNA complexes (known as RNA granules), within the axons of nerve cells.

Axons are the long projections that conduct electrical impulses away from the nerve cell body, connecting neurons with neighboring neurons or transmitting information from neurons to tissue in the body (say, muscle or skin). Axon dysfunction is known to be the cause of many progressive neurological disorders, so the discovery of splicing proteins in this part of the nerve cell hints at the mechanism that could give rise to disease.

The researchers found that the splicing protein SNRNP70 binds to, and subsequently shapes, strands of messenger RNA (mRNA). These strands carry genetic information from the DNA in a cell’s nucleus to the cell’s cytoplasm. The information carried by mRNA is used to create further proteins, the building blocks of life. The team also discovered that the splicing protein is needed in order for mRNA to move from the nerve cell body along axons to more peripheral parts of a neuron.

Commenting on this research, which uses zebrafish as a genetic model system, Dr. Nikolaou said, “When we interfered with the function of the splicing protein, we saw motor neurons didn’t form well. They failed to establish connections where they should have, and they lost other important connections. This sort of behavior is also observed in human neurodegeneration. However, when SNRNP70 was re-introduced only in the cytoplasm and axons of these neurons, it was sufficient to restore motor connectivity and neuronal function once again.”

Despite being a small freshwater fish, zebrafish are a species with a nervous system that is remarkably similar to that found in humans.

In the next phase of this research, Dr. Nikolaou plans to explore the precise function of this protein in axons. “We know that proteins interact with other proteins, so what proteins is this molecule interacting with? And what happens when we remove these complexes from the cytoplasm—how does this affect neuron function?”

He added, “Now we know these types of molecules have a function outside the nucleus, we will need to approach neurodegeneration from a different angle, asking ourselves how these disease-causing aggregates interfere with the function of these proteins not only in the nucleus but also in the cytoplasm, and what role they play in the breakdown of neurons. This is something that hasn’t been thought about before.”