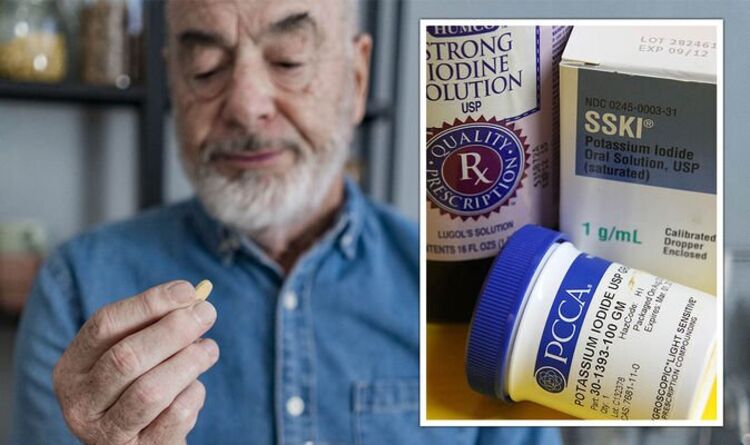 Western officials, noting Putin’s campaign has stalled in Ukraine, fear a potential stalemate could push the Russian premier into desperation. He has already put his country’s nuclear deterrent on alert and could launch tactical weapons at a moment’s notice. The climate of fear in Western Europe will push some people to take precautions against the possibility – which may include buying iodine pills.

How do you buy iodine tablets?

Nuclear war is most likely to destroy the planet several times over, given the nearly 10,000 warheads available between the US and Russia alone.

On the off chance that a smaller-scale conflict leaves the world intact but polluted with radiation, people will require protection.

During a nuclear event, radiation sources may eject the radioactive counterpart, which enters the body via the lungs before processing by the thyroid.

KI protects the thyroid from the ill effects of radioactive iodine, preventing conditions like thyroid cancer, and should never be taken without advice from a health professional.

Supplement providers in the UK sell iodine in 150mg tablets, with many now hit with a flood of demand.

Much of the interest has come from Europe, primarily countries closer to the conflict’s front lines.

Other online sellers in the UK have run out of stock as panicked Britons follow their lead.

But those stocking up on the pill may find their efforts go wasted.

Is iodine effective protection against radiation?

KI tablets only work on the thyroid and protect against a single radiation type.

They won’t prevent damage from other, potentially more dangerous radionuclides cast into the air during a nuclear event.

Significant concentrations of radioiodine requiring tablets will only come following nuclear weapon detonation or an incident at a nuclear plant.

In the event of either of these, there are a host of deadlier risks people will need to consider first.

At the same time, the tablets aren’t iron-clad protection against radioiodine.

They help reduce the chances of thyroid damage rather than eliminating them.