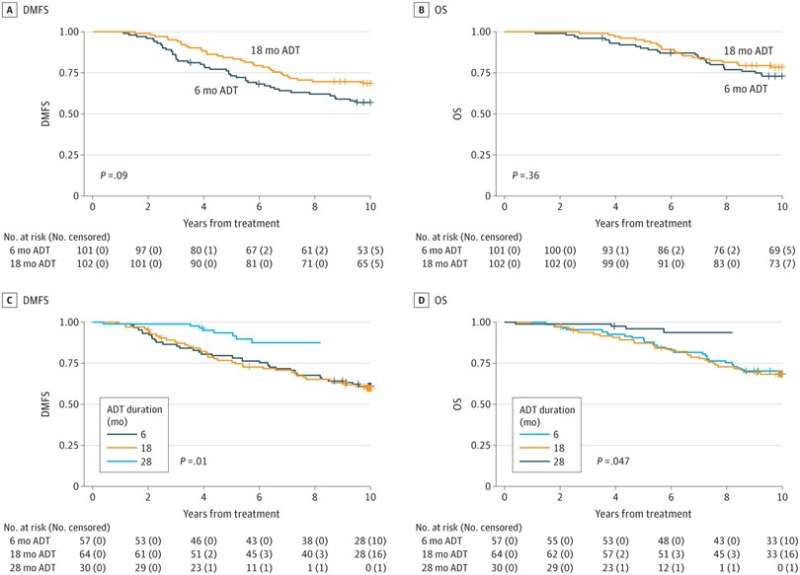 The use of androgen deprivation therapy (ADT) combined with radiation therapy improves cancer outcomes, but comes with significant side effects including effects on the cardiovascular system, mood, lowered libido and loss of muscle mass. This forces clinicians and patients to weight benefits versus costs for use and duration of treatment with ADT, according to Ashley Ross, MD, Ph.D., associate professor of Urology and a co-author of the study.

“Determining the optimal balance for length of therapy is paramount,” said Ross, who is also a member of the Robert H. Lurie Comprehensive Cancer Center of Northwestern University.

High-risk prostate cancer is disease with the ability to progress and spread outside of the prostate. When clinically localized prostate cancer is treated with radiation, ADT, which cuts off the androgens that prostate cancer relies on, should be employed to optimize the treatment, according to Ross. Current guidelines suggest 18 to 36 months of ADT, but given its adverse effects, it’s commonly administered in shorter durations than indicated. In the current study, investigators sought to determine minimum thresholds of effectiveness as measured by improved survival among patients with high-risk prostate cancer.

The study included one retrospective cohort and two trial cohorts, totaling more than 3,400 patients. The retrospective cohort was assembled by querying databases for patients who received ADT alongside radiotherapy, and the trial cohorts were two studies in which patients were randomized to receive varying durations of ADT alongside radiotherapy, ranging from 4 to 28 months. Patients who received radiation received therapy either with external beam radiation therapy (EBRT) alone or with external beam radiation combined with brachytherapy (seed implants).

Longer durations of ADT were associated with increased survival: Patients receiving EBRT alongside ADT for 28 months had improved survival compared with patients receiving ADT for just 18 months. This can be modified by additional therapies, according to Ross, as patients also undergoing brachytherapy may only need 12 months of ADT to see benefit. However, for other patients, 18 months should be the floor and roughly two years of therapy is preferred.