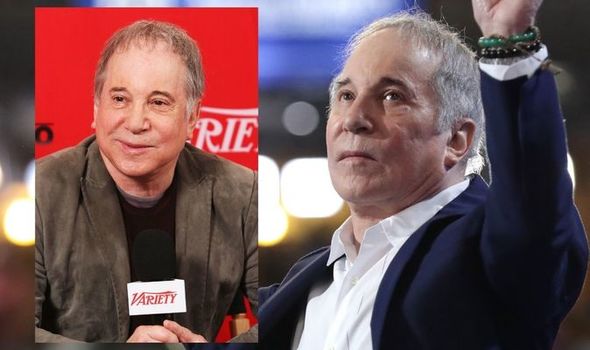 With song titles such as Bridge Over Troubled Water and The Sound of Silence fans would be forgiven for thinking that they were a sneak peak into the mental health of Paul and Art. In 1970 in front of a crowd of 14,400 the pair announced their last concert as a dedicated team. The split came as a shock to fans, with Paul and Art not even talking properly about going their separate ways. Paul said: With Artie, there was no reason to talk about it. When he agreed to make Carnal Knowledge, something was broken between us… I just wanted to move on. We were finished!’”

In the mid-1980s Paul revealed that he was suffering from “great depression”, but in a later interview the star revealed that surprisingly he had felt it in the early Simon and Garfunkel times too.

In an interview with Playboy the singer said: “I’d say early Simon and Garfunkel times. That’s when I started to experience it. In 1966, ’67. By ’69, it got so serious that I stopped smoking dope.

“I said ‘This isn’t helping; it’s making things worse.’ So I didn’t smoke another joint for 11 years.”

When asked the question what made him feel depressed the star was reluctant to give any answers. But eventually continued to say: “They were feelings about myself that were very negative.

“Most people could look at me and wonder, How could that guy be depressed? And I now feel that people were seeing a more accurate picture of me than I was. I eventually realized, Jesus, all I’ve been looking at is this thin slice of pie that has got the bad news in it. And I’m disregarding the rest of the picture.”

Like many who find fame, the pressures of being in the limelight come with a lot of negativity and this can be extremely hard to deal with.

Paul went on to explain that “bad news” or things that he didn’t like about himself would manifest and deteriorate his mental health. These included being short or “not having the voice that you want” and his extremely public 12 year long marriage with Carrie Fisher breaking down.

“If you start to roll it together, that’s what you focus on. I was unable, fundamental, to absorb the bounty that was in my life,” Paul said.

“Even when people would say – a simple statement that I used to hear countless times – “Hey, man, I love your music,” you’d think that I’d begin to feel something good about my music, right? But that’s a statement I would ignore. Totally ignore it.

“There’s something in me – in a lot of people – that says, ‘Gee, if I admit that things are actually going well, maybe they’ll stop.’ Or ‘If I admit I’m happy, maybe I won’t be able to write.’ I think the psyche comes up with all kinds of contrivances to protect what it thinks is vulnerable.

“And sometimes those contrivances are that you stay in a state of unhappiness. Or victimization. It’s almost saying, ‘Hey, don’t get mad at me for being so successful and doing so well, because look how unhappy I am.’”

The raw interview revealed how Paul suffered with major insecurities about himself that led to him ultimately not being able to enjoy fame or success as much as he should have been able to.

Speaking more on why he felt disappointed with his physical height he said: “I think it had the most significant single effect on my existence, aside from my brain. In fact, it’s part of an inferior-superior syndrome. I think I have a superior brain and an inferior stature, if you really want to get brutal about it.”

In order to try and alleviate and change his opinion of himself, Paul lost weight and changed his hair. Taking an interest in his physical appearance was something that he called “a healthy statement.”

Everyday Health describes an inferiority complex as a mental health condition. Sometimes known as chronic low self-esteem, individuals often feel disappointed in themselves as this disappointment grows, you become depressed.

Cognitive behavioural therapist Amy Flowers, PhD from Georgia said: “ As disappointments mount, you become more discouraged and more vulnerable to being biased against yourself. The result is a pervasive feeling of being ‘less than’ across most aspects of life: psychological, intellectual, social, and physical.”

Symptoms and signs that you may be suffering from chronic low self-esteem include the following:

Having these thoughts constantly and left unchallenged can develop into deeper feelings of inadequacy and cause various other symptoms which are linked to clinical depression. These include:

If you find your mental health declining rapidly it is important to speak to a medical professional. The Samaritans suicide prevention hotline is available everyday for 24-hours a day on 116 123.