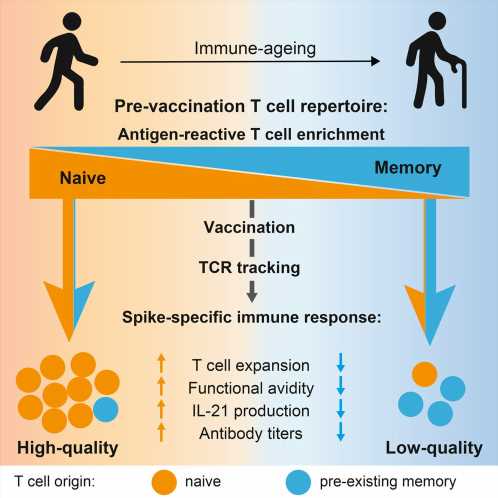 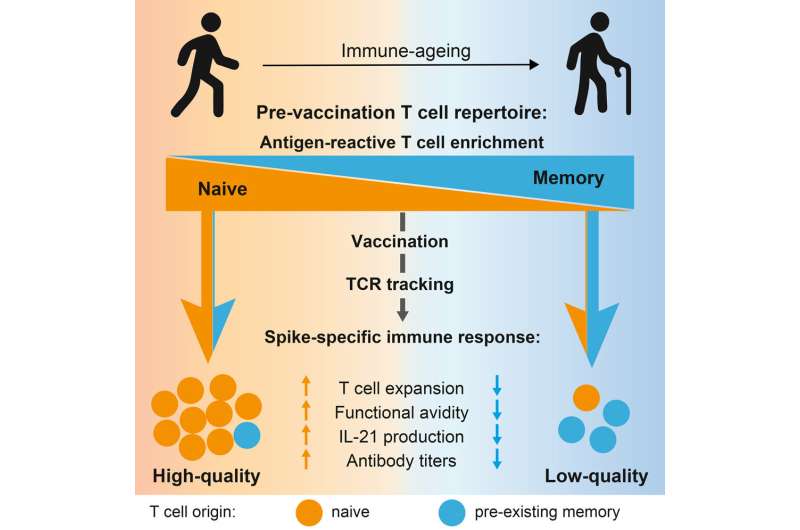 People who have often been infected by common cold viruses—which also belong to the coronaviruses—are not better protected against COVID-19, neither after infection with SARS-CoV-2 nor after vaccination. “We already showed in 2020 that earlier exposure to common cold viruses does not provide protection against COVID-19. In a follow-up study, we have now been able to show that this is also not beneficial for the quality of the vaccine response,” explains Professor Petra Bacher from the Institute of Immunology at Kiel University (CAU) and the University Medical Center Schleswig-Holstein (UKSH), Campus Kiel.

Together with Professor Alexander Scheffold, Head of the Institute of Immunology, and colleagues from the Cluster of Excellence “Precision Medicine in Chronic Inflammation” (PMI) in Kiel, the immunologist analyzed blood samples from healthy people before and after they received the SARS-CoV-2 vaccination. The results of the study have now been published in Immunity. “A good immune response comes from the naïve T cell repertoire. Pre-existing memory T cells that recognize SARS-CoV-2 rather have a negative effect,” note the researchers. This could explain why the immune response in the elderly is often worse after infection or vaccination.

What makes a good vaccine response?

T cells, more precisely T helper cells, are the central organizers of immune responses. Each T cell recognizes a specific pathogen via its “T cell receptor.” Naive T cells have not yet had any contact with a pathogen. During an infection or vaccination, only the pathogen-specific T cells are activated and can transform into memory cells. These memory cells provide a rapid immune reaction upon repeated contact with the pathogen—the principle of vaccination. However, also in the blood of people who are neither vaccinated nor have been infected, memory cells can be found that can react to SARS-CoV-2 but that originate from infections with other pathogens. This is a phenomenon called cross-reactivity, which was previously thought to be protective.

“We wondered whether memory cells that have already reacted to a pathogen similar to SARS-CoV-2, such as a cold virus, actually improved the response to the SARS-CoV-2 vaccination. Or whether it is more important to have many naive cells against SARS-CoV-2 that could adapt specifically to the new pathogen. This is typically the case in young people, who usually cope well with infections and vaccinations,” explains Professor Bacher, who received the Dorothea Erxleben Female Investigator Award 2021 from the Cluster of Excellence PMI and invested the prize money in this project.

For the current study, the blood of 50 healthy individuals was analyzed before they received the corona vaccination and several weeks after the first and second vaccinations. Previous infection with COVID-19 was excluded. Using a special technique called antigen-reactive T-cell enrichment, it is possible to analyze very specifically those cells that react to the vaccine.

“We sort out the cells that react to SARS-CoV-2 because only they determine the immune response. By analyzing the T cell receptor, an identifier of an individual T cell and its progeny, we can then determine whether the cells came from the naive repertoire or from the memory repertoire,” says Bacher. The results of this analysis were correlated to the quality of the vaccine response.

Vaccination success not so good in the elderly

According to Professor Bacher, the result of the study was that “pre-existing memory T cells do not contribute to a high-quality immune response. Rather the opposite. A very good immune response comes from the naive repertoire.” Participants over 80 years showed an overall weaker vaccine response. In their cases, the vaccination resulted in only a slight increase of SARS-CoV-2-specific T cells. “We showed that in the eldery, the few naive T cells that remain, can no longer be activated as well. But also the strong presence of pre-existing memory cells does not contribute positively to the vaccine response in the elderly.”

This defect in older people’s immune systems can be alleviated with further booster vaccinations, but it cannot be fully compensated. Despite vaccination, very old people remain a vulnerable group. “We need to be aware that there is still a group that is at risk. This affects mainly the elderly, whose immune systems cannot cope well with this ‘new’ pathogen. But also among young people there are some with poor vaccination response. This is also evident from the fact that, despite being vaccinated, serious cases are still occurring,” adds Alexander Scheffold.

How well and how long the vaccination protects against SARS-CoV-2 in individual cases can still not be reliably determined by blood tests. The measurement of specific antibodies against the pathogen is not conclusive because we do not know yet at what level sufficient immune protection is given. “There are no clear thresholds in the immune system. Which factor is decisive can vary from person to person. Overall, many parameters contribute to protection against infection, in addition to antibodies, in particular the T cells,” says Bacher.