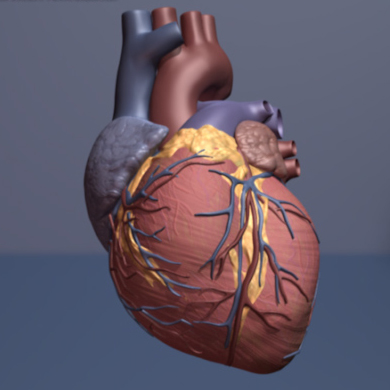 A team including Wei Liu, assistant professor in ASU’s School of Molecular Sciences (SMS) and the Biodesign Institute’s Center for Applied Structural Discovery, has published a paper today in Molecular Cell that offers promising details for improved therapeutic treatments for cardiac disease.

Cardiac disease is the number one killer of people worldwide and according to the US Centers for Disease Control (CDC) it kills one person every 37 seconds in the United States.

With this in mind, the team decided to conduct structural and functional studies using cryo electron microscopy (EM) to capture never-before-seen detailed conformational changes involving the β1-adrenergic receptor (β1-AR) in complex with the Gs protein. The β1-adrenergic receptor is a member of the G protein-coupled receptor (GPCR) family. GPCRs are the largest class of membrane proteins in the human genome.

Downregulation of β1-ARs has been seen as the cause of most cases of heart failure, one of the leading causes of morbidity worldwide. Beta-blockers, which are inhibitors of β1-ARs, are used to treat high blood pressure and heart failure, to manage abnormal heart rhythms, and to protect against myocardial infarction.

“In this Molecular Cell paper, we employed cryo-electron microscopy and signaling studies to investigate the molecular mechanism by which β1-AR catalyzes the guanine-nucleotide exchange as the result of Gs activation” says Wei Liu.

“We have captured never-before-seen details of the conformational changes during the Gs activation by isoproterenol-bound β1-AR. Activated β1-AR, serving as a guanine-nucleotide exchange factor (GEF) for Gs, deforms the GDP-binding pocket and induces a tilting of the C-terminal α5-helix and the α-helical domain of Gs rotational opening away from its Ras-like domain,” explains Lan Zhu, Assistant Research Scientist in SMS and Biodesign Center for Applied Structural Discovery and one of four co-first authors of this paper.

The other first authors include Minfei Su of Cornell University, Yixiao Zhang of The Rockerfeller University and Navid Paknejad of Memorial Sloan Kettering Cancer Center.

“This structure of the adrenergic receptor complex with the effector G-protein reveals molecular details in the protein-protein interaction domains involved in the receptor activation,” explains Liu. “This information allows for the design of new precision therapeutics to target cardiac diseases, one of the leading causes of death in the developed world.”

In the past few years, single-particle cryogenic electron microscopy (cryo-EM) in particular has triggered a revolution in structural biology and has become a newly dominant discipline. Cryo-EM allows researchers to take a look at biological structures that were simply not accessible just a few years ago and is now exposing structures of unprecedented complexity in great detail.

Indeed, it is this technique utilized by the experts in the School of Molecular Sciences and the John M. Cowley Center for High Resolution Electron Microscopy in the College of Liberal Arts and Sciences at ASU that has enabled the current research.

“Wei Liu’s work is typified by outstanding scholarship and a relentless commitment to making critical advances that will benefit science and society at large,” said Ian Gould, interim director of the School of Molecular Sciences.