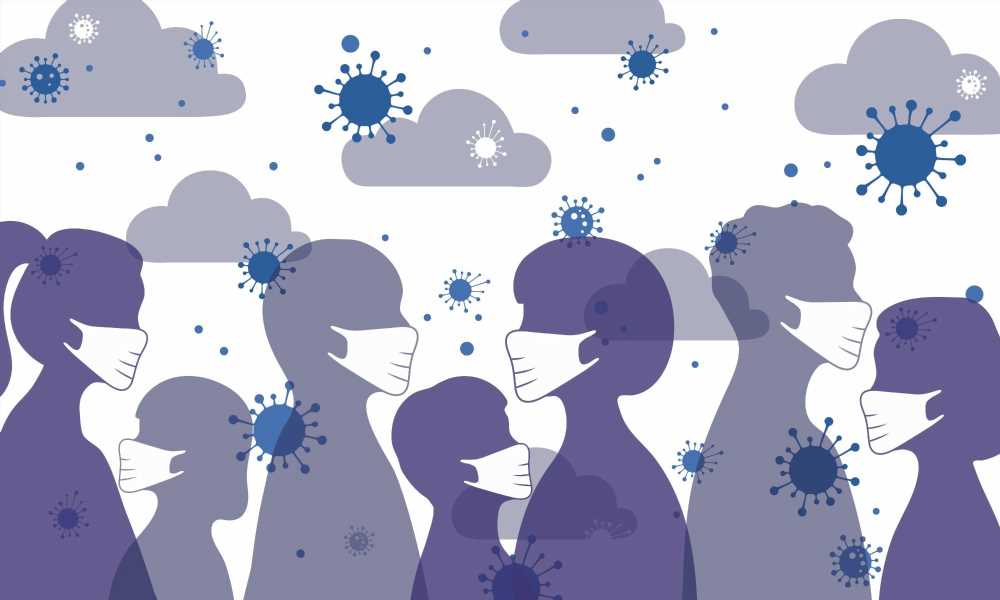 In a recent study published in Indoor Air, researchers extensively searched for the origins of the resistance to recognizing airborne transmission during the coronavirus disease 2019 (COVID-19) pandemic by major public health organizations, including the World Health Organization (WHO) and the United States Centers of Disease Control and Prevention (US-CDC).

Earlier acceptance of the evidence of airborne transmission of severe acute respiratory syndrome coronavirus 2 (SARS-CoV-2) would have reduced the effort, time, and money wasted on adhering to the use of interventions, such as surface disinfection and lateral plexiglass barriers, which were ineffective in containing COVID-19. Subsequently, the general public would have focused on ventilation, filtration, and mask use, with better fit and filters, even indoors where social distancing was feasible.

Partly, the WHO and CDC were hesitant to adopt the airborne transmission of SARS-CoV-2 even in the face of evidence due to a conceptual error that occurred over a century ago and became embedded in the public health, epidemiology, and infection prevention fields.

In the present study, researchers studied historical theories of disease transmission from ancient times to the present day and relevant literature in PubMed, Google Scholar, and Web of Science to highlight the key trends that led to the adoption of the droplet theory of disease transmission. Additionally, they consulted with experts to identify other relevant papers on these topics. Further, the team performed backward tracking to pursue references of those papers and tracked the source forward in Google Scholar to see which other sources cited it using forward tracking.

Furthermore, the researchers used hermeneutic methods to develop a narrative of the identified literature and showcase how scientists originally conceptualized the transmission of some diseases; and what empirical evidence led scientists to revise those models. They refined their interpretation by searching for disconfirming studies that challenge prevailing disease models and assumptions.

Hippocratic writings in ancient Greece first proposed that miasmas (or bad air) transmit through the air to cause mass epidemics. Marcus Terentius Varro, a Roman Scholar, proposed that swamps bred minute creatures that floated in the air and entered the human body through the mouth and nose to cause serious diseases. Regardless of the mode of transmission – bad air or minute creatures – historically, airborne infections were generally not viewed as contagious and transmissible from human to human. In fact, establishing transmission modes was difficult for scientific and sociological reasons. Plus, without microscopes and a germ theory of disease, it was difficult to distinguish among various possible transmission modes.

Girolamo Fracastoro, in 1546, formulated the theory of human-to-human disease transmission. He proposed that the seeds of disease-causing 'contagion' or 'seminaria' transmit through three modes: direct, indirect, and at a distance. Contagion, which he thought was a chemical, was the strongest at a distance. Around 50 years later, Hans and Zacharias Janssen invented the microscope in 1590, which led to the discovery of microorganisms, the real contagions.

During the 1854 cholera epidemic of London, John Snow noticed how cases had clustered in a specific London borough. He persuaded the local authorities to remove the Broad Street water pump handle to cease the epidemic. Ignaz Semmelweis, another pioneer of disease transmission, showed that handwashing reduced deaths by childbed fever in a maternity clinic.

In 1861, Pasteur conducted experiments to show the presence of viable microorganisms in the air. However, only by the late 1880s did miasma theory wane in popularity. The discovery of microorganisms as disease agents did not eliminate the challenge of definitively determining the mode by which they were transmitted between humans.

In yet another example of the complexities related to inferring disease transmission modes, most experts believed that tuberculosis was transmitted when the dust of dried sputum that had landed on the floor or other contaminated objects dispersed into the air. In reality, fresh secretions from the skin of the patients that floated in the air caused tuberculosis. Flügge and collaborators were the first to use the term droplet to refer to fresh air particles of all sizes, including aerosols.

In 1905, microbiologist M.H. Gordon studied the atmospheric hygiene of the UK House of Commons after an influenza epidemic among the members. He successfully investigated the spatial reach of pathogen-containing aerosols and droplets. Although there were far more bacterial colonies on the plates near the speaker, cultures were apparent on some plates as far as 21 meters away. He could make no further progress due to the unavailability of better experimental techniques at the time.

Renowned American epidemiologist Charles V. Chapin first conceptualized contact infection, i.e., the infection that did not come from the environment but other humans directly or through proximity. It was the turning point in the history of airborne disease transmission. Chapin conceived of airborne infections as infections from afar, and his ideas and unproven hypothesis became accepted as proof of droplet transmission. This error remained ingrained for the years to come, even at the start of the COVID-19 pandemic.

Although a few public health announcements in China early in the COVID-19 pandemic reported that SARS-CoV-2 was airborne, an article published in Nature concluded that "the disease could be transmitted by airborne transmission, although we cannot rule out other possible routes of transmission." Despite a lack of evidence supporting droplet or fomite modes of SARS-CoV-2 transmission, the WHO concluded that COVID-19 was transmitted by those mechanisms, continuing Chapin's error.

Aerosol generating procedures (AGPs) were the only circumstance in which WHO accepted airborne transmission; consequently, WHO did not amend this misguided concept till January 2022. The WHO and other public health organizations worldwide ignored the airborne transmission mode of SARS-CoV-2 for almost a year. They remained entrenched in the old droplet paradigm and continued to ignore the 70 years of delay in recognizing measles and chickenpox as airborne, and that pulmonary tuberculosis was exclusively airborne and yet less infectious than COVID-19.

Multiple studies during the COVID-19 pandemic showed that patients produced more aerosols through breathing, talking, and coughing, which required precaution, but the WHO continued to emphasize AGPs. Accumulating evidence that COVID-19 is a predominantly airborne disease made clear that it was a logical error to try to control the pandemic through only droplet/fomite measures such as physical distance, handwashing, and surface disinfection.

Studies published multiple cases of long-range airborne transmission, such as in quarantine hotels. Likewise, there were COVID-19 cases in hospitals despite surgical masks and eye protection and between patients sharing a room despite physical barriers. It was only by May 2021, that the WHO and CDC partially accepted airborne transmission of SARS-CoV-2. However, as of January 2022, despite the acceptance, it received insufficient publicity, and changes in the mitigation measures only partially reached most of the world.

The five-micron error and its implications

Aerosols or inhalable particles need to be smaller than ~100 μm to travel beyond the proximity of the infected person. Milton first proposed avoiding the ambiguous term droplet and using the terms aerosols for smaller particles (inhalable). July 2020 WHO scientific brief on COVID-19 transmission repeated a long-standing error in previous guidelines and scientific literature. They placed the separation between droplets that fall to the ground at one to two meters and aerosols that remain airborne at five microns. The correct value is of the order of 100 μm, published by Wells in 1934.

The miasmatic paradigm prevailed for two millennia and weakened only following the discovery that several diseases (e.g., cholera, malaria) that had been thought to transmit through the air were, in reality, transmitted by other means and by the acceptance of germ theory. Then, Chapin wrote a book that categorized disease transmission modes, thus incorporating germ theory into the study of disease transmission. The success of his unproven theories led to the paradigm of droplet transmission for all respiratory diseases and set aside airborne transmission as unimportant for disease transmission by the 1930s. Accordingly, in the second half of the 20th century, there was great resistance to accepting diseases as airborne.

The COVID-19 pandemic made the errors inherent in the droplet theory popular again, piloting in a more objective paradigm for airborne transmission. However, the overwhelming dominance of Chapin's paradigm led to a persistent lack of attention to the details of the physics of airborne transmission and the views of aerosol science and occupational medicine experts. Yet, it remains puzzling that the five-micron error persisted and was present in the WHO's latest scientific brief on the SARS-CoV-2 transmission.

The authors of the current review found no reviews (to date) summarizing the evidence supporting droplet transmission, despite WHO stating it as the primary transmission mode of SARS-CoV-2. Fortunately, the intense research and debate associated with the COVID-19 pandemic have finally begun to generate a new paradigm shift for disease transmission. This new paradigm will mandate the regulation and control of air quality in indoor spaces through proper ventilation, filtration, and personal protection equipment (PPE) for healthcare workers and mask use by the general public. The lack of attention to the quality of shared indoor air may finally be remedied in the coming years, potentially leading to a reduction in respiratory disease transmission in the coming years.

Neha is a digital marketing professional based in Gurugram, India. She has a Master’s degree from the University of Rajasthan with a specialization in Biotechnology in 2008. She has experience in pre-clinical research as part of her research project in The Department of Toxicology at the prestigious Central Drug Research Institute (CDRI), Lucknow, India. She also holds a certification in C++ programming.