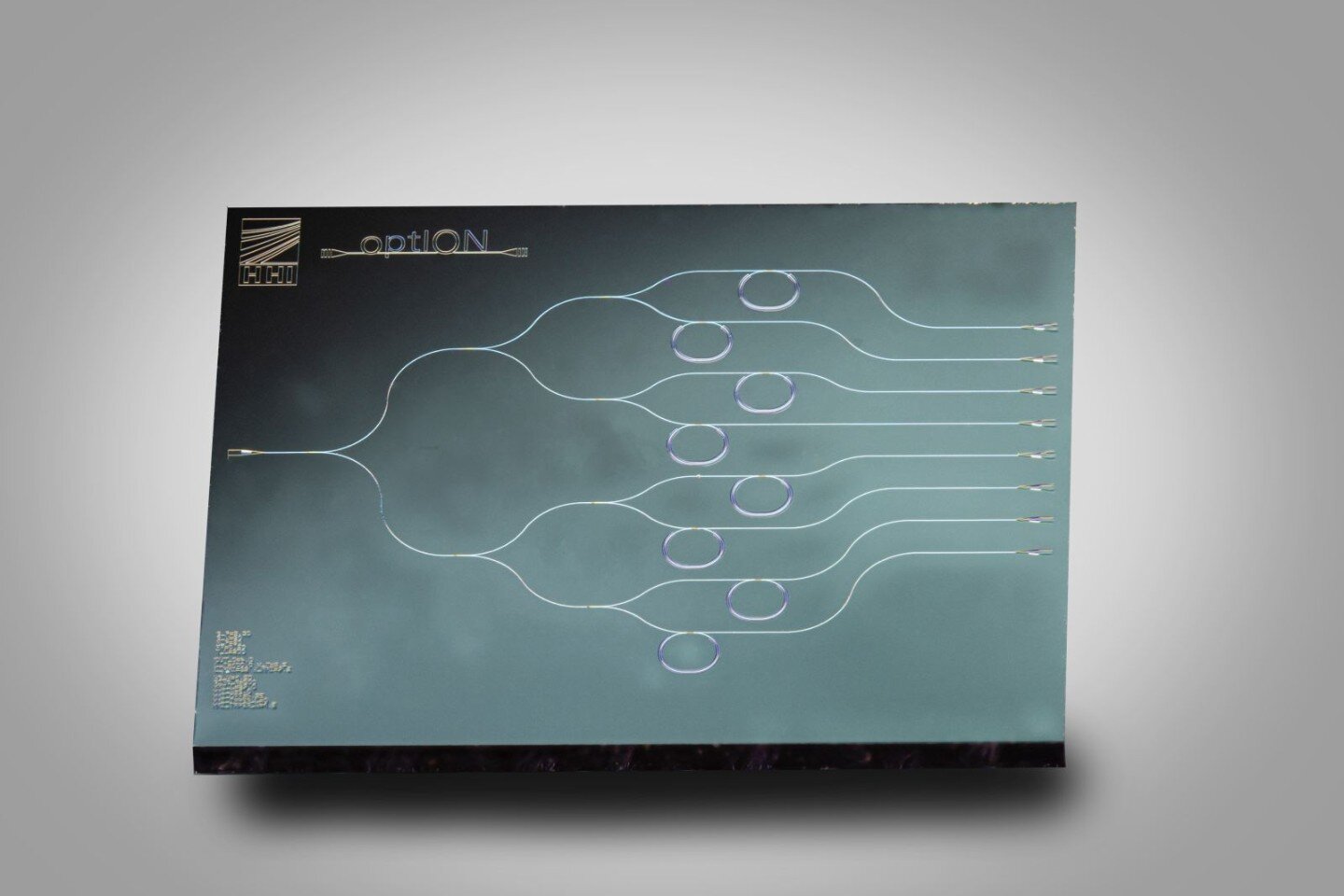 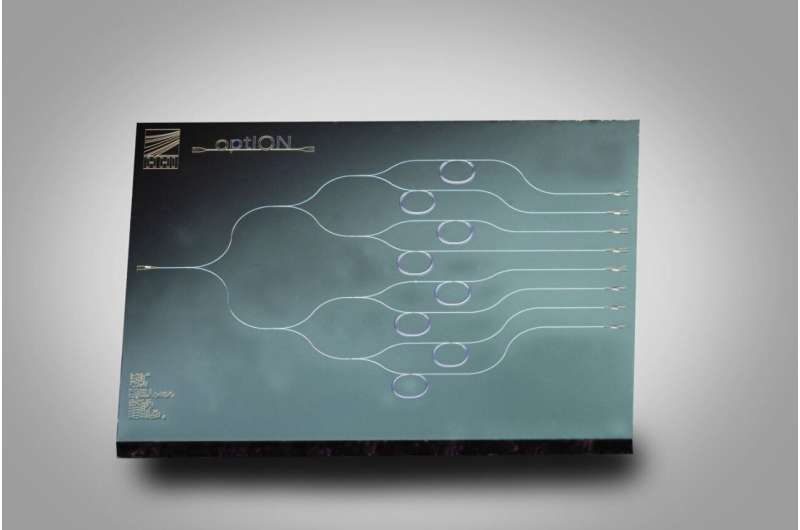 In the human body, electrolytes play a key role in maintaining water balance and distribution of fluids. All charged particles dissolved in the blood interact with each other. If a disturbance to their complex equilibrium is suspected, the concentration of a variety of these microminerals will be analyzed.

Researchers from the Fraunhofer Institute for Telecommunications, Heinrich-Hertz-Institut, HHI and partners from a variety of disciplines have joined forces as part of the optION project. The project goal is to develop a device concept that uses a photonic sensor solution to significantly reduce the amount of blood needed for analysis and make the testing process significantly easier for all those involved.

Whether it’s kidney diseases, heart failure, alcohol poisoning or diabetes mellitus—analyzing electrolyte balance is imperative to the diagnosis of these and many other serious diseases. Its composition is precisely balanced in the respective parts of the body and any changes can have dramatic effects. For example, if your sodium ion concentration is too low, the cells in your brain might start to swell, which could cause a coma.

Today’s measuring devices require separate sensors for each type of electrolyte. A blood sample of around 70 to 80 microliters is needed in order to cover all sensors with blood. The volume of blood that can be taken from small children or elderly patients is often insufficient for this.

To overcome this challenge, teams of specialists in medicine, fluid mechanics, surface chemistry, photonics and electronics from Eschweiler in Kiel, Scienion AG, Charité—Universitätsmedizin Berlin and Fraunhofer HHI teamed up to form the optION consortium. Their goal: to investigate and expedite a new measurement principle in photonics, enabling very small volumes of blood to be analyzed with high precision.

The researchers also had another objective: They wanted to develop a device concept that end users could use to test for a variety of health parameters rapidly, without complications and in a way that is convenient to patients—even in areas that are harder to reach. “Think of it like a simple blood sugar test,” explains project manager Jakob Reck from Fraunhofer HHI. “It takes a prick of the fingertip to produce a droplet of blood, which is enough to immediately determine all of the relevant parameters.”

The experts are using microring resonators as photonic sensors. The highly sensitive integrated silicon nitride waveguides are produced on site in the Fraunhofer HHI cleanrooms. The waveguides form a ring where near-infrared light is able to interact with itself and the environment.

When an analyte accumulates on the ring, this causes a shift in the effective refraction index and optical resonance of the ring. “In principle, the ring goes ‘out of tune’—similar to a guitar string,” explains Reck. “If an analyte interacts with the ring—in other words, the ‘string’—the tone changes. We are able to design these ‘guitar strings’ to be extremely sensitive, resulting in clear signaling and analytics.”

Each of the sensors emits a signal that is specific to a particular electrolyte, guaranteeing the functionalization of the sensor’s surface: To this end, Scienion scientists attached special capture molecules to the ring resonators. Only the specific analyte to be investigated is able to latch onto a ring using the lock-and-key principle and thereby influence the light field on the waveguide.

This change is directly related to the amount of molecules that have accumulated. Even the smallest deviation in the optical characteristics can be measured, which makes it possible to detect even the tiniest amount of a substance with a high degree of accuracy.

For the functionalized photonic sensors, the Biofluid Mechanics Laboratory at Charité—Universitätsmedizin Berlin developed a microfluidics system to transport small quantities of liquid onto the chips in a targeted manner. Several microrings with different coatings can be covered with just one sample. As such, electrolyte concentration can be analyzed using volumes of less than 20 microliters.

Following this, specialists from Eschweiler and Fraunhofer HHI combined sensors and fluidics with control, read-out and evaluation electronics into a demonstrator device whose performance was tested at Fraunhofer HHI and by the Charité Institute of Laboratory Medicine, Clinical Chemis-try and Pathobiochemistry.

These tests speak for themselves: “Our process is highly flexible and very reliable,” says Fraunhofer HHI scientist Reck. “No matter which of the tested parameters we are looking at, we are generally two orders of magnitude above the detection limit required for mainstream tests. We also have a diverse range of options, since the surface of our resonators can be adapted to a large number of analytes.”

Additionally, the consortium’s photonic sensors are very small, allowing for sensitive measurement of tiny volumes as well as the parallel detection of different electrolytes and other biomarkers by multiplexing multiple sensor rings. “We have a fingernail-sized sensor chip that uses eight microring resonators. As such, the process can be highly miniaturized and integrated,” says Reck. Furthermore, the sensor is designed for rapidly recording measurement data in real time so that surface kinetics can be displayed through the binding of the biomolecules.

The current sensor head demonstrator can fit in a shoebox, paving the way to a small handheld device that can be used in a laboratory setting and, as a result, be easily sent into the field. On top of this, it is battery operated and does not need to be connected to the grid, which again makes it easier to use.

Jakob Reck sees its interdisciplinary nature as having added tremendous value to the project—and as a challenge that the consortium members called for from the outset: “The aim was to implement an innovative concept that is needed on the market—with all its individual aspects: from the photonic chips through to the surface functionalization and microfluidics to device integration. The only way for this project to be successful is for the parties involved to be extremely communicative and willing to listen to each other so that they truly understand what is required by each of the other disciplines.”

The results of the research project, which ended in October 2022, are impressive. The successful partners are already planning follow-up projects—they have enough starting points, and market demand is high. As a result, the joint research project Poly-Chrome Berlin kicked off in 2022: Its aim is to develop new applications in sensors and analytics that can be implemented in a cost-effective way. As before, analytics using photonic sensor chips is a significant part of this project, which also involves specialists from Fraunhofer HHI.