England’s GP postcode lottery laid bare: Some areas have HALF number of doctors as others while Portsmouth, Brighton, Essex and Hull have as little as 40 GPs per 100,000 patients

England’s GP postcode lottery was laid bare today as official data showed some areas of the country have half as many doctors per patient as others.

Analysis by the Nuffield Trust thinktank revealed family doctors in the parts of the country with lowest access have 70 or more GPs per 100,000 patients, the equivalent of around one doctor per 1,400 patients.

Yet in areas with the poorest coverage, like Portsmouth, Brighton, Hull and Thurrock, there were around just 40 GPs per 100,000 patients, or one for every 2,500.

Campaigners described the shocking disparities as ‘a serious failing’ by the NHS, which was founded on the ‘principle of equal treatment’.

GPs admitted ‘the number of patients per GP is rising to unsafe and unmanageable levels’, and blamed the differences on staff shortages and increased demand post-pandemic.

It comes after tens of millions of GP appointments were cancelled by the NHS during the pandemic so doctors could focus on Covid.

Many patients are still struggling to see a GP as services fail to bounce back, with less than half of appointments now conducted face-to-face now. 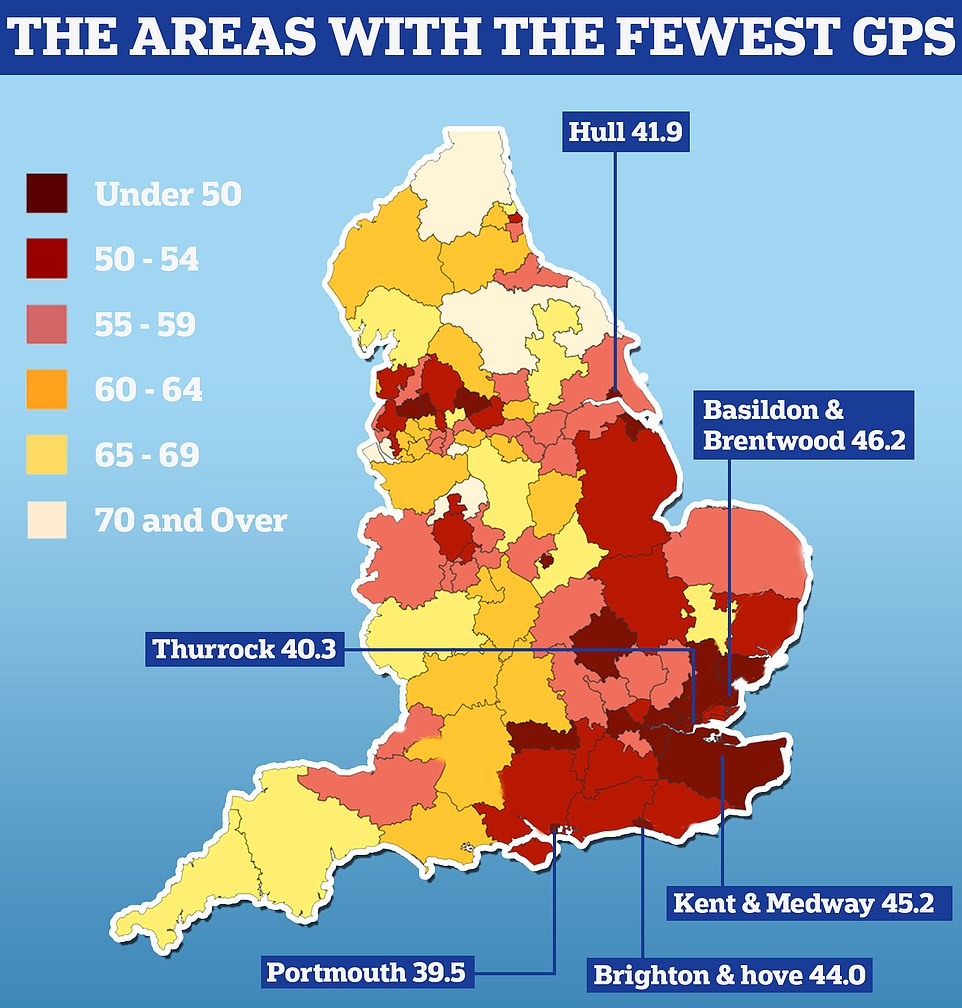 England’s GP postcode lottery was laid bare today as official data showed some areas have half as many doctors per patient as others. Nuffield Trust analysis shows there are 39.5 GPs caring for every 100,000 people in Portsmouth. People in Thurrock have 40.3 family doctors for every 100,000 people in the area and in Hull there are 41.9 per 100,000 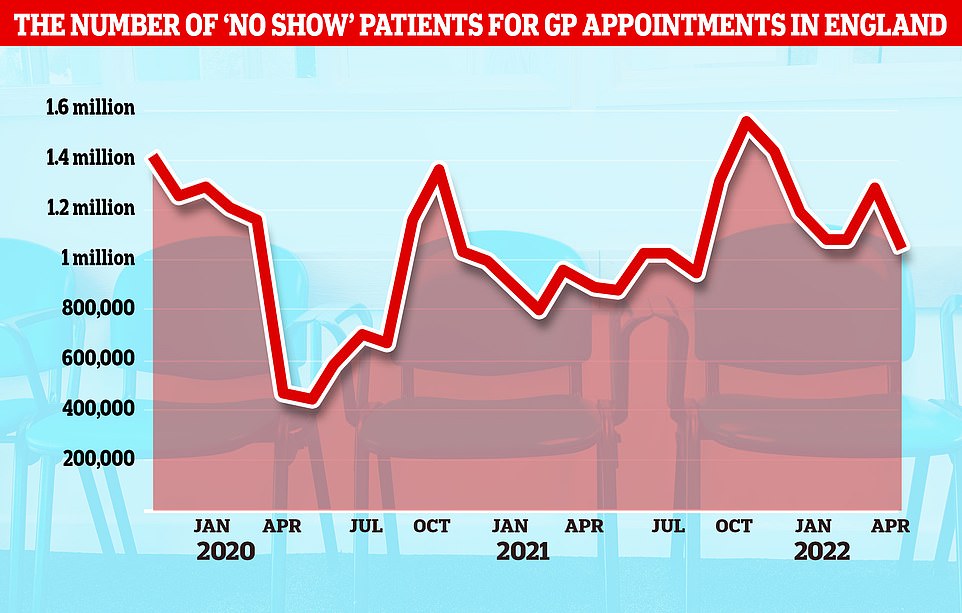 NHS data shows there have been nearly 4.5milion booked GP appointments where patients did not turn up since the start of the year, about 40,000 per day 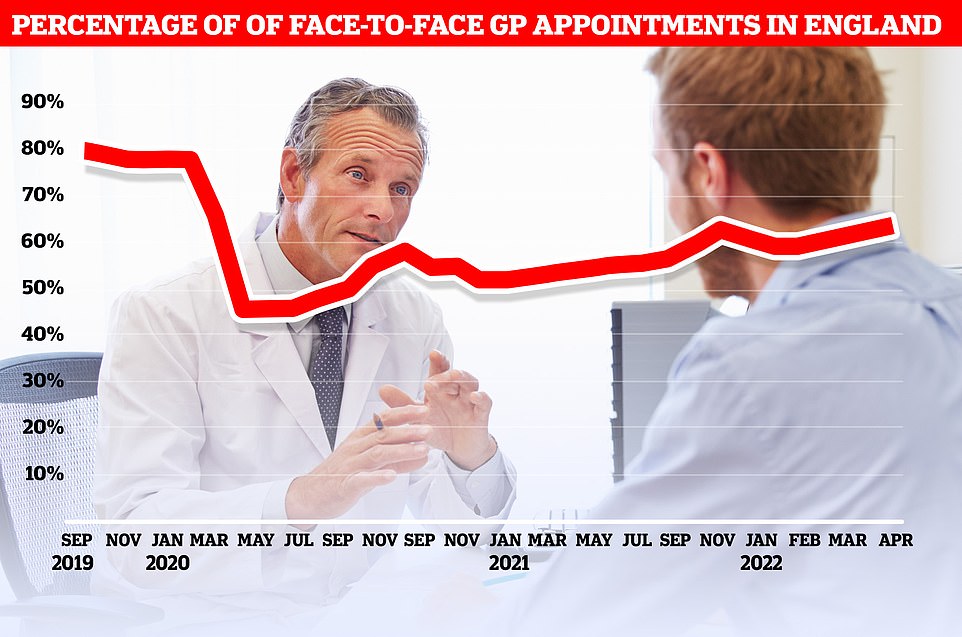 Official figures show just 63 per cent of consultations were carried out in-person in England in April. At the current rate, it would take until September 2023 to reach the more than 80 per cent of appointments being made in person seen before the pandemic 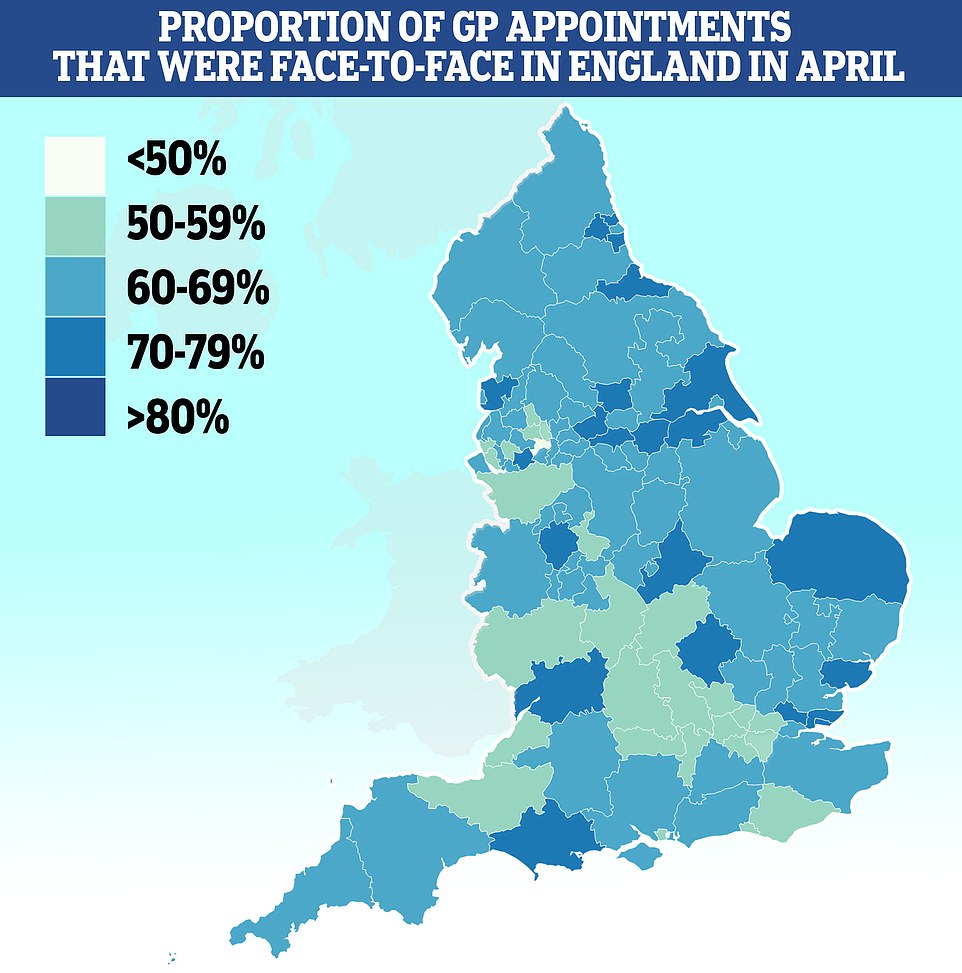 Dr Lisa Nayler, from the Rebuild General Practice campaign, told MailOnline: ‘The data released today from The Nuffield Trust highlights the worrying reality of General Practice today — the number of patients per GP is rising to unsafe and unmanageable levels.

‘The data shows that the crisis is more acute in some regions than others, but the truth is that there is a GP workforce emergency across the whole of Great Britain.

Patients who fail to show up for GP appointments should be fined £10 per missed session, doctors say.

The calls come as NHS data shows there have been nearly 4.5milion appointments in England where patients did not turn up since the start of the year — about 40,000 a day.

With the average GP appointment estimated to cost the NHS £39, this means patient no-shows have cost the taxpayer almost £175million so far in 2022.

It comes after tens of millions of GP appointments were cancelled by the NHS during the pandemic so doctors could focus on Covid.

Many patients are still struggling to see a GP as services fail to bounce back, with less than half of appointments now conducted face-to-face now.

‘There are now on average 2,200 patients for every GP in England and patients are not receiving the safe, quality care they deserve.’

The Nuffield Trust analysis shows there are just 39 practicing GPs caring for every 100,000 people in Portsmouth.

Brighton and Hove has 44 GPs for every 100,000 people, according to the analysis shared with the BBC.

By contrast, people in the Wirral, in Merseyside, enjoy 81 GPs caring for every 100,000 people and in Liverpool there are 78.

Billy Palmer, senior fellow at the Nuffield Trust, said: ‘These disparities mean people in some areas are less able to access their family doctor than people elsewhere.

‘In an NHS founded on the principle of equal treatment, such stark differences represent a serious failing.’

At the current rate, it would take until September 2023 for in-person GP appointments to return to the level before Covid hit, when more than 80 per cent of appointments were face-to-face.

Professor Martin Marshall, chair of the Royal College of GPs, said: ‘The size of the fully qualified GP workforce is falling whilst the number of patients continues to grow — as a result, the ratio of patients to GPs has increased significantly over recent years.

‘Whilst this is happening across the country, some regions are being affected worse than others as they face greater difficulties recruiting new GPs and other staff.

‘GPs want to be able to consistently give their patients the care they deserve, no matter where they live in the country, but the intense workload and workforce pressures facing general practice are unsustainable.

‘The Government urgently needs to make good on its manifesto promise of 6,000 more full time equivalent GPs, and 26,000 more members of the wider team, by 2024.’ 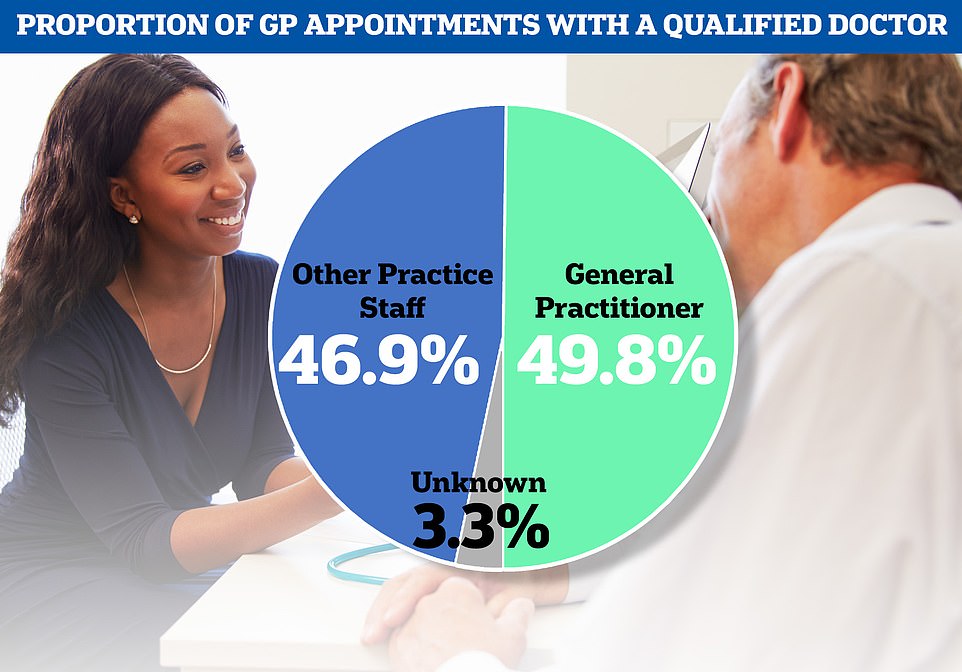 The NHS data also showed just under half of all GP appointments last month were carried out by fully-qualified doctors, with patients seen by other staff including nurses at the rest of appointments 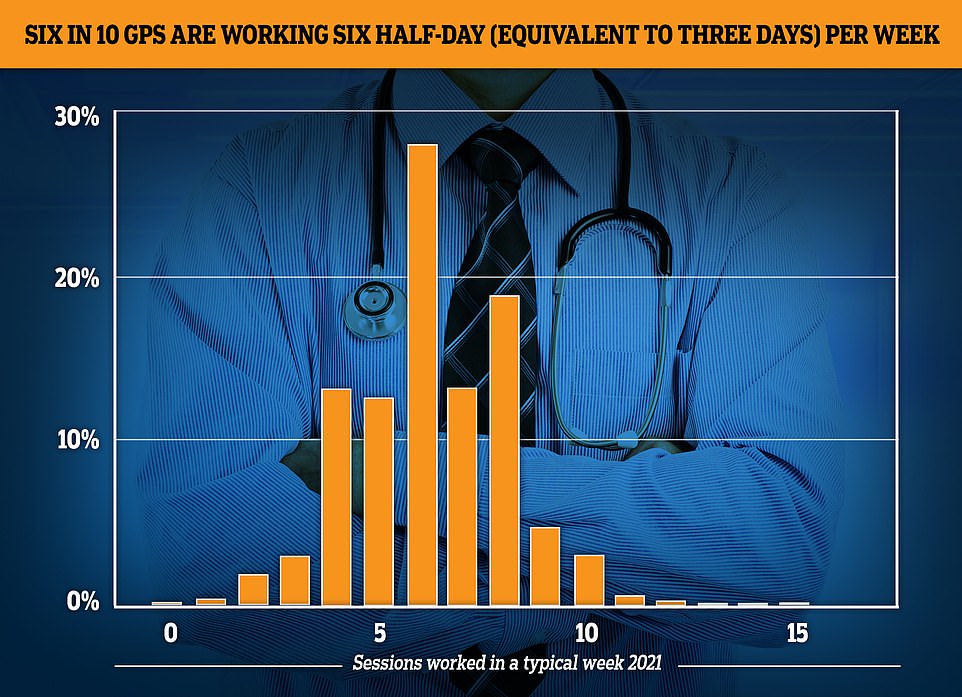 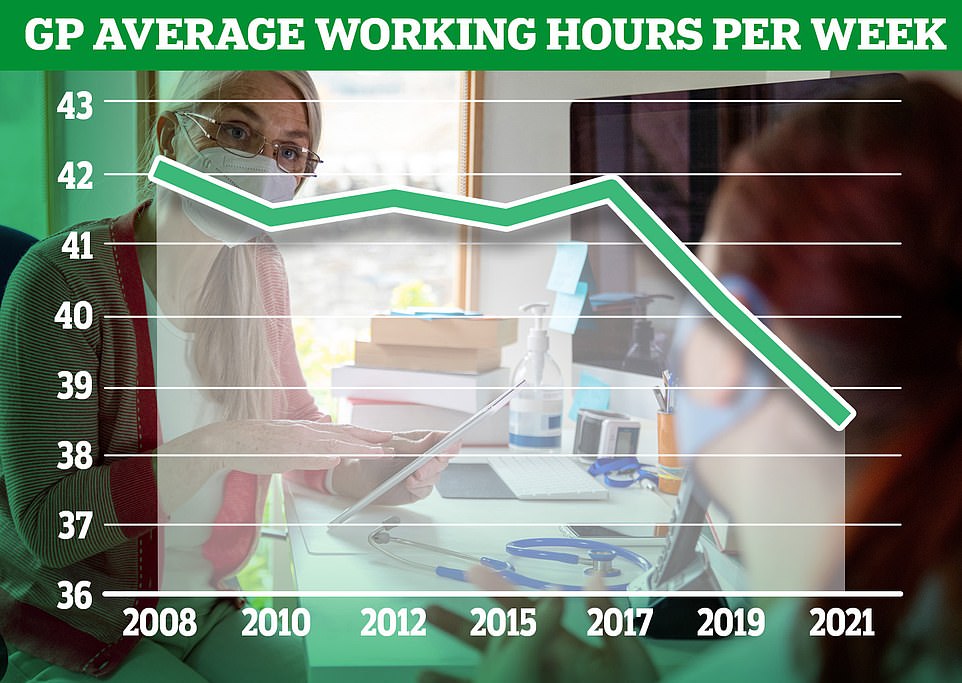 Patient groups have been raising concern over patient access to GPs.

Louise Ansari, national director at Healthwatch England, said: ‘People are still telling us about difficulties getting through to their local practice, with online booking systems, long waits on the phone and a lack of face-to-face appointments providing them with challenges.

‘GP services are often the first port of call for people who need care and so the lack of easy access puts people’s health and wellbeing at risk and increases demand on overstretched hospitals — both from those who cannot get a GP appointment so seek care at A&E, and from people who now need more advanced care and treatment because they were unable to get help sooner.

‘We have called on NHS England to undertake a formal review of the ways people access general practice to make sure they work for everyone.’

A Department of Health and Social Care spokesperson said: ‘We are hugely grateful for the care GPs and their staff provide to patients and we are working hard to support and grow the workforce.

‘There were over 1,400 more doctors working in general practice in March 2022 compared to the same time in 2019 and a record-breaking number started training as GPs last year.

‘We have invested £520 million to expand GP capacity during the pandemic, on top of £1.5 billion until 2024 and we are making 4,000 training places available for GPs each year, helping to create an extra 50 million appointments a year.’