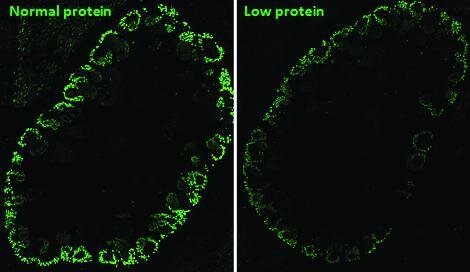 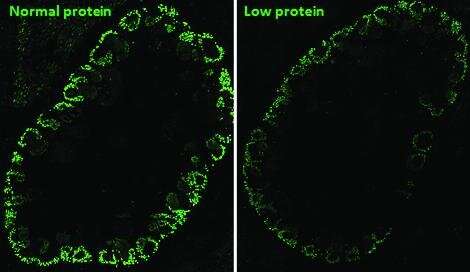 Besides being underweight, babies born to women whose diet lacked sufficient protein during pregnancy tend to have kidney problems resulting from alterations that occurred while their organs were forming during the embryonic stage of their development.

In a study published in PLOS ONE, researchers affiliated with the University of Campinas (UNICAMP) in the state of São Paulo, Brazil, discovered the cause of the problem at the molecular level and its link to epigenetic phenomena (changes in gene expression due to environmental factors such as stress, exposure to toxins or malnutrition, among others).

According to the authors, between 10% and 13% of the world population suffer from chronic kidney disease, a gradual irreversible loss of renal function that is associated with high blood pressure and cardiovascular disorder.

The study, conducted at the Obesity and Comorbidities Research Center (OCRC), resulted from Ph.D. research by first author Letícia de Barros Sene with a fellowship from FAPESP.

OCRC is a Research, Innovation and Dissemination Center (RIDC) funded by FAPESP.

In the article, the researchers describe the molecular pathways involved in the proliferation and differentiation of embryonic and fetal kidney cells. They obtained this knowledge by sequencing microRNAs (often called miRNAs) from the offspring of rats fed a low-protein diet while gestating. MirRNAs are small non-coding RNAs that regulate gene expression.

“We know low-protein intake during pregnancy tends to lead to a 28% decrease in the number of the offspring’s nephrons, the structures that filter blood in the kidneys. The resulting overloading of nephrons has several consequences. In the case of rats, pups become hypertensive only ten weeks after birth, when they are still considered young,” Patrícia Aline Boer, a member of the OCRC team and last author of the article, told Agência FAPESP. A healthy kidney has about a million nephrons.

There has been a great deal of research in recent decades on the links between maternal health during pregnancy and child development, especially focusing on a field known as developmental origins of health and disease (DOHaD).

“In humans, these links were first observed after World War Two as a result of what’s known as the ‘Dutch famine’ [Hongerwinter], when the Nazis blocked food supplies to the Netherlands. Scientific studies showed that babies born to women who starved while pregnant in this period were underweight and developed high blood pressure, alterations in response to stress, heart problems, propensity to diabetes, and increased insulin resistance,” said Boer, who is president of DOHaD Brazil.

Since then, this epigenetic phenomenon has been studied in greater depth using animal experiment models. To understand at the molecular level what triggered the reduction in the number of nephrons, the OCRC researchers analyzed expression of miRNAs and target genes in fetal kidneys (metanephros) of rats at 17 days of gestation.

“We know the drop in the number of nephrons isn’t a genetic but an epigenetic effect,” Boer said. “It’s caused by something in the environment. In this case, gene expression is altered by the stress of hypoproteinemia. The DNA sequence doesn’t change. The expression of some genes in the offspring is altered, and the alteration can be heritable—it can be transmitted to future generations. We studied mirRNAs because they’re very important to genetic expression and alterations not associated with changes in DNA.”

Compared analysis between rats fed a regular protein diet (17% of daily calorie intake) and a second group fed a low-protein diet (6%) during pregnancy revealed alterations in 44 miRNAs—seven of which in genes associated with the proliferation and differentiation of cells essential to nephron development, researchers found. Genetic sequencing, immunohistochemistry and morphological analysis demonstrated that maternal protein restriction changed the expression of miRNAs and proteins involved in renal development as early as the 17th day of gestation.

“Previous research showed a 28% reduction in nephrogenesis, and in our study, there was a 28% decrease in the cells that give rise to nephrons. The proportion was the same, which means there must be some kind of signaling during the embryonic period that the organ has to adapt to a low-protein intake,” Boer said.