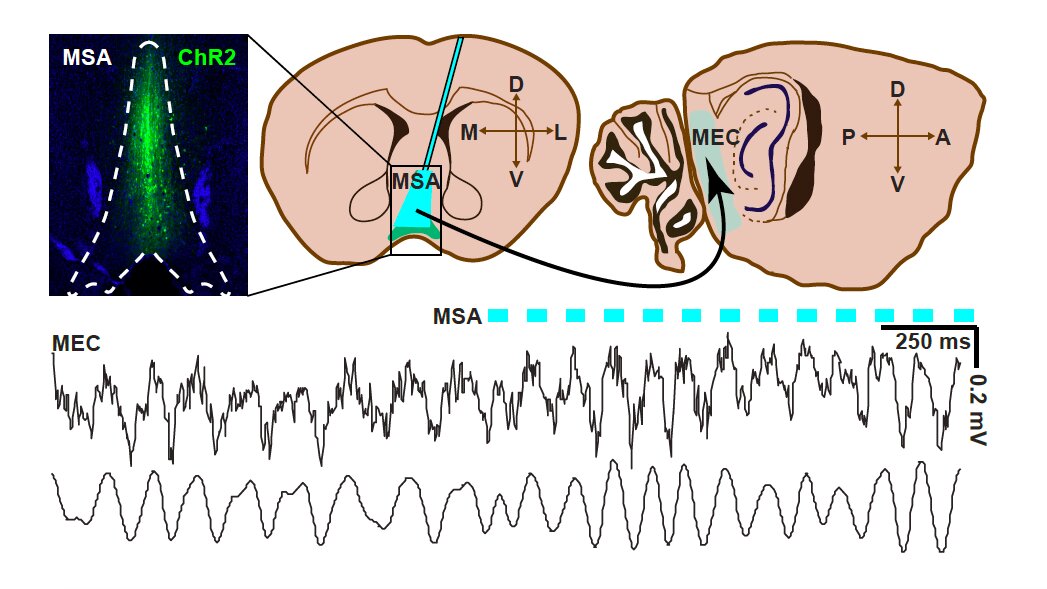 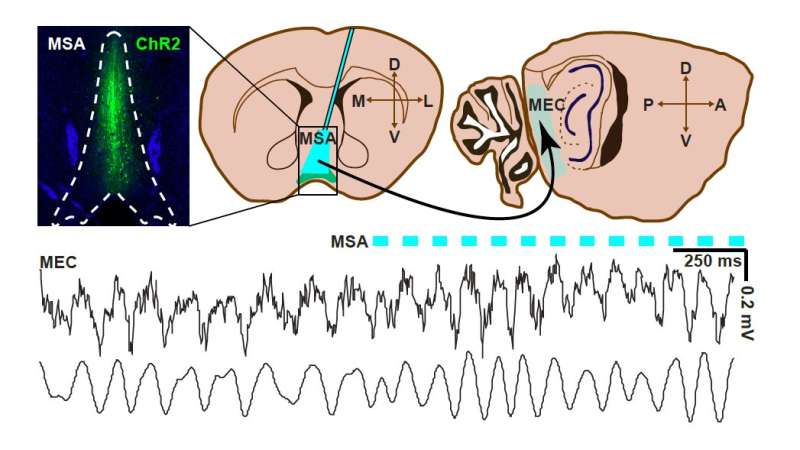 Past research suggests that brain oscillations may support different cognitive functions by coordinating spike timing inside and across different brain regions. However, the role that the timing of these oscillations plays in specific neural computations is still unclear.

Researchers at University of California, San Diego carried out a study investigating the role of theta oscillations in the entorhinal cortex and hippocampus, two brain regions known to be involved in learning and memory consolidation. Their paper, published in Nature Neuroscience, shows that neuronal activity in these areas of the brain strongly relies on rhythmic and precisely timed theta oscillations.

Previous studies have collected significant evidence suggesting that in all major psychiatric and neurological diseases, the patterns of brain oscillations are altered. This has thus raised the question of whether brain oscillations may be vital for key cognitive functions.

So far, investigating this question has been challenging, as manipulating oscillatory patterns in the brain can often also increase or shut down neuronal activity. This makes it harder to clearly distinguish between the contribution of precisely timed oscillations to cognitive function and the contribution of normal or ‘baseline’ brain activity.

“We and others previously found that manipulations of the medial septal area can be used to alter the oscillatory patterns across large portions of the brain,” Stefan Leutgeb, one of the researchers who carried out the study, told Medical Xpress. “We also found that an optogenetic method that is targeted to a subset of medial septal cells is particularly well suited because it does not result in major changes in other activity patterns, such as the firing rate.”

Leutgeb and his colleagues used optical tools to manipulate oscillations in the mouse brain. More specifically they delivered light to the brain of mice using a fiber optic. This light activated a light-sensitive ion channel that originates from algae but can also be expressed in mammalian cells using genetic tools. The researchers found that the activation of this channel in medial septal cells resulted in the control of rhythmic neuronal activity in the mice’s entorhinal cortex and hippocampus.

“Because light can be turned on or off instantaneously, we were able to turn on the rhythmic optical stimulation during only particular phases of a task, in our experiment during the phase when information that the mice needed to later remember was available,” Leutgeb explained. “During later phases, when the mice needed to keep the same information in their memory, the light stimulation was off, and oscillations were therefore back to normal.”

In other words, Leutgeb and his colleagues found that theta oscillations were needed while the mice encoded new memories. On the other hand, they observed that memory retention, at least over short intervals like those examined in their experiment, did not require precisely generated oscillation patterns, which are a key feature of ongoing brain activity.

“Interestingly, at many stimulation frequencies and during different phases of the task, we did not observe memory deficits in the mice, even though the artificially paced neuronal activity patterns were substantially different from the brain’s usual activity patterns,” Leutgeb said. “This shows that we can devise brain stimulation techniques in which the beneficial effects outweigh unintended effects on cognitive function.”

The findings gathered by this team of researchers could have many important implications. In fact, their work proves that it is possible to study the impact of brain oscillations on different cognitive functions without adversely impacting neuronal activity. Ultimately, it could thus inform future studies examining oscillation patterns in the brain.