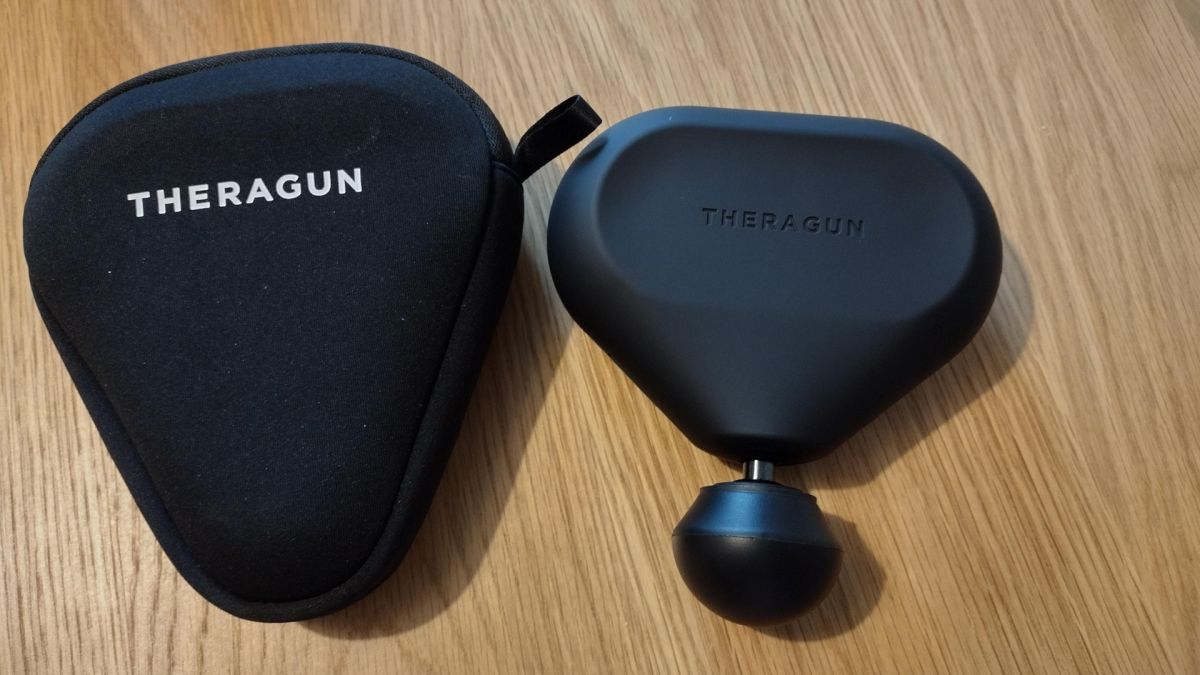 In this Theragun Mini review, we look at how this promises to be an ultra-portable, on-the-go treatment in Therabody’s most compact design. Our review looks at the features and functionality of this electric massage gun, while testing out its performance at home. We’ll also see what users make of their Theragun Minis, by looking at the latest reviews.

The Theragun Mini has three speeds with a maximum PPM of 2400 PPM. It features a lower amplitude than its stable mate, the Theragun Pro, offering 12mm in comparison to the Pro’s 16mm. This lower amplitude may disappoint Theragun lovers who want a similar experience to the Pro but in a portable design.

The massage gun also comes with a soft zippered case to store the gun. A charger is also provided. There’s just one head attachment, however – the universally pleasing ball head attachment.

At just 1.43lbs, the Theragun Mini is one of the lightest massage guns we tested, so if you’re after a gun you can take almost anywhere, this may be the perfect fit for you.

The Theragun Mini comes in a recyclable cardboard box. The plastic molded packaging inside also appears to be recyclable.

The gun itself comes charged and ready to go, encased in a triangular, zippered pouch. Beneath the case is the charger and a user manual.

Weighing in at 1.43lbs, the Theragun Mini is around half the weight of the much larger Theragun Pro, and one of the lightest massage guns we tested at home. This lightness makes the design more acceptable, which is a solid triangle designed to fit comfortably into the palm of the hand. Not all users will enjoy this design, given that there’s no way to wrap your fingers around a shaft for a firm grip. However, even with smaller-than-average hands, we were able to use the Theragun Mini for a fairly long session without any problems or strain.

A range of colors is available, including black, white, red, desert rose, and a PSG-themed device. The Theragun Mini comes with just one attachment – the standard ball head. Given the price of the massage gun, this feels a little mean, although the ball head is a great catch-all attachment that people tend to use most of the time with their massage guns. However, you can always buy separate attachment heads or use your heads from another Therabody device on the Mini if needs be.

The gun features just one button that allows users to power it on and toggle between the three speeds. There’s no screen to show you the device’s speed, unlike the Theragun Pro; three lights indicate your speed level instead.

Just like the Theragun Pro, the head attachment is easily removed and attached. The battery  life allows for 2.5 hours of use without having to recharge. A full recharge takes 80 minutes. We didn’t have the time to test this fully at home, but found the massage gun charged quickly and gave a great performance during massage sessions, which totaled around an hour.

The Theragun Mini features three speed settings, including a lower intensity of 1750 PPM, a medium setting of 2100 PPM, and the highest setting of 2400 PPM. It’s easy to toggle between the settings to select your speed level.

The amplitude on the Theragun Mini is 12mm – 4mm less than the Theragun Pro. However, it still feels as if it’s getting deep into problem areas during operation, especially around the shoulder blades, lower back, and quads after a long run.

Although the Theragun Mini is limited in functionality, given its single head attachment, it does a good job of pummelling and soothing muscles in equal measure.

Unlike the Theragun Pro, the Theragun Mini does not have Bluetooth connectivity. This means it won’t connect with the Therabody app and allow you to sync your device. Although you can still follow along with the routines, tutorials and programs (including guides for first-time users, as well as specific ailments such as sciatica or carpal tunnel syndrome) it won’t let you connect and follow along in real time.

This could be pretty frustrating if you’re already an avid user of a Therabody device and you’re just using the Theragun Mini for convenience because it’s so portable.

During all our massage gun tests, we measured the decibel levels of each setting to see how noisy each massage gun was during operation. The Theragun Mini comes with three speed settings:

At level 1, the gun clocked in at 57 decibels. Level 2 was 59 decibels and level 3 was around 62 decibels. At its lowest level the Theragun Mini is around the same level as normal conversation, and at its highest it’s comparable to a dishwasher or washing machine. Compared to other massage guns we tested, that’s pretty loud, although not as loud as the Theragun Pro.

However, it’s hard to fault what the Theragun Mini can do. Despite being a small and lightweight device, it packs a real punch during a massage. We couldn’t discern a great deal of difference between the Mini and the Pro on its highest level setting, apart from the lack of optional extra heads.

The big draw with the Theragun Mini is its portability. You can pop it in your gym bag, hand luggage, or even your purse without it taking up too much space. It was by far the most portable massage gun we tested, even compared to the lightweight Hypervolt Go. It’s also very sturdy, so you don’t need to worry about it being jostled around in your bag.

There’s also something compelling about the simplicity of the Theragun Mini. You can get a great massage from just the one head attachment, and it’s incredibly simple to use and operate.

And of course, despite not being fully connected, the Therabody app is a great resource for anyone with a massage gun. You can follow along with the routines very easily, even if you can’t connect your device via Bluetooth.

Theragun Mini review: what’s not so good about it?

There does feel as if something is missing from the Theragun Mini, especially in comparison to other massage guns that are cheaper, yet offer a host of extras. One or two more head attachments would make a big difference to the user experience, as would a Bluetooth connection to the Therabody app.

It’s also a relatively expensive device, given what you get for your money. For roughly the same price you could get more power, more attachments and a carry case if you wanted to. The Theragun Mini feels a little like it’s trading off a well-respected brand in order to tempt you into buying the Theragun Pro, rather than providing a truly viable alternative that’s more accessible.

The Theragun Mini is a fave with Amazon users, getting the full five stars from 89% of reviewers. They rate how easy it is to use straight out of the box, and how portable it is. One user goes so far as to say, “I actually have had all three versions of the Theragun at some point and this one is probably the best”.

Negative reviews, of which there are few, cite problems with their Mini failing to work after a short time or problems charging. These appear to be individual problems with specific devices though, so overall the Mini gets a thumbs up from the majority of people who make the purchase.

Should you buy the Theragun Mini?

If you’re looking for a portable massage gun that you can take anywhere and everywhere, the Theragun Mini is a great buy. Effortless to use, sturdy, and with a wealth of great technology behind it, the Mini is an investment that will give you years of great service.

However, it’s expensive for what you get. And you can’t help feeling a little short-changed when comparing the Theragun Mini to cheaper alternatives that offer more PPM and extra attachment heads.

If this product isn’t for you

If you like the Therabody brand, and you have a bigger budget, why not take a look at the Theragun Pro? With six attachment heads, a carry case, and the full experience of the Bluetooth-connected Therabody app, it’s a massage gun that’s hard to beat.

If you need a massage gun that’s portable like the Theragun Mini, but have a smaller budget, the Hypervolt Go is compact and light, plus it comes with a companion app to guide users through techniques.

If you’re after a professional massage experience, the HoMedics Pro Physio comes with six massage heads, and a heated head feature that delivers warmth directly to muscles.

Joanne Lewsley is a UK-based freelance writer and editor, covering health and lifestyle news and features. She creates evidence-based health and parenting content and has worked with some of the world’s best-known brands and websites, including BabyCentre UK and Medical News Today.