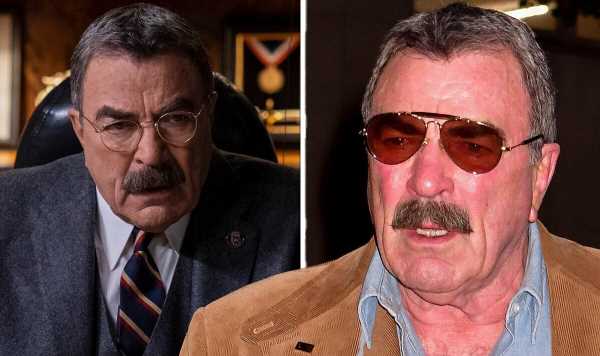 With the rumour mill in full force, many viewers have been concerned that Selleck might be giving up his role as NYC Police Commissioner Frank Reagan on the hugely successful police drama Blue Bloods. After beady-eyed fans noticed that the actor was limping, an unnamed source also stated that the star was becoming “tired of the Hollywood grind”, with the show taking “more and more out of him every season”. Contrary to these comments, CBS has confirmed the return of the show for season 13, with Selleck firmly onboard. In fact, speaking about his role on the show, the actor commented: “It’s a blessing! I love what I do, and I want to keep doing it.”

With no firm plans to retire any time soon, Selleck did admit that his body is not what it once was, and problems to do with old age and the long-term effects of stunt work have taken a slight toll.

When asked if his body has ever let him down, Selleck replied: “Well, it lets me down from the point of view that I can’t do, or won’t do, what I used to.

“You know, my back’s kind of messed up. When you do stunts in movies – I do a lot of them – you’re taking a risk, but you’re also sitting around a lot. So you might do a fight scene, and then you sit in your chair, and it’s not like you have a personal trainer saying, ‘Okay, we’re ready to go, but Tom needs 10 minutes of stretching and warm-up.’

“And I think the price – I see it with peers, I talk to them sometimes. You just see the price of stunts. They weren’t that hard, but I think it’s the stop-and-go of all that stuff.”

Through Selleck addressed these issues, rumours once again began that the star was suffering from chronic arthritis with reports emerging that in some scenes a stunt double of the actor had to be used.

An unmanned insider claimed at the time: “Macho Tom is falling apart before our eyes”.

But again, when speaking to GQ, Selleck seems to put these rumours to bed, explaining that he keeps active in his old age by working on his 63-acre ranch. He said: “I don’t like to go to the gym.

“I have a 63-acre ranch, and I do not all, but a lot of, the grunt work. Clearing brush, planting trees. We’ve got about a hundred ancient oaks I planted. I’ve probably planted a thousand trees myself.”

In addition Selleck credited “activity” as one of the main things that has helped him “age well”. Activity and not dying his hair.

“I played beach volleyball, some very competitive softball. I loved baseball. I never liked golf; I golfed because I could get to see my dad,” the actor continued to say.

“One thing I didn’t do is dye my hair. I’m sick of people telling me I dye my hair! This is it, man. I’ve got grey hair in there.

“At my age, turning grey is kind of a blessing, where it softens all of the other horrible things it does to you, but it is what it is.

“I even added grey in my moustache for Blue Bloods. They do it with a little pencil in makeup—it takes a long time to do it right. But then, the digital camera they were using on the show didn’t even show it. But I’m a little greyer now, so that’s good.”

Age UK, a leading charity, explains that regular activity can lower an individual’s risk of heart disease, stroke, some types of cancers, depression and dementia. But the benefits of activity and exercise when you get older are not just physical.

In addition, moving more helps thinking skills such as problem-solving, decision-making and remembering words and facts. This contributes to individuals being able to live a far more independent life and in better moods.

Due to this, medical bodies such as the NHS recommend adults aged 65 and over should aim to be physically active everyday. Activities should be done at least twice a week and aim to improve strength, balance and flexibility. As well as this, at least 150 minutes of moderate intensity activity or 75 minutes of vigorous activity should be done.

Remaining physically active is proven to help aches and pains that develop naturally as individuals age. Bupa explains that over time muscles get smaller and lose some of their strength. Bones also start to get weaker over time. But exercise can help to keep bones and muscles stronger for longer.

Joint pain, which commonly affects the knee, shoulder, hip, elbow or even back can also be helped by exercise or physiotherapy.

Light activity may be easier than some people think, with some of the most common examples including:

For those already active, more intensive activity could include sports like riding a bike, dance fitness or water aerobics. Whereas other more accessible activities include pushing a lawn mower, walking and hiking.