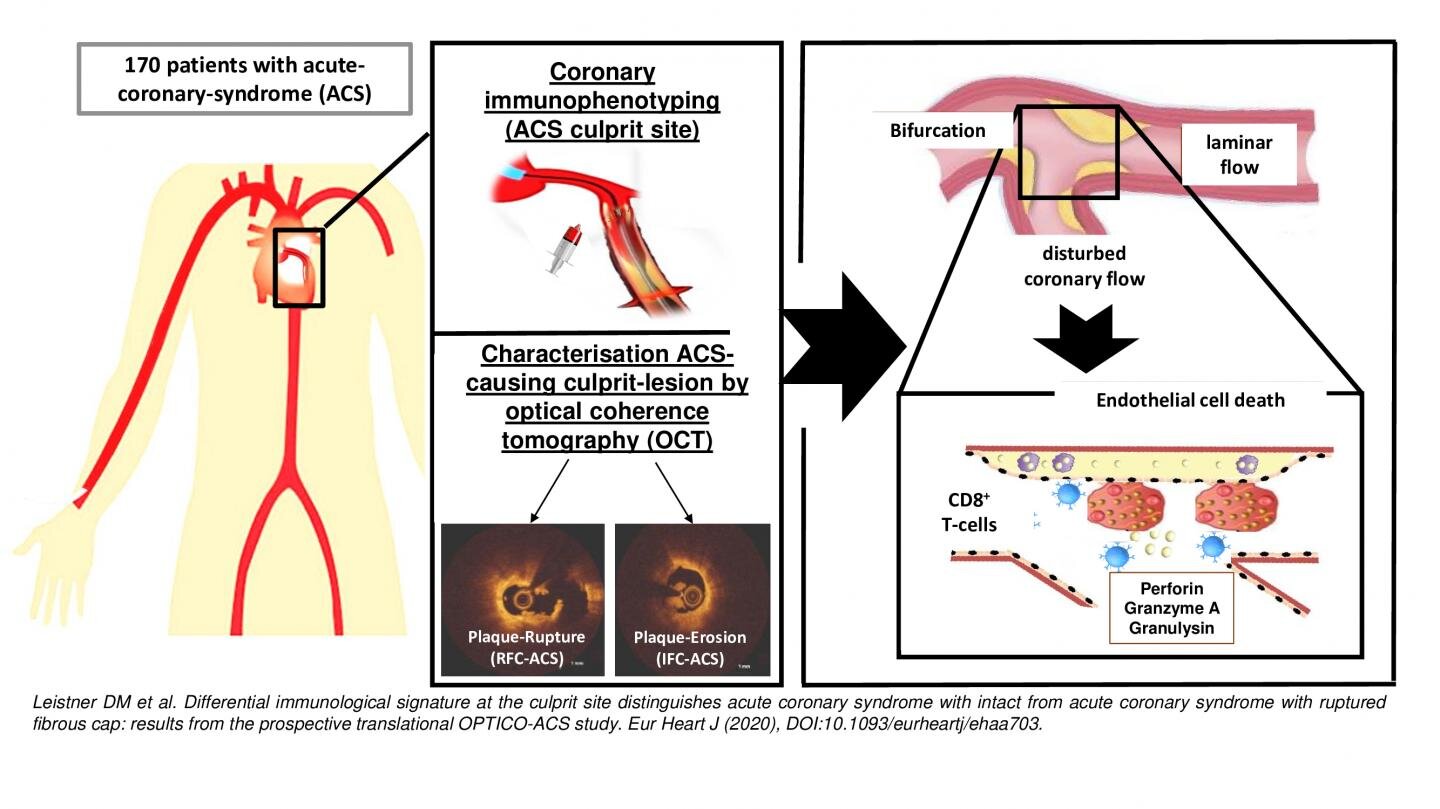 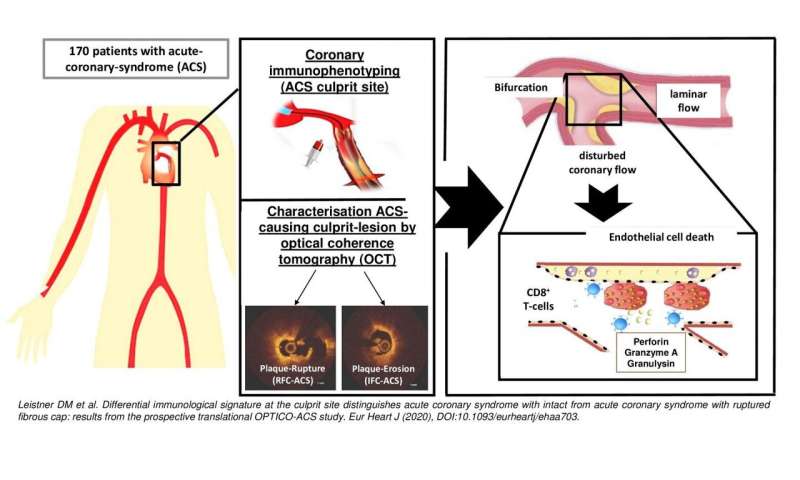 Heart attacks strike suddenly and have a range of different triggers. Researchers from Charité – Universitätsmedizin Berlin and the German Centre for Cardiovascular Research (DZHK) were able to uncover a further underlying cause. Studying arterial deposits (plaque) in patients with acute coronary syndrome, the researchers found that, in some patients, these were characterized by activated immune cells which, as a result of altered flow conditions within the vessel, had accumulated on the interior arterial wall, causing damage to the arterial lining. The researchers’ report on this novel immune system-mediated pathophysiological mechanism has been published in the European Heart Journal.

Acute coronary syndrome (also known as heart attack) is a life-threatening condition which is characterized by impaired blood flow to the heart and is caused by a blockage or narrowing of the coronary arteries. Arterial deposits (known as plaque) represent a major contributing factor, as they can give rise to blood clots, which can detach and block the coronary arteries. What triggers the formation of blood clots—and thus the subsequent heart attack—remains to be fully elucidated. For a long time, researchers had thought that these blood clots were exclusively caused by damage to the fibrous cap, a connective tissue layer which surrounds the deposit and whose rupture results in the release of debris. More recent data, however, suggest that blood clots can also originate from plaques whose fibrous cap remains intact. For the first time, researchers from Charité’s Department of Cardiology on Campus Benjamin Franklin and from DZHK have shown the manner in which this type of ‘plaque erosion’ can help trigger heart attack.

As part of the OPTICO-ACS study program, the research teams—led by study lead Prof. Dr. David M. Leistner and Head of Department Prof. Dr. Ulf Landmesser—investigated a total of 170 patients with acute coronary syndrome. The researchers found that, in approximately 25 percent of patients, the acute coronary syndrome had been caused by plaque erosion rather than plaque rupture. “Our study is the first to elucidate the manner in which plaque erosion can trigger heart attack. Areas of plaque erosion were characterized by the presence of special, activated immune cells known as T-lymphocytes. Altered arterial blood flow enables these cells to accumulate in the coronary artery wall, causing damage to the inner lining,” says first author Prof. Leistner.

Using special high-resolution imaging technology known as optical coherence tomography (OCT), the researchers were able to visualize the heart attack-causing plaques for classification into the ‘plaque rupture’ and ‘plaque erosion’ trigger categories. Using an aspiration catheter, the researchers then removed the blood clots for analysis. They also collected blood samples, which were tested for immune cells and markers of inflammation. Blood clot analysis revealed altered immune cell ratios in approximately one quarter of blood clots, namely those which had originated from sites of plaque erosion. These showed increased levels of CD4+ and CD8+ lymphocytes and their effector molecules, a finding which suggests an inflammatory response that causes damage to endothelial cells in the arterial wall. In these patients, the culprit blood clots were also found near sites of arterial branching, an environment which is known to create altered blood flow patterns. Prof. Leistner adds: “In the hope of reinforcing our patient-based observations—and in keeping with our translational approach—we also used cell culture experiments, which enabled us to confirm our findings.”