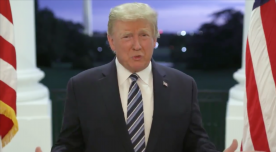 President Trump, who is still infected with the coronavirus, declared in a video released to his Twitter account: "Now I'm better and maybe I'm immune."

Reality check: Though Trump was discharged from Walter Reed Medical Center on Monday evening, White House physician Sean Conley said that the president "may not be entirely out of the woods yet."

Of note: Trump said in the video people shouldn't let the virus "dominate you." It followed his earlier comments posted to Twitter, saying: "Don't be afraid of Covid. Don’t let it dominate your life."

What they're saying: The COVID Survivors for Change, issued a statement criticizing the president for the tweet, which the non-partisan grassroots group called "callous" and "dangerous."

Editor's note: This is a developing news story. Please check back for updates.