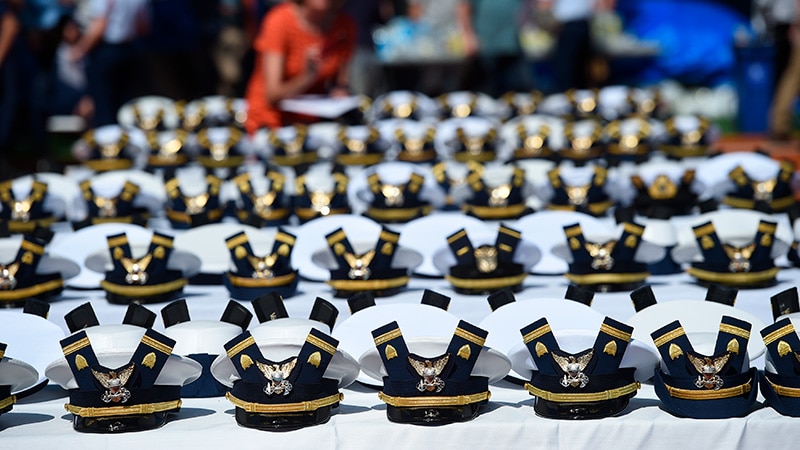 NEW LONDON, Conn. (AP) — The Coast Guard Academy is disenrolling seven cadets for failing to comply with the military’s COVID-19 vaccination mandate, after their requests for religious exemptions were denied and they were ordered to leave campus.

The academy in New London, Connecticut, confirmed the disenrollments Tuesday, The Day newspaper reported. A lawyer for several of the cadets said they were told on Aug. 18 that they had to leave campus by 4 p.m. the next day.

“They were escorted to the gate like they were criminals or something,” the lawyer, Michael Rose, told the newspaper.

“No one helped them with travel arrangements or gave them any money,” said Rose, based in Summerville, South Carolina. “One had to get to California, one to Alaska. One’s estranged from home and living out of his truck, according to an email I received describing his situation.”

Rose said two of the seven cadets had no homes to return to.

The cadets’ names have not been released. Rose said academy officials were “particularly mean-spirited” and could have waited until pending lawsuits challenging the military’s COVID-19 vaccination requirement were concluded.

In one of those lawsuits, Rose is representing more than 30 plaintiffs, including military personnel and service academy cadets, in litigation pending in federal court in South Carolina. Several of the cadets are from the Coast Guard Academy.

Defense Secretary Lloyd Austin last year made the COVID-19 vaccinations mandatory for service members, including those at the military academies, saying the vaccine is critical to maintaining military readiness and the health of the force.

At least 98% of all active duty military members are either fully or partially vaccinated, according to the military branches. To date, about 5,700 service members have been discharged from the Army, Navy, Air Force and Marine Corps for refusing to get vaccinated.

Earlier this year, three cadets at the U.S. Air Force Academy who refused the vaccine were not commissioned as military officers but were allowed to graduate with bachelor’s degrees, while the other military academies said all their cadets were in compliance with the vaccine mandate.

A Coast Guard Academy spokesman, David Santos, said the seven cadets there were found to be in violation of the Uniform Code of Military Justice for disobeying a superior officer and failing to obey an order or regulation. The cadets requested religious exemptions that were denied by school officials, he said.

Their disenrollments are in the process of being finalized, he said.